The Changing of our Colors

Our fourth factor was to symbolize mourning for the death of so many whales due to Japanese harpoons in the Southern Ocean Whale Sanctuary.

Meanwhile we have other challenges to deal with including shark finning, tuna poaching, and the slaughter of seals, sea turtles, and small cetaceans. And with campaigns before us in the Mediterranean, Palau, Galapagos, and across the Indian Ocean, Equatorial Africa, and the South Pacific, the color black is not the most comfortable. We now need to reflect heat instead of absorbing it. 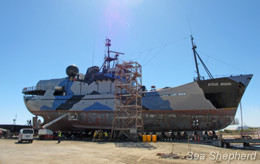 The Steve Irwin with her new camo paint job.
Photo: Michael MorrellAnd so we are returning to a color scheme we utilized back in 2002 during our anti-poaching campaigns off Cocos, Malpelo, and the Galapagos Islands. The Steve Irwin has now been repainted, with the Bob Barker in process, in marine tropical and semi-tropical camo giving our ships a somewhat military appearance, so that we can continue to be intimidating but the lighter colors will make the interior of the ships much cooler.

The Gojira will be painted metallic silver, for reasons we will reveal in late May when we will announce a name change to the ship. It’s a great name, Gojira, Japanese for Godzilla, meaning Gorilla whale, BUT the only thing scarier than Godzilla itself is Godzilla’s lawyers and we have been told that we do not have the rights to use the name.

Not a problem! We still had the opportunity to unleash Godzilla on the Japanese whalers and that was super cool especially when the whalers issued a distress signal from the Southern Ocean saying, “We are being attacked by Gojira (Godzilla).” That one radio broadcast was priceless, followed up with our playing of “Black Samurai” by Alpha Blondy over the radio back to the Japanese fleet. We thought it was hilarious, but the whalers did not seem to have much of a sense of humor that we could tell.

The new name and logo for our fast interceptor scout vessel will be unveiled next month during the Cannes Film Festival, just before we launch Operation Blue Rage II to oppose the bluefin tuna poachers.

Although we will be keeping our black and white shirts and jackets, the crew will also wear the camo uniform look as well. And speaking of colors, the Sea Shepherd ships will continue to fly the tricolored flag of the Netherlands, in addition to the Aboriginal flag of Australia and the Maori flag of Aotearoa. Also, our ships are the only ones in the world that fly the flag of the Five Nations of the Iroquois Confederacy, presented to us by the women of the Long House Up the Hill of the Mohawks of Kahnawake. We will also fly the flag of Palau on the Bob Barker during our anti-poaching patrols in the waters of the Republic of Palau.

Never stagnant always evolving in a campaign to champion life over death, compassion over greed, and conservation over destruction. 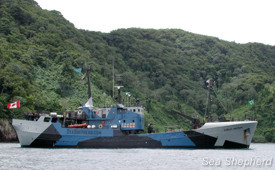 The historic Farley Mowat in the waters off the Cocos Islands