The Boarding of the Shonan Maru No. 2 was a Huge Success

The Forest Rescue men were able to actually take photographs of the schematics of the Shonan Maru No. 2, plus onboard security equipment. Damn good job of espionage boys. The question now being asked is, why was a Japanese vessel allowed to bring semi-automatic weapons and concussion grenades into the Australian Contiguous Zone, which is under the exclusive control of Australian Customs and Immigration, without declaring the weaponry onboard?

From the Captain and crew of the Steve Irwin to the three Forest Rescue men: “Well done – your efforts were successful.”

Australian Attorney General Nicola Roxon now claims that the recovery has cost one million dollars. It would be interesting to see what the break-down of expenses is. Considering that she failed to justify $190,500 of her own government expenses, I’m not sure if we can put much trust in her financial reporting competence. She is wildly off the mark.

Basically, we’re only talking ship operating expenses for fuel and crew costs for a week. However the ship was already at sea on an anti-poaching patrol mission looking for poachers in areas where they have not found poachers for some time. Suddenly they get redirected eastward and what do they find – the muscle ship of a fleet of poachers holding three Australian citizens onboard. Of course they did not do anything regarding the actual poaching, but they did recover our three Australian heroes and returned them home to Western Australia. This is about six days of operations. They could not have burned one million dollars worth of fuel in that time as claimed by the Attorney General. In fact, the most they could have burned is only ten tons of fuel a day- about $10,000 a day worth of fuel - even less when you consider that they don’t have to pay tax on that fuel. Therefore what we’re looking at is $60,000, at most, for fuel costs and the crew would have been paid nonetheless.  This is a far cry from one million dollars. 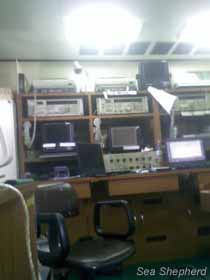 The communications room of the Japanese whaling fleet's security vessel, the Shonan Maru No. 2 Since 1997, Australia has spent over 14 million dollars rescuing foreign yachtsmen. Not one of them was asked to repay the government.

If the Ocean Protector was doing what the government promised it would be doing – monitoring illegal whaling activities in the Southern Ocean- it would not have had to go as far to recover the three men.

In 2002, the Australian Government signed a $553 million dollar contract to build a new fleet of 12 navy patrol boats. The question is, where are they and what are they doing, other than stopping poverty-stricken environmental and political refugees from reaching the shores of Australia?

In 2006 Uruguayans Alfonso Dacruz Amoedo, 44, and Enrique Dominguez, 41, were fined $65,000 and $53,000 respectively in the District Court in Sydney for poaching Patagonian toothfish near MacQuarie Island. They were given a total of $118,000 dollars in fines that they did not pay and they were allowed to keep their ship. Yet this futile exercise cost the Australian government over seven million dollars.

In 2003 the Uruguayan vessel Viarsa I was chased across the Indian Ocean and half way across the Atlantic Ocean by Australian authorities who caught them poaching fish at Heard Island. The chase and trial cost over five million dollars. Despite the 97 tons of toothfish found on board the vessel, representatives for the owners of Viarsa 1 were able to secure an acquittal by a jury in November 2005. After two trials and two years, the seamen were free to return to their home countries.

Considering the excessive cost of fruitlessly chasing poachers, Australia doesn’t have much to show for it.

In the case of the Shonan Maru No. 2, Australia had three of its citizens set free thus avoiding a potential embarrassment for the Labor Government of Julia Gillard.

The government carefully weighed the cost and realized that to set a precedent of having three citizens detained on a Japanese whaling ship -16.2 miles off the coast of Western Australia, taken as prisoners to Japan, and put on trial, would have showcased the moral and legal impotence of the government in Canberra. It would have kept the issue of illegal Japanese whaling in the media for months and Australian citizens would have continually asked what the armed whaling ship was doing in waters that the Australian Federal Court had banned them from.

Politically, the government had no choice but to recover the three men. That decision could have cost them less if they had insisted that Japan return the men to land or transfer them to the Steve Irwin, only 7 miles away from the Shonan Maru No. 2.

In the end, the boarding highlighted Japanese illegal whaling activities in the global media, knocked the Shonan Maru No. 2 off the tail of the Steve Irwin, and gathered valuable intelligence concerning security and ship layout on the whaling fleet’s security vessel. It also deeply humiliated the Japanese Coast Guard that three unarmed Australian men were able to board the security vessel for the fleet, despite the Japanese government spending $28 million dollars to prevent just that. To top it off, the men were freed without charges.

In my opinion, all this counts as a huge success for the movement to end illegal whaling in the Southern Ocean Whale Sanctuary.