The Art of Hunting Whalers

To be fair, the Greenpeace crewmembers were passionate about the cause but they were limited by the bureaucratic restraints of their organization and this revisionist policy of so-called bearing witness. Finally realizing that hanging banners was futile, Greenpeace retreated permanently from the Southern Ocean.

In the early days when I was a Greenpeace director and activist, we didn’t just bear witness to atrocities, we intervened. And that is precisely what Sea Shepherd continues to do. We are not down here to witness the killing of whales, we are down here to stop the killing of whales. Thus far this has been a very good year. The whalers have only been able to slip in a couple of days of whaling with only one harpoon vessel while on the run. We caught them before they began whaling and we have now been chasing the fleet for nearly a month.

But the big challenge is locating them. So how do we do it?

First we know the general area of their illegal operations each year. There are two areas. The first is the Antarctic coast from the South of Tasmania, to the westward coastline to the south of South Africa. The second region, where we are this year, is the Antarctic coast south of Tasmania, eastward to the area just on the other side of the Ross Sea.

Each of these two regions is immense, of course. I prefer the Ross Sea area because the whaling fleet tends to get down into this gigantic Southern Ocean bay and floe ice tends to funnel them into certain areas. We then tend to look at the ocean the way a whale does.

When bank robber Willie Sutton was once asked why he robbed banks, he answered, “Because that is where the money is.”

We say to ourselves, why would a whale go to a certain area? The answer is that is where the krill is. And so we look for plankton blooms, which has a great deal to do with ocean currents and temperatures. We also study the ice charts. 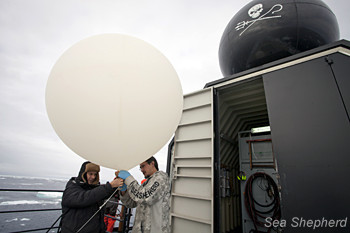 Crewmembers prepare the surveillance weather balloons for launch.
(photo: Barbara Veiga)With our two ships that are equipped with a helicopter deck, we place our ships in a search formation and patrol with the helicopter that extends our range. This year we also deployed a new technology of using weather balloons, which is working quite well. The weather balloons are deployed with a camera feature, along with equipment to detect radio and radar signals. Rising as high as 30,000 feet in the air, the balloons send back some very valuable data that has proven to be very instrumental in finding the whalers this season.

The best tactic for defending whales down here in the Southern Ocean is to keep the whaling ships on the run, while burning fuel and catching very few whales.

The key to ending whaling is an economic one. Getting the Japanese people onside is all well and good but it guarantees nothing, as the whalers don’t care about public opinion. As a Canadian, I know that the majority of Canadians oppose the horrific annual seal slaughter, yet the Canadian government continues to subsidize the industry. Why? Because it is never about what the people want, it is what the bureaucrats and the corporations want.

However, cutting profits is something they do understand, and they do notice. And Sea Shepherd has considerably cut profits and will do so more than ever this season. This is the reason that the Japanese government has been reaching out at the highest diplomatic efforts to Australia, the United States, Canada, New Zealand, and the Netherlands in a desperate effort to shut down Sea Shepherd.

The best acknowledgement of our effectiveness comes from the Japanese Fisheries Agency and the Institute for Cetacean Research (or Removal as I like to call it). Both these groups have denounced Sea Shepherd for cutting their kill quotas and their profits. Critics tend to only have opinions without much substance, and our critics are entitled to say what they like about our effectiveness. We need only look to our real enemies – the whalers, for validation of our strategies and tactics. According to the whalers, Sea Shepherd is hurting them.

I must admit that I take a great deal of pleasure in watching that foul evil floating abattoir the Nisshin Maru running in desperation every time they see us. That desperation was never more evident than yesterday, when they smashed through the thick and dangerous ice fields in an attempt to get away from us.

We are also working on acquiring a couple of long-range drones fitted with cameras and detection equipment. This year the whalers can run, but they can no longer hide – from our balloons!