Tears for the Land of the Rising Sun

Nature does not play favorites and just as the earthquake struck New Zealand recently, the fires ravaged Australia two years ago, and the tsunami struck India and Thailand not so very long ago, the message is clear - we all share the dangers of living on the water planet called earth.

In the face of such peril from the forces of nature, we are all equal.

I have heard many people say that Japan’s tragedy is karma. People who say such things do not understand the concept of karma. This earthquake struck Japan purely on the basis of geography and geology.

I experienced the California Northridge Earthquake of 1994 and the eruption of Mount St. Helens in 1980, and I have thus seen firsthand how terrible and awesomely devastating a force of nature can be.

What has happened in Japan is horrific and how we respond to it reveals the integrity of our hearts.

When the earthquake struck, I knew that close friends of mine were in serious danger. Scott West and the Cove Guardian volunteers were monitoring porpoise hunters on the dock in the town of Otsuchi, one of the towns that was utterly destroyed by the Tsunami. 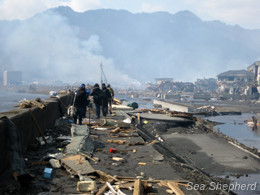 Devastation by the tsunami in OtsuchiWe did not know for over 40 hours if they were alive or dead. Our people onshore and the average citizen of Japan were equals in the face of this tragedy. Japan did not deserve this disaster nor should anyone ever imply that they did.

Thanks to quick thinking and an understanding of the situation they were in, the Sea Shepherd crew headed for high ground when they saw the waters receding. They made it, despite the fact that from the time of the quake until the Tsunami struck was no more than eight minutes.

They spent a very cold night on a hill and had no choice but to watch the total obliteration of the town below them. They saw a woman scream for help and were powerless to assist her. They shared power bars and water with a Japanese girl stranded on the hill with them. In the morning they walked for miles through utter devastation, past bodies, and debris; they found compassion and concern from people who had lost everything. People offered them food and the warmth of a fire. Our people left them blankets.

Our crew will never forget what they saw that day and they will never forget the good people they met and with whom they now share a rare bond, united by experiences beyond the comprehension of people who were not there.

The Sea Shepherd Cove Guardians have been in Japan since September 2010 monitoring the slaughter of dolphins. It was by chance, that the day they arrived in the north to investigate the slaughter of the Dall’s Porpoise, was the day that found them standing on the dockside before the full impending assault of the tsunami, when the earth unleashed its enormous power.

Sea Shepherd and the Cove Guardians both know that the brutal killings of the dolphins and porpoises do not reflect the behavior of all Japanese people. The Guardians were not there to oppose Japanese people – they were there to oppose the killing of dolphins. The people who kill the whales and dolphins are not the same people they found huddled by fires amidst the debris, people who shared their pain and the horror of what occurred that day.

Meanwhile in Taiji, 24 dolphins were dashed upon the rocks by the tsunami. The cruel fishermen who had captured them made no attempt to free them, or to give aid to them after they were injured. After the tsunami had receded, these fishermen were what they were before the tsunami struck – uncaring, insensitive, and cruel. And in no way did they reflect the compassion and the innocence of the people the Cove Guardians encountered in their ordeal in the north.

The Sea Shepherd Conservation Society opposes and will always oppose the killers of whales and dolphins who are Japanese but we do not and never have opposed Japanese people themselves, just as we oppose the whalers of Norway, yet we spent three days searching for three Norwegians lost in the Ross Sea only a few weeks ago.

Sometimes we are separated by differences and sometimes we are united by common ideals of respect and compassion. Life is complex and it can be tragic, but it is also exceedingly beautiful and it is profound tragedies like this that illustrate, that indeed, none of us are islands onto ourselves and that yes indeed, when the bell tolls for one it tolls for all of us.

Our sympathies lie with the families of the victims. We are thankful our people have returned from this disaster, shaken but unharmed. We wish to see Japan recover from the assault by earthquake, tsunami, volcanic eruption, and nuclear meltdown of three of their reactors. For what has happened in Japan, has happened to others in the past and will happen to others in the future.

In the face of this disaster we acknowledge that we are all earthlings sharing the dangers and the treasures, the pain and the rewards, and the sadness and the joy of being alive on this blue and white jewel and its journey through space.

We mourn for the whales and dolphins killed by the hands of a few cruel people and we mourn for the thousands of human beings lost and so terribly injured physically, mentally, and emotionally by this unprecedented natural disaster.

To the Japanese people – our thoughts are with you. We hope that so many of those who are reported lost, are found, that homes will be rebuilt, that families will be reunited, and the people will be fed and given shelter, and that the sick and the injured will be taken care of and that from out of the mud and the despair, the debris, and the devastation, that the Japanese people will recover and prevail.