We all know about Pele’s curse on anyone taking a pebble or a bit of sand from Hawaii. What would be left if everyone took some? How does Madame Pele feel about the accursed aquarium trade? While Bill Aila runs kangaroo hearings on reef wildlife, and a few DLNR staffers soak up public outrage like punching bags, and Neil Abercrombie looks the other way, the world is watching Hawaii. Earthjustice is representing the Humane Society of the United States, the Center for Biological Diversity, the Conservation Council of Hawaii, and a cross-section of Hawaii’s people in suing the state—suing the State of Hawaii for Failure to assess reef impact prior to issuing aquarium permits that allow TOTAL EXTRACTION of Hawaii’s marine wildlife. These bogus rules have limits per collector, but no limit on the number of collectors.

These false rules allow six Hawaiian cleaner wrasses per day per collector—but a Hawaiian cleaner wrasse dies very quickly in captivity and Hawaiian cleaner wrasses are slated for protection on the Big Island. How can a species be targeted here and protected there? It’s the money. These rules are based on lies and personal need. These rules would allow 25 Moorish Idols per collector per day. So 23 collectors could take 575 idols in a day, reaching the annual average take in 10 days. Why have a rule that has no meaning or effect? The Oahu aquarium trade wants to protect three butterflyfish species that total 50 fish taken since 1999, but they target three other species already under great pressure. Why? It’s the money. Here’s the kicker- these rules target 260 species. One of those species is the bi-color anthius. This fish brings $70 each online, but Hawaii collectors get about five bucks for them. That’s $8500 for the annual take of this incredible fish. You can’t buy a species for $8,500, but you can sell one. Taking these fish for mainland hobby aquariums is wrong and a crime against the people of Hawaii.

I oppose these rules, and I challenge DLNR to recuse itself on the aquarium trade as long as William Aila is director. This was conflict of interest. Now it’s collusion between public officials and private enterprise.

Public testimony for the lawsuit against DLNR is open until December 19th. Here is a link to the petition where comments may be made: Earthjustice Petition 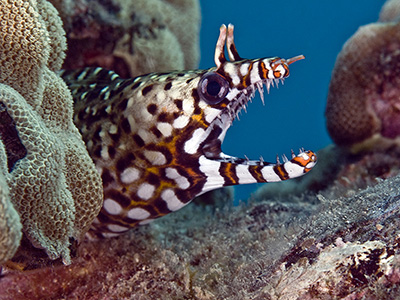 A dragon moray is extremely rare. Can you imagine the value of such a wonder to reef balance, reef beauty, reef experience. But we can't disclose whereabouts on this eel or any exotic species, because aquarium collectors will grab these critters in a blink for sale online. Dragon morays bring $950 each. William Aila now orchestrates aquarium trade entrenchment on Hawaii reefs. Neil Abercombie is MIA--no vision, no political will, no pulse, leaving Hawaii with nothing but the shame, shame, shame. Oh, but the times they are a changing.