With that in mind, we turn to the sponsors of this ‘meeting of death and torture’. As to be expected there are the peripheral companies that supply water filtration, frozen foods, etc. But then we come across much to our surprise Scubapro and Sherwood Scuba as Silver and Bronze Sponsors, respectively. Why would such respectable brands in the diving industry want to be seen promoting dolphin trainers and captivity? Looking further down the list we come to Coca-Cola, Haagen Dazs Ice Cream, and Blue Girl Beer. Some party going on here!

And there’s more. Lurking amongst them all is Parlevliet & Van der Plas B.V. the owners and operators of the super trawler Abel Tasman (formerly known as the Margiris), that has been the subject of a major controversy in Australia. This company rapes and pillages our oceans, sure they do supply frozen fish, but it seems this is more a case of greenwashing-being seen alongside respectable companies such as Coca Cola, Haagen Dazs, Blue Girl Beer, Scubapro, and Sherwood.

All this is being hosted by Ocean Park Hong Kong, a theme park who likes to announce that all their dolphins were captive born and bred. What they fail to state is that until 1994, 90% of their dolphins came from Taiji / Taiwan dolphin drives, so most of the dolphins in the park are actually descendants of Taiji dolphins. In fact, the only living animal in the USA from the Taiji drive hunt was transferred from Ocean Park Hong Kong some time ago. 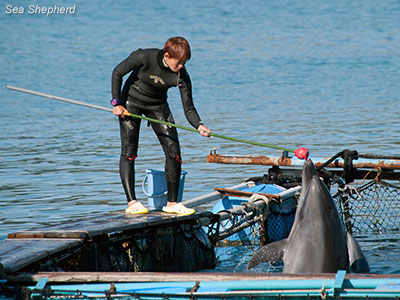 After the Scubapro/Sherwood sponsorship was exposed, many divers globally were obviously shocked and have likely written to Scubapro. This morning Scubapro made yet another very big mistake. They claimed that the statements on Facebook were ‘false allegations’ and that they should be ignored. Yet it was clear as the light of day that they were listed as Silver Sponsors on the conference website. They then proceeded to say that their logo was used without their knowledge or permission, which is strange as Grant Abel from the IMATA Conference said in an email that Scubapro provided all the information for them to post.

Then Scubapro made their biggest blunder yet, they actually stated that they provide support to Ocean Park, one of a very few carefully selected marine parks that provide awareness and education. Someone must have lost his or her job over this one! Do they not realize that most divers in the world, dive for the pleasure of exploration, nature, and the interaction with wild animals. If we wanted to see them in a concrete tank we wouldn’t need to buy all their expensive dive gear!

The slaughter continues again today. It is time for us all to stand up and be counted, time to make a stand against this mindless slaughter, and time for big corporations to get off the fence and make a solid statement. ARE YOU FOR CAPTIVITY OR AGAINST?

Scubapro-the long and short of it is, as divers we love your products, but we love our mammals free and in the ocean more. We can buy gear from others; we cannot get wild mammals from anywhere else.