Something Fishy Continues in Costa Rica and Germany

The case has gone from strange to absurd by the latest court decision. Their argument is that the case has to go to court before they are even willing to make a decision.

Let me get this clear: Captain Watson has to show up in Costa Rica to be placed in jail awaiting his trial to defend himself against a crime that does not even exist in Costa Rican law? What guarantee does he have that he will receive a fair trial if the basic principles of Costa Rican law are not even honored by their own courts? And how clear will it be that, even if we do win the case, an extradition to Japan is imminent. How much time away from his crucial work will it cost Captain Watson? I think we all agree he has more pressing matters to attend to. How much money do we have to spend to defend Captain Watson against these unlawful charges?

The case is being stalled and the courts are refusing to listen to our argument, even though it should be crystal clear to them. What is crystal clear to us, is that this has never been about justice, this has always been political, a way to shut us down, a way to keep us busy in the courts, a way to raise our legal expenses and therefore lower our campaign funds.

This tactic doesn’t really seem to work, quite the opposite actually. What has happened since Captain Watson’s arrest is growing worldwide support for our cause, the purchase of another vessel for our fleet (and how ironic is its origin), Captain Watson joining our fleet in time to lead the campaign, and just this Friday I received the news that Sea Shepherd officially has been inscribed as an NGO in Costa Rica.

It is more than clear that we have the support of people around the world, but at the same time it is clear that governments are not listening to their own people. Then again, what is new? 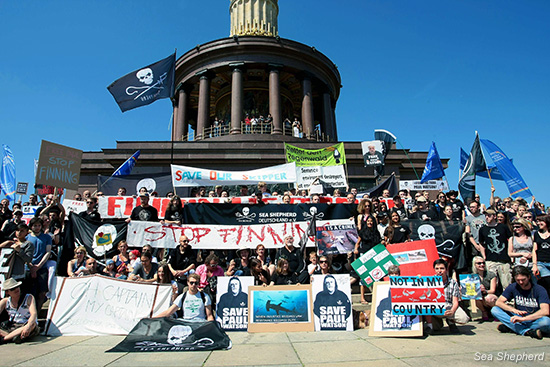 Supporters in Germany at an S.O.S day gathering in honor of Captain Watson
Photo: Sea Shepherd