Somber Recollections of the Pilot Whale Slaughter in Klaksvik

It was important for Sea Shepherd to get those photos out to the world, but since then, it has been even more important for us to prevent such a slaughter from ever happening again. So when the Brigitte Bardot pulled up into Klaksvik in July 2011, almost one year from the exact date of the grind I had witnessed, it was eerie but promising to see that the docks no longer ran red with blood.

We were unpopular in Klaksvik. Sea Shepherd has tainted the town with an international reputation as a heartless place and even many Faeroese viewed the infamous Klaksvik grind with disgust.

The blood orgy lasted for two hours. The capacity of the beach in Klaksvik was said to only hold 100 pilot whales. It is customary that once the beach is full, the local police authority orders the grind foreman to drive the rest of the pod out to sea, but here in Klaksvik, the killing continued. When the whales don't beach, the Faeroese whale killers wade out to sea and slam the soknargul, a cruel whaling hook, into the blowhole of the pilot whale. The soknargul, or grindakrok as it's called on the islands of Sandoy and Suduroy, is attached to a line that is then used to pull the frightened and panicked whale closer to the onshore butchers. 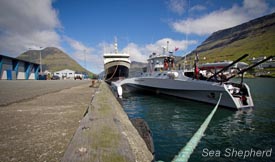 As the grind ground on in Klaksvik Harbor and the whalers struggled to find space for the pilot whales on their blood-drenched sands, many of the whalers quickly ran to their homes to grab tools that had been partly banned in 1986. Prior to 1986, the soknargul had a pointed end, the end now blunted to placate the Faeroese Veterinary Association. Back into the fray these killers went, their tools once frowned upon again creating panic among this pod of pilot whales that had swam together for generations.

After these two heartless hours, when the tide finally began to carry the blood and gore back out to sea, the pod, without a single surviving member, bore the signs of a whale hunt that was anything but quick, merciful, or sustainable.

The photos that I took in Klaksvik told a story. Each cut and blow that marked the carcasses lined up before me told a story. One pilot whale had been cut six times before her spinal cord was finally severed. When Faeroese locals tell me that the killing is quick, I think back to her.

Thankfully, the arrival of the Brigitte Bardot told a different story, one of an effective campaign designed to block and sever all attempts for a grind to occur. It is Sea Shepherd and Captain Paul Watson’s mission to ensure that another grind will never take place again, especially under our watch. As I walked the docks of Klaksvik once again, it was empowering to see that the docks were empty. There were no more dead pilot whales as far as my eye could see. I only saw the Brigitte Bardot resting on mooring lines draped across the quayside, as if she were cordoning off a crime scene implying that here, none shall pass.