Shepherding “The Cove” to an Oscar

In November 2003, two Sea Shepherd crewmembers Allison Lance of the USA and Alex Cornelissen of the Netherlands, were arrested after they dove into the “Cove” and cut the nets to release 15 captured dolphins and pilot whales.

In response to saving the lives of the animals, Allison and Alex spent the next three weeks in prison before being allowed to communicate with an attorney. They were released after four weeks, and both said that four weeks in a Japanese jail was a small price to pay for the lives of 15 dolphins and pilot whales.

The controversy started when the Drudge Report accused Sea Shepherd and Associated Press of doctoring the photos commenting that the blood red coloration of the water could not possibly be real.

“Don’t take our word for it,” I said. “If people don’t believe what we documented than go there yourself and see for yourself.”

But that was no longer possible. The fishermen of Taiji reacted to the Sea Shepherd 2003 expose with an aggressive response to close all access to the area where the dolphins were being slaughtered, despite the area being a national park.

Fortunately, one of the Sea Shepherd support crew there that first season was Ric O’Barry. I’ve known Ric since 1976 and I was glad to see that he arrived to assist. This one man has become a dolphin saving force of nature ever since he realized that his former job as a dolphin trainer was more akin to being a prison guard. Without any doubt Ric O’Barry, the original trainer of the most famous dolphin in history Flipper, is today, simply the most consistent, most experienced, most dedicated, most energetic, and most effective dolphin defender on the planet.

He and I hold the distinction of being the only two individuals banned from attending the annual meeting of the International Whaling Commission. Myself for Sea Shepherd’s sinking of half the Icelandic whaling fleet in 1986 and Ric for bringing the truth about Taiji to the IWC meeting in St. Kitts in a dramatic, in their face strategy that he has become quite famous for.

We saw that strategy at the Oscars when Ric held up a sign with his “text” number on it during the Oscar presentation. The Academy was not amused but Ric’s business was not to appease the Academy or anyone else in Hollywood. His business was to save dolphins and that text message immediately brought him 50,000 hits.  When it comes to understanding the power of the media, Ric O’Barry knows his stuff.

After the arrest of Allison Lance and Alex Cornelissen, it was made clear that Sea Shepherd was not welcome in Japan. The town of Taiji made it practically a crime to wear a Sea Shepherd shirt or hat. And of course Sea Shepherd crew would not be able to return without police harassment.

Fortunately where we were struck down and forced to drop the flag at Ground Zero, Ric bravely picked it up and became a one-man force to be reckoned with. And he played it very smart. With great patience he made sure not to break a single Japanese law. In the face of aggressive intimidation by Taiji fishermen, Ric maintained a cool and objective demeanor and he kept pushing, and pushing, and traveling the world, speaking and educating everyone he could find about the monstrously inhumane slaughter of intelligent and gentle dolphins by the Taiji fishermen.

One thing that Ric was forced to do in order to continue his efforts at Taiji was to remove his name from the Sea Shepherd Advisory Board and to deny any affiliation with Sea Shepherd. Had he not done this, he would have been unable to even get close to Taiji.

Ric’s continued return to Taiji in 2004, 2005, 2006, and 2007 kept the story alive until Louie Psihoyos found Ric. A combination of Ric O’Barry charisma, perseverance, experience, and courage, teamed up with National Geographic photographer Psihoyos, and financed with a war chest by Jim Clark, the skills of free divers Mandy-Rae Cruickshank and Kirk Krack, and adventurer Charles Hambleton, created the makings of a true mission impossible that evolved into “The Cove.”

Sea Shepherd worked with World-class free surfer Dave Rastovich and actors Hayden Panetierre and Isabel Lucas to oppose the dolphin killers at the Taiji cove featured in dramatic scenes from the film.

And the talking heads throughout the film included former Australian Environment Minister Ian Campbell, now on the Sea Shepherd Advisory Board, along with myself.

Although Sea Shepherd helped to lay the groundwork for this amazing film and participated in the making of the film the real credit for the incredible success of “The Cove” lies with the vision of Louie Psihoyos and the courageous determination and patience of Ric O’Barry.

We are now thrilled to hear that Ric and Louie and company will be joining us on Animal Planet with a new Animal Planet show to be called “Dolphin Warriors.”

We must however be aware that despite the astounding success of the film, the slaughter of dolphins at Taiji and other places continues. “The Cove” has delivered a heavy blow to the dolphin killers of Taiji, but they are still in the ring and the blood continues to flow into the waters of the cove at Taiji.

Winning the Academy Award for best documentary film virtually guarantees that the film will now be released more widely for Japanese audiences. The film will also continue to ignite outrage in people from around the world, and because of the Oscar, many more people will now see it than have already seen it.

The Sea Shepherd Conservation Society will continue our efforts on many levels to end the slaughter at Taiji. We will not rest until the insane brutality inflicted upon the dolphins at Taiji is ended once and for all.

The fishermen and politicians at Taiji who argue that the slaughter is justified on the grounds of culture and tradition should compare themselves to the slave owners of 19th Century America who defended their abhorrent practice on the grounds of tradition and culture.

It’s time for Taiji to realize that this is the 21st Century and cultures that practice barbaric rituals have no place in the kinder and gentler new world we must create if we are going to protect diversity and guarantee a healthy eco-system for our children and our children’s children.

The extermination of the dodo, the passenger pigeon, the Caribbean monk seal, and a thousand other species now extinct was almost always preceded by the human justification that it was part of the “culture.”

In today’s world however, the word “culture” has now replaced the words “manifest” or “divine” destiny.

The Japanese fishermen at Taiji do not have the manifest right to slaughter dolphins and the film “The Cove” points out that sometimes “culture” must be sacrificed for the greater good of the planet and humanity.

To watch “The Cove” trailer and other Sea Shepherd videos, click here. 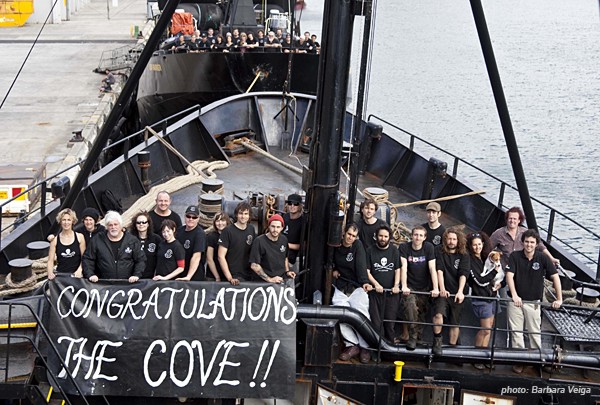