Canadian politicians having been making fools of themselves internationally ever since the European Parliament voted to ban seal products into Europe, a move that has crippled the Canadian sealing industry. Eating raw bleeding seal hearts, demanding that the Canadian Olympic team wear seal skin uniforms, carrying seal skin brief cases, wearing seal skin jackets, and now watching baby seals being killed for the perverse pleasure of watching the little pups being clubbed alive. It’s clear that the European Parliament has shook things up so badly in the Canadian House of Commons that quite a few screws and nuts have been loosened causing embarrassment to all Canadians whenever and wherever these Senators, MP’s, and bureaucrats open their mouths. 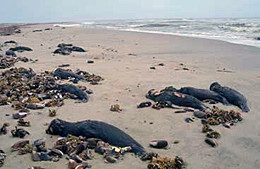 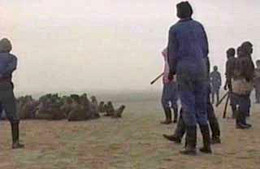 Canadian Senators, by the way, have plenty of time to go on taxpayer-funded junkets. Canadians do not elect their senators. These people are usually sycophantic political ass-kissers who get appointed for life as Senators in exchange for political favors delivered to the government in power at the time.

Co-Chair of the Canada-Africa Parliamentary Association, Senator Raynell Andreychuck, a Conservative, said that much of the condemnation over seal hunts is laced “with emotions rather than facts on the ground.” Animal rights activists and conservationists in Europe have criticized the governments of Namibia, Canada, Norway, and Greenland over the annual seal massacres.

What Audreychuck did not mention is that the European Commission has seen evidence from hundreds of hours of video footage of illegal killing and grossly cruel slaughter scenes. Their decision was based on solid fact and not emotion.

The Senators issued a media release saying, “We are one voice, we don’t believe that actions of the European Commission (EC) are justified. There is unity among the people, although a few minorities are against seal harvesting, but it’s a very few and an overwhelming majority supports our position.”

The Senators added that they would continue to engage the EC on why there is a need for seal killing.

The Association briefed journalists about its visit to Namibia, boasting about how thrilling it was to see the Namibian sealers at work.

Describing their interactions with their Namibian counterparts as fruitful, another co-chair of the Association, Senator Mauril Bélanger, highlighted the need for stronger inter-parliamentary relations, “We hope to strengthen bilateral parliamentary engagements at a continental level as well.”

The team said there is a great need for the parliaments of the two countries to conduct regular parliamentary exchanges with the aim of promoting the slaughter of seals between the two nations.

The delegation that visited Namibia consisted of four legislators from both the party in government, the opposition, and senior staffers of the Association. The group also met with opposition parties represented in the National Assembly.

The delegation returned to Canada on Friday, pleased with what they saw and heard in Namibia.

As a Canadian I am appalled at the actions of the Senators but not surprised. Canadian politicians have decided that Canadian patriotism and the Canadian identity is to be linked to the slaughter of seals. Like the bullfight in Spain, the former foxhunting in England, cock fighting in the Philippines, and bear baiting in Russia, Canada has decided that it needs an official blood sport and the baby seal slaughter is the ticket.

Oh Canada, the true North strong and free, where killing baby animals with clubs is the measure of loyalty to the blood stained Maple Leaf.

I stand as a proud dissident Canuck along with the majority of the Canadian people who oppose this atrocity in proclaiming that a real Canadian is motivated by compassion and NOT cruelty and that the perversions of some of these Canadian Parliamentarians are NOT shared by decent Canadians.