This from Associated Press: “Mercury high in Japanese town that hunts dolphins” (2010) 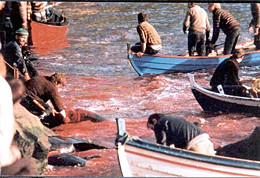 TAIJI, Japan: Residents of the dolphin-hunting village depicted in the Oscar documentary "The Cove" have dangerously high mercury levels, likely because of their fondness for dolphin and whale meat, a government lab said Sunday.

The levels of mercury detected in Taiji residents were above the national average, but follow-up tests have found no ill effects, according to the National Institute for Minamata Disease. The tests were done on hair samples from 1,137 volunteers of the town's roughly 3,500 residents.

"The results suggest there is a connection between hair mercury levels and eating cetaceans," Director Koji Okamoto told reporters at town hall.

Mercury accumulates up the food chain, so large predators such as dolphins, tuna and swordfish tend to have the highest levels. The latest studies published by the Japanese government show that meat from bottlenose dolphins had about 1,000 times the mercury content of that from sardines.

Fetuses and small children are particularly vulnerable to mercury, which affects the development of the nervous system. The Health Ministry recommends that pregnant women eat at most 2.8 ounces (80 grams) of bottlenose dolphin per two months. 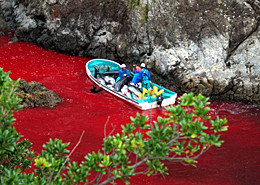 Environmentalists have long protested Taiji's dolphin slaughter and Japan's whaling activities, and have adopted the mercury issue as part of their cause.

Taiji had been considering adding a mercury test to its standard set of health checks for several years. The town government last year contacted the institute, which agreed to perform and pay for mercury tests as part of its research, according to Yoshio Kaino, a Taiji official who oversaw the program.

Various tests were done from June of last year through February. On Sunday, a town hall meeting was held to explain the results, and about 100 Taiji residents who attended were told that there was no need for most of them to change their diet, although future tests are necessary.

Individuals with the highest levels were advised to cut back on large fish and sea mammals. Although it can damage the nervous system permanently, mercury naturally fades from the body over time, halving about every 70 days. A person could flush most of it from their system by completely cutting it out for a year.

At lunch after the town hall meeting, council chief Katsutoshi Mihara rejoiced as he carefully dipped raw slices of a striped dolphin into soy sauce.

"This may seem nonchalant, but I have absolutely no concerns, and I want to be able keep my lifestyle," he said.

As served at "Moby Dick," a hotel run by the local government, the red and pink dolphin sashimi was chewy and faintly fishy, its mammalian consistency more like meat than fish.

Despite the high mercury levels found in the Taiji tests, institute officials said neurological tests on the 182 citizens who wanted them found no problems. Follow-up tests are planned by March of next year, with outside experts possibly invited, and a separate study is under way to track mercury levels in the local catch.

At a presentation for the press on Sunday afternoon, many reporters questioned how there could be no health effects despite such high mercury levels, with some challenging the competency of the lab.

Joanna Tempowski, a scientist who works on chemical safety at the World Health Organization in Switzerland, said the Minamata institute was a respected institution that was trusted to provide technical assistance.
Without seeing the Taiji results, she said that some damage from mercury might not appear immediately.

"At some point in the future they might start to show health effects," she said.

Mercury poisoning is a sensitive topic in Japan, where a disorder now called Minamata Disease was linked to a chemical company that dumped tons of mercury compounds on the southern island of Kyushu.

The disease causes spasms, sensory loss and birth defects and can be fatal.

The pollution continued for years after it was discovered, and Minamata disease became an international symbol of environmental damage and corporate corruption.

What struck me were two statements in the above story:

"This may seem nonchalant, but I have absolutely no concerns, and I want to be able keep my lifestyle."

"At some point in the future they might start to show health effects."

And we saw what those effects are in Minamata, Japan with genetic defects, mental retardation, and brain tissue degeneration.

But hey, Mihara does not want anything to get in the way of his “lifestyle.”

If this is not an indictment on the insanity of culture within human society, I don’t know what is.

Self-destructiveness within the psychology of human beings is of course prevalent. We see it all the time, smokers, excessive drinking, drug abuse, unhealthy eating habits etc.

The same mentality held by smokers could be used to explain the suicidal behavior of dolphin and whale eaters.

But, what strikes me in all of the debate over mercury is the effect it is having on two innocent parties. 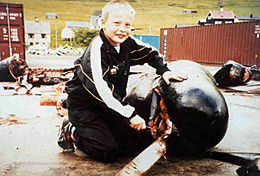 The first are the children who are literally force-fed mercury contaminated meat in school lunch programs or by their parents. The second group is not even mentioned: Just what the hell is all that mercury doing to the dolphins and the whales?

With children, I once told Faeroes Prime Minister Atli Dam that forcing their children to eat pilot whale flesh was forcing them to eat poison, and thus was child abuse.

The Prime Minister responded by saying, “What we do with our children is our business, it is none of your business.”

To which I answered, “Child abuse, I believe, is everyone’s business.”

He then went on to mumble something about the “grind” (pilot whale drive hunt) being a gift from God and a part of their culture, and for us to mind our own business and well, you eat cows and chickens, so there!

But some people would just prefer to kill their kids to preserve their culture. The consequences are there and can plainly be seen, but people have a tendency to deal with any disease by attempting to treat it rather than attempting to prevent it.

Anyhow, there are plenty of organizations valiantly working on the frustrating task of trying to prevent people in places like Taiji and the Faeroes from killing their kids.

Very few are working on trying to stop these cultures from destroying the health and the lives of dolphins and whales.

That is where the Sea Shepherd Conservation Society comes in. Our clients are not people but those species of mammals, birds, fish, reptiles, and invertebrates that inhabit our oceans.

These species do not have a choice. We pump mercury and other industrial chemicals into oceanic habitats continuously, and marine species have no choice but to swim through this filth and to ingest it, to pass it through their gills, digestive systems, and pores.

Little thought is given to these nonhuman victims and very little research is being done on the impact of mercury and other chemicals on nonhuman species, and thus we continue to poison the sea.

Poison may work quickly or it may work slowly, but the consequences are usually predictable: debilitation, permanent damage, motor impairment, genetic defects, mutations, and death.

From the New Scientist – Mercury poisoning in the Faeroes (2008)

In a statement to the islanders, chief medical officers Pál Weihe and Høgni Debes Joensen announced that pilot whale meat and blubber contains too much mercury, PCBs and DDT derivatives to be safe for human consumption.

"It is with great sadness that this recommendation is provided," they said. "The pilot whale has kept many Faeroese alive through the centuries."

But in "a bitter irony", they said, research on the impact of the pollutants on the Faeroese themselves has shown that mercury, especially, causes lasting damage.

The medical officers note that it wasn't the Faeroese who created the pollution. But "these results have already led to tightened restrictions on pollution worldwide. We must therefore also ourselves acknowledge the consequences."

Our oceans are living habitats that depend upon bio-diversity and the interdependence of species with each other.

The risk is clear: poison life in the oceans and bio-diversity is diminished, and when species are extirpated or driven to extinction, interdependence is also diminished. In short, we are killing our oceans.

And when the oceans die, we die!

This is the way the world ends!
Not with a bang but with a whimper.
- T.S. Elliott