To the People of the Faeroe Islands,

It’s been over a week since I was in Klaksvik and I’ve since then read that another grind took place in Torshavn. I’m not surprised because I know that change takes time. I never expected the grind to end overnight because I took some photos. But I still feel optimistic because if I look at history I know that one day the killing will stop.

Whaling helped build the country of Australia. The shores of the island of Tasmania are littered with old whaling stations. A single whaling station in Queensland on the northeast coast of the country took 6,277 humpback whales in a single decade in the mid-20th century. In the 1950s and 60s, one whaling company in Western Australia was taking an average of 1,000 sperm and humpback whales a year.

But on November 20, 1978, the last whale was harpooned in Australia. A growing lobby of Australian environmentalists, led in part by the daughter of then prime minister Malcolm Fraser, convinced Fraser to stop whaling forever and do what he “already knew was right.” Just thirty years later, Australia is the most vocal opponent of whaling in the International Whaling Commission and has just recently announced its intentions of taking Japanese whaling in the Antarctic to the International Court of Justice in The Hague for their illegal whaling activities. Traditions change because sometimes a change in human consciousness demands it.

Seeing the aftermath of the grind in Klaksvik was not my first close contact with beached pilot whales. Over a year ago, I was part of a rescue effort in Australia where 174 pilot whales had stranded on an isolated island. Of the 54 pilot whales that were stranded alive, 53 were reintroduced to the sea by Sea Shepherd volunteers, island residents and wildlife personnel from a coalition of government agencies. The weather took a turn for the worse and delayed our efforts to rescue the last remaining cetacean. For almost three days, we sat by her side, covering her in wet cloths to protect her from the beating sun. We poured buckets of water over her while monitoring her breathing.

When the wind died down, we put a harness around her and towed her out to sea between two jetskis. One hundred meters beyond the coast she began pulling away from the tow and by helicopter we could see that she was going straight for her pod. They had waited three days for her, just half a mile beyond the coast. Since then, I've never doubted the complexity of their social groups and I sometimes think that cetaceans are more capable of showing empathy and compassion than us humans.

It amazed me that to save the life of one whale, the Australian Government and the Australian public was willing to invest a team of 10 wildlife experts and scientists to save one whale when 30 years earlier, whales had more value dead than alive. It was this story that I was thinking about when I received an anonymous e-mail from a Faeroese national. This person told me that almost at the same time that I was in Australia, an orca had stranded in the harbor of Klaksvik. Local residents ran down to the shoreline, but they left their grindaknivar and soknaronguls at home this time. A tremendous effort was made to reintroduce the orca to sea and if it weren’t for her deteriorating health, she would have survived. I have reason to feel confident that the grind will one day end.

Culture and tradition are important, but as Mahatma Gandhi once said, “the greatness of a nation and its moral progress can be judged by the ways its animals are treated.” The pilot whale helped the Faeroese people survive for centuries, but now, when the Faeroe Islands have one of the highest standards of living in the world, the grind is no longer needed for subsistence. Like Australia, the Faeroe Islands are in a position to choose whale-watching over whale-hunting, to choose compassion over killing. Sometimes we do the things that we do with little reflection because we’re creatures of habit. I honestly believe that the Faeroese people will one day choose to stop the grind, not because I think that you should, but because it is the “right thing to do”—not just because of the cruelty involved in the slaughter, or the effect on the environment but also because of the heavy metal contaminants found in the meat.

As a seafarer and a conservationist I’ve been to all seven continents and have lost count of how many countries that I have visited and I have to say that I've never been to a more beautiful place than the Faeroe Islands. So it hurts me that I can’t mention one of the best kept secrets of tourism, without mentioning that every summer the waters around these beautiful islands turn blood red. I long for the day when the Faeroe Islands are not known for the cruel grind, but for the haunting songs of Annika Hoydal, the beautiful poetry of Roi Patursson, the dramatic gorges and fjords at places like Gjogv and the warmness of the Faeroese people. 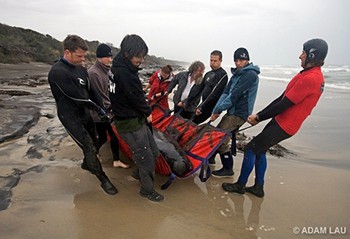