One of my most favourite people is heading to Santiago, Chile on June 18th to attend the International Whaling Commission Meeting.

Her name is Skye Bortoli. She is 15 years old and she is the founder of Teens Against Whaling at: www.teensagainstwhaling.com

Ever since I met her in November 2006 in Byron Bay, Australia, Skye has been passionate about protecting whales. In June of 2007, she traveled with her mother, her sister and her friend to Anchorage, Alaska to present her case before the meeting of the International Whaling Commission.

I remember the IWC meetings of the late Seventies and early Eighties when Greenpeace brought a passion to the IWC meetings that inspired great changes. That passion was lost for some time as Greenpeace became more bureaucratic and of course the Sea Shepherd Conservation Society has been banned from the IWC since 1987 as punishment for enforcing the IWC moratorium against the Icelandic whaling fleet.

So it was exciting to see Skye and her little group liven up the dour atmosphere of the meeting at the Captain Cook Hotel. They were the only observers who did not shy away when I was ordered to leave the building and the only ones to question why the most aggressive whale defense organization in the world was barred from entry to the IWC.

Skye went around interviewing everyone and she has become quite an expert on the strengths and weaknesses (mainly weaknesses) of the IWC.

In February 2008 she traveled with the Daily Telegraph from Australia to Japan to present 131,965 signatures on a petition to end whaling to the government.

Skye is returning this year to the IWC meeting in Santiago and this time she is bringing artwork from children all over the world to represent the children's desire to protect the great whales.

People can contact Skye to support her at: bortoli@mysoul.com.au. 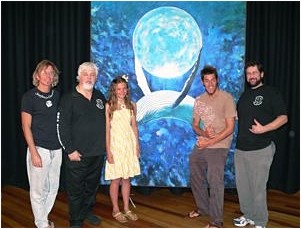