Sea Shepherd Stands By Our Position: Mike Meyer Must Be Fired

What we have here is a vicious whale killer claiming he is a victim of “vicious abuse” by myself because I am demanding his dismissal for his incompetence and radical butchery on the beach at Kommetjie outside of Cape Town. He has even threatened me with a lawsuit for slander and my response to that is that he is welcome to bring it on because the one key defense against slander allegations is simply the truth and we have the videos and the photographs of the smoking guns as they blast apart the brains of defenseless false killer whales.

In Australia recently, 130 of 140 stranded whales were rescued and returned to the sea by volunteers including many of my own Sea Shepherd crew. The Australians were able to do what the South African bureaucrats would not even try to do.

Instead of aiding the whales, they unleashed Mike Meyer, a cold blooded and vicious killer. He must be removed from the position that he is in, a position that he has abused many times, this latest incident being one of his most blatant transgressions to date.

MCM states that Mike Meyer has more than 30 years of experience working with marine mammals. What kind of experience is not described, but for the most part it was not the kind of experience that was a benefit to marine mammals. My own experience goes back further than Mr. Meyer and never in my life have I seen cause to order the execution of a whale and certainly not an entire helpless pod of whales that could have been returned to the sea. If Meyer is the best that South Africa has to offer than South Africa and MCM can be considered a disgrace in the field of marine conservation.

MCM states that Meyer consulted with scientists and veterinarians, yet has not identified a single scientist or vet they allege was consulted.

I especially like the statement that “Mr. Meyer carried out his responsibility in administering the shots to put the animals out of their misery.”

The shots were delivered with an assault rifle and many of the animals were still in the water and could have been returned to the sea.

Mike Meyer and his thugs physically prevented dedicated willing and ready volunteers from assisting the animals with threats of violence and imprisonment.

When MCM states they had no alternative, they are being misleading. The animals were close to Cape Town. There were sufficient volunteers to attempt the rescues. Some of the animals were in fact returned to the sea before Meyer arrived.

And of course the one glaring omission by MCM is that earlier in the day, military exercises took place at sea that may have been a contributing factor to the beaching of these whales.

MCM in their press release states, “The question can also be asked – is it not unethical just to allow animals to suffer for many hours and die on a beach if you have the means to end their misery?”

This is an attempt to actually make those who would save the animals into the villains. A gun is always the easiest and most efficient means to terminate life, especially if you’re too damn lazy or incompetent to save those lives.

But were the animals suffering? They may have been uncomfortable but we don’t go around shooting cancer patients, accident victims or the terminally ill because they are suffering. We do everything we can to save their lives.

In this situation, the government bureaucrats did not even come close to doing everything they could to save these animals. Meyer chose extermination as the easiest course of action.

Sea Shepherd South African director Herbert Henrich has responded to this scandal with the following observations sent to MCM:

I refer to your Media Statement of the 4th if this month.

- What rescue systems and what rescue protocols are available within the MCM?

- What training did Mike Meyer undergo to qualify to be judge and executioner?

- What records are available and for the public to see from SPCA or a qualified veterinary? (Obviously neither Police nor Navy nor other Law Enforcement Agencies are trained to deal with beached whales and hence cannot qualify in this respect.)

- What do you mean by being ' kept in the loop '. What did this 'loop' provide in terms of advice and assistance?

- Does a medal from Derek Krige turn your staff into scientists? If so, who needs Universities?

- Is it not correct to say that Mike Meyer, MCM, and the daisy chain of other names you throw at us have no clue how to deal with stranded whales?

- Do you know of the most recent whale beaching in Australia of 140 animals in 4 pods that were rescued simultaneously by volunteers and trained officials with the loss of ONE animal life? Why? Australia has facilities and protocols easily available to you people here.

I have known Mike Meyers and his approach to problems with seals and whales for the past 8 years and I cannot recall one single instance in which he showed any compassion or care for the creatures in distress. The gun or other forms of destroying the animal was always the easiest and ultimate solution.

So, please, spare us the spin and accept the fact that MCM absolutely falls short of internationally accepted standards in this and many other respects. MCM needs to be revamped or better yet replaced. The call to dismiss Mike Meyers does not come only from Sea Shepherd but from many, many people who saw creatures destroyed without even an indication of help or support from the organization that is tasked to protect our marine life.

Finally, should DEAT be interested in developing protocols and rescue equipment, do let us know and if you can present us with qualified and dedicated people, we can give at least some advice what to have at hand when emergencies like this arise.

Of course MCM has their ass kissing groups eager to lend legitimacy to the slaughter.

Sea Shepherd has been slammed by Allan Perrins, head of the Cape Town SPCA, as "unfair, insensitive, inflammatory and defamatory". It was also factually inaccurate.

"Their maverick strategies and emotive outbursts serve no good purpose. We stand by the gut-wrenching decision taken by Mike (Meyer) which was made only after exhaustive efforts had been undertaken to save the whales. People should dismiss this outrageous statement with the contempt it deserves," Perrins said.

Perrins does not explain how we were incorrect and dismisses our call for Meyer’s dismissal as “emotive.” My question to Perrins is just what is wrong with emotionally responding to the horrific massacre of these whales? We are not cold-hearted killers or apologists for such killers and we make no apologies for demonstrating our feelings of repugnance and horror at what Meyer did to these gentle animals.

Amazing Nan, just what is it about the words “Dolphin Action and Protection” that you don’t seem to understand? Nan Rice has a long record of favoring lethal solutions over mercy and assistance to the animals.

What Meyer did is the ecological equivalent of the infamous Sharpsville Massacre. That horror against South African non-white citizens laid the foundation of the overthrow of apartheid. What we need to do is lay down the foundation for the re-organization of the Marine Coastal Management department.

We do not intend to drop this campaign until Meyer is removed and MCM adapts a solid and intelligent plan to assist stranded and wounded marine mammals.

Please write to the following to express your concerns: 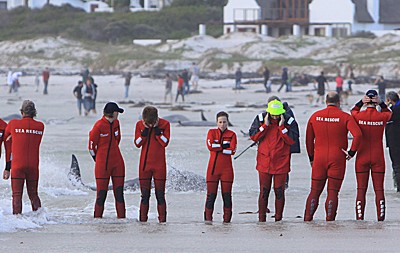 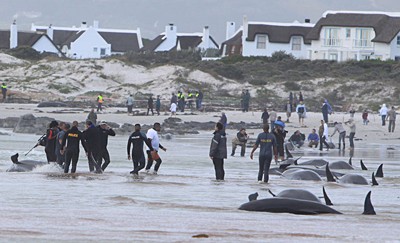 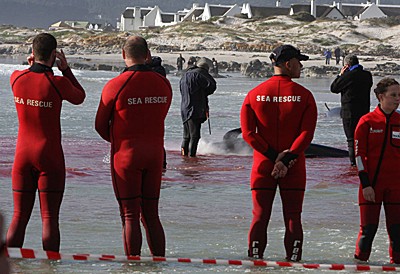