The procession from the parliament building to the cathedral led by members of government, clergy, and leading civil servants, proudly dressed in traditional Norse garb, provided us a momentous opportunity to expose the cruel and horrific tradition to the local Faroese community as well as the many tourists who visit the isolated island chain each year. While the feedback about the slaughter from international visitors was that of utter shock, disbelief, and outrage, the majority of locals proceeded to frolic and play with lack of any display of emotion. Several local families even stopped to have their children photographed in front of the volatile images of desecrated whale carcasses. Evidently there is very little, if any, parallel made between the social complexity, including extremely strong family bonds, shared between pilot whales and that of the human family here in the Faroe Islands. Eventually, the local mayor passed by our public display and large group of bystanders, including members from the local press and Animal Planet’s film crew, and immediately phoned the chief of police, who forced us to vacate the premises. For people who boast such supposed cultural pride surrounding the annual bloodbath, it appears that media exposure still proves to be one of the strongest threats here and thus our continued weapon of choice. 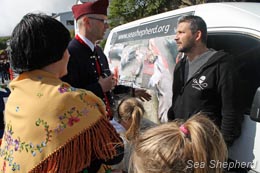 Crewmember Stephane educates locals about the grind. Photo: Deborah BassettA few days prior, Stephane drove the ‘Stop the Grind’ van from Paris to Copenhagen and then proceeded via local ferry to the Faroes, where he was greeted upon arrival by customs agents who confiscated seven of eight acoustic devices. Most likely tipped off by local informants, Stephane was able to slip one of the acoustic devices into his personal belongings, which the ships have since successfully deployed to deter the pilot whales from entering into local bays where they would meet certain and brutal death.

In the early hours before the festivities began, Stephane covertly applied the adhesive images to the van in a hidden location and we swiftly embarked upon the risky mission. We were prepared for potentially violent reactions as the majority of the Faroese people we have met over recent weeks here avidly support the cetacean genocide and have made no qualms about letting us know that Sea Shepherd is not welcome in these parts. However, aside from the occasional dirty look or angry remark, there was little confrontation. We successfully ‘rained on their parade’ which served as a symbolic gesture of our solidarity with the pilot whales. We spent the remainder of the day conversing with locals and tourists to raise public awareness on the issues and show our direct opposition to this shameful and senseless atrocity.

Our land crew operation for Operation Ferocious Isles, led by Sea Shepherd France President Lamya Essemlali, remains active on the ground, continuously patrolling the hunting bays and working in conjunction with the crews onboard the Steve Irwin and Brigitte Bardot. According to Essemlali, "Since we are dealing with a unique geographic landscape here in the Faroe Islands, it is critical to have eyes and ears on the ground during this campaign. This is an all-hands-on-deck effort and the ground crew has been working diligently to provide up to the minute intelligence to the ships. If a pod of pilot whales does enters these waters, we will be there before the whalers in order to protect our defenseless cetacean clients."