Sea Shepherd Sails into a Star-studded Controversy at Cannes

The film screened to a full house, with distributors showing their interest for the foreign markets, all exceptionally good stuff I might add. Peter Brown has been associated with Sea Shepherd since 1982 and this film is testament to the time, love, and effort he put into the project. It is presented in a way that only Peter could make it – with humor and a touch of sarcasm.

We were also there to promote Brazilian Sea Shepherd crewmember Barbara Veiga’s photo exhibit at two different galleries in Cannes. Barbara was our official photographer for the last two Antarctic Whale Defense campaigns, as well as last year’s Blue Rage campaign off the coast of Libya. She is an exceptional photographer and a true artist and we were all very proud to attend her exhibit and to promote it as best we could. 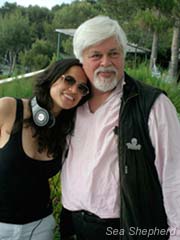 Photo: Deborah Bassett I was amazed at just how many people were aware of Sea Shepherd and Whale Wars. I was stopped continuously on the street for autographs and photo requests. Even Julian Lennon came up and said he was a fan.

Michelle Rodriguez hosted a fundraising lunch for us with the enthusiasm only she can bring to an event. She was also twirling the discs at the party for the courageous film, The Big Fix. This film takes on the daunting task of exposing the crimes of BP in the Gulf of Mexico.

In addition to The Big Fix party, we were also invited to the party hosted by the People’s Republic of China, which of course presented the most awesome fireworks display I’ve ever seen, and I’ve seen plenty of them.

The highlight for me was an invitation to see Takashi Miike’s film Ichimei Hara-Kiri: Death of a Samurai. The film is based on Takiguchi Yasuhiko’s novel Ibun Ronin-ki, and is a remake of the 1962 film Seppuku by Masaki Kobayashi. This was a red carpet affair and I was very honored to be able to escort Charli Morgan from The Cult PR of London onto the red carpet. The Japanese photographers certainly took notice of me, but all of the photographers took notice of Charli.

We did interviews with Radio Monaco, and Sea Shepherd was featured in the Nice Matin newspaper, in addition to numerous other interviews from media around the world. 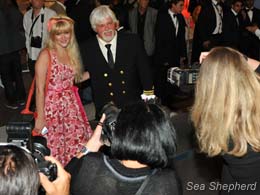 We actually had our ship in an excellent position to appear on camera as press was interviewing the stars from the Palais du Film but were forced to move when Paul Allen’s big yacht the Octopus arrived. Oh well, we snagged those cameras for two days anyhow.

All in all it was a great event and a good opportunity to promote Sea Shepherd, and the best part of it was that it did not take us out of our way because we are in Southern France preparing for our campaign to intercept bluefin tuna poachers in Libyan waters.

After Cannes, the Steve Irwin moved westward along the coast to La Ciotat to see the Gojira returned to the water from drydock after a complete overhaul transferring Godzilla into a far more beautiful entity. From monster to beauty…the name change will officially take place tomorrow.

Stand by for the official announcement tomorrow as the Gojira name is retired and our fast interceptor scout vessel takes on a new name, as well as a new look.