The look of the surface of the ocean changes from day to day, in part because of winds and currents moving the oil and emulsion around, but also in part because we humans continue to spray a dispersant known as Corexit in massive amounts from large C-130s and other planes, in attempts to break up the oil and make it separate into small particles and sink beneath the surface… 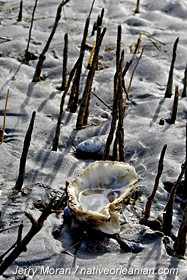 Why do we do this? Sadly the answer is because less of the oil will make it to shore, because photos from the air will not look so egregious and horrifying, so that maybe tourism and BP's reputation can be salvaged. So that fishermen can still go out and try to bring in shrimp? One might not believe the last, and yet we have seen trawlers out there almost every day, not trawling but still pulling their nets! Sure, some of those boats are now pulling skimmers, trying to salvage some of the fresh oil from the surface. But some of them are still fishing, unbelievably. As the dispersant works, and the small bubbles of oil sink, all life beneath the surface becomes coated with it. They ingest it. Their eyes and ears and gills fill with it. They suffocate, they are poisoned, and they die slow and horrible deaths.

We have seen less and less ocean wildlife over the past two months. What we do see is now much closer to shore than it was previously, typically within 50 miles of the coast, and crowded into the shallow waters on the coastal sides of the off-shore islands. Within 30 miles of the coast off Caillou Bay (west of Grand Isle), and within 5 miles of the oil-scarred shores of the Chandeleur Islands, we have seen many schools of cownose rays (Rhinoptera bonasus), golden-colored and swimming very close to the surface, 20-40 in a square-shaped school. Often these rays are followed by sharks. We’ve seen small pods of dolphins, almost always swimming very fast, almost frantically in circles, and often within a few hundred meters of thick patches of brown crude oil emulsion. If we had been seeing this in beautiful clear blue water, we might have thought this was enthusiastic play, but in this toxic pool, we wondered if this isn’t a sign of serious stress.

Having flown over the “water” for hundreds of miles, we know that there is no clear passage for those animals to swim out of the oiled areas and out to cleaner open water, unless they first go several hundred miles along the coasts east or west and then out to open water. Do they know to do that, we have wondered? Perhaps the animals who are still here do not, and we wonder, what will become of them? As hurricane season arrives and blows oil all over the off-shore islands, the thousands of nests with hatchlings—pelicans, egrets, herons, and more—they seem doomed. 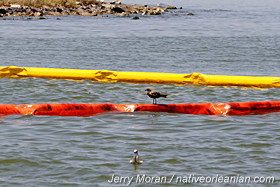 In the coming weeks, we’ll be bringing more boats, more fully hazWOPER-trained crew who are experienced and trained in the recognition of oiled wildlife and coastal ecosystems. Wildlife rescue activities are tightly controlled in the US Gulf waters. At this time, even the International Bird Rescue and Research Center (IBRRC), people who clean and rehab most of the captured oiled seabirds, are no longer permitted to capture and bring to shore oiled birds; that authority is reserved for the US Fish and Wildlife Service (FWS) and Louisiana Department of Wildlife and Fisheries (LDWF).

Less parochial, it seems, are the sea turtle rescue efforts. Several non-government groups in the New Orleans and Alabama areas have been very active and effective in the rescue and rehab of oiled turtles. We have flown and boated and worked and discussed at length with sea turtle experts, and Sea Shepherd will be coordinating tightly with sea turtle rescue activities throughout the Gulf, including proactive efforts farther south, near Rancho Nuevo, Mexico, where so many sea turtles live and begin their lives. We will work with the many indigenous peoples of Mexico whose lives and cultures are tightly bound to sea turtles and what they represent.

You’ll hear more about the ships and experts that Sea Shepherd will be supporting in the Gulf in the coming months. For now, we’ll continue to bring you objective, clear documentation of what conditions there really are, and we’ll continue building strong ties with groups, scientists, and local people who can help us make a big impact toward protecting and preserving as much of the Gulf wildlife and ecosystems as can be saved.