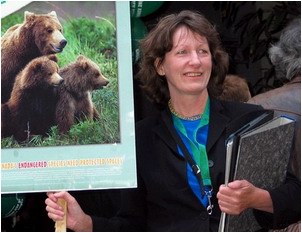 Her death came as a shock as she was diagnosed with brain cancer only two weeks ago. She was 57.

I knew Colleen for more than three decades. I was with her in Rio de Janeiro when she scolded British Columbian Environment Minister John Cashore for selling out the forests. I attended numerous meetings, rallies, and events with her over the years. She was one of the most dynamic and active environmentalists in Canada.

And she was courageous. She defended the wilderness in a small town where rednecks routinely harassed her, boycotting her clothing store and throwing rocks through her windows. She stood up to them all - loggers, miners, politicians, media critics, and corporate public relations firms.

Eco-Judas Patrick Moore called her the "bitch from the Slocan who gave British Columbia a bad name," citing her famous description of B.C. as "Brazil North." Being called names by Moore, the corporate whore, indicates that she was doing her job of protecting the wilderness very well.

Colleen McCrory died in New Denver, the West Kootenay town where she was born and raised. This is also where she founded and ran the Valhalla Wilderness Society for more than three decades.

The Valhalla Wilderness Society was small, but achieved great influence because of Colleen's passionate activism. The phrase "Brazil of the North" became a familiar one in B.C. because of the way she repeatedly used it to describe logging practices in the province.

She founded the Valhalla Wilderness Society in 1975 to protect the forests along Slocan Lake near New Denver, a small mining and lumber town in the West Kootenays in south-central B.C.

She was coordinator of the B.C. Environmental Network from 1989 to 1990, working on issues ranging from forestry to mining in provincial parks. In 1991, McCrory founded Canada's Future Forest Alliance, a network of activists determined to save the country's forests.

McCrory ran for the Green Party in the 2001 provincial election, finishing third in the riding of Nelson-Creston.

Colleen was a longtime supporter of Sea Shepherd and a good friend. I will miss her. Another one of Canada's legendary eco-warriors has fallen and the world is a lesser place without her.