Make no mistake. Sea Shepherd wishes to express its heartfelt condolences to the victims’ families. But while these six tragic deaths evoke society’s primal fears, fueled by media hype, we, as a globally impacted community, need perspective.

In the last 215 years in Australia, only 18 shark-related fatalities have occurred — an average of one death every 12 years. In the US, where one is five times more likely to be bitten, the odds of drowning are 1 in 3.5 million. Someone’s odds of dying from a shark bite are less than 1 in 264 million. And, in 2008, in Australia, one person died from a shark bite, 315 died from drowning and 694 died in car accidents.

“Before killing sharks, the Australian government must also consider their status,” says Sea Shepherd’s Director of Shark Campaigns, Julie Andersen. “The Australian government is exhibiting incredible ignorance. Sharks are in danger of extinction; up to 73 million are killed each year. Regionally, more than 90% of shark populations – including whites – have been utterly decimated. White sharks are protected nationally and internationally and the U.S. is even considering adding them to its Endangered Species Act. Given the critical nature of their status, Australia is lucky to even have sharks in its waters,” she says.

Andersen adds:  “The world cannot afford to lose anymore sharks. Like them or not, we need sharks on this planet. As apex predators, they keep our oceans’ healthy. Sharks are a critical component in an ecosystem that controls our planet’s temperature and weather, provides one-third of the world with food, and generates more oxygen than all the rainforests combined. Recent studies indicate that regional elimination of sharks has caused disastrous effects including the collapse of fisheries and the death of coral reefs. Kill the sharks and Australia’s healthy, beautiful coastline will join countless other ocean dead zones,” she states.

Continues Andersen: “Not only is culling absolutely ridiculous, the practice reinforces our society’s misguided and irrational fears of sharks. This in turn fuels one of the biggest issues faced in shark conservation: the public’s apathy or even loathing towards sharks. The media-created and culling-reinforced image of sharks makes it difficult for many people to understand why sharks are worth saving – let alone take measures to do so.”

Andersen states alternatives exist to the archaic practice of killing sharks with nets and drum lines, many of which have been implemented successfully in other regions.  Other methods of harmless deterrents such as electrical current, alloys, and chemicals are also being developed. States Andersen, “If we can put a man on the moon, we certainly can determine a method to ensure sharks and humans can peacefully coexist in the shark’s domain. Programs like the Shark Spotters in South Africa prove there are viable alternatives to shark nets and also that education and awareness can help.”

The issue of shark culling is not new to Sea Shepherd, who has been fighting to bring an end to shark nets and other culling programs for decades. Our “remove the nets” (www.removethenets.com) campaign has been placing pressure on the government of South Africa for more than four years, rallying the support of thousands. Sea Shepherd also recently sued the government of Reunion in France and won — successfully ending the illegal shark cull called for in August in the Marine Reserve.

In recent years, shark fishing has skyrocketed — eliminating a large percentage of shark populations — and the public has been exposed to much information about the environment and biodiversity conservation as well as sharks’ true behaviors towards humans. And many have gone far in proving there are other harmless shark deterrents. The need for shark conservation is an established fact, as is the fact these animals are significantly misunderstood with the actual risk of a dangerous encounter being infinitesimal.

The days of killing animals out of fear are over. Australia  — a country whose environmental policies, fueled by booming eco-tourism — should be setting precedence for the world. At a time when we are racing through our natural resources at unsustainable rates, destroying wild animals simply because we can or due to irrational fears fueled by a lack of knowledge is no longer acceptable.

"Western Australian Premier Colin Barnett has displayed openly that his responsibility as a leader to protect the essence of the very ancient and sacred state that he governs is rarely considered. In the height of the fight to protect James Price Point comes the ridiculous idea to cull the beautiful and important Great White Shark from Western Australian waters, demonstrating yet again that Australians need to wake up and acknowledge who we are letting make these kinds of decisions. This is not  “Jaws” where everyone needs to run and hide in fear. This is the rugged and beautiful coast of Western Australia, and the fear that people are displaying is embarrassing! If only we could make a split decision to do the same kind of culling in government,” says longtime Sea Shepherd supporter, musician Xavier Rudd. Xavier is also a surfer who is not afraid to share the water with sharks.

So rather than thinking “these are just fish,” let’s keep this in perspective: Without sharks, the oceans die. And as our founder and president Captain Paul Watson says, “If the oceans die, we die.” Sea Shepherd will not stand by quietly and allow the Australian government to destroy some of the oceans’ last remaining sharks in ignorance and arrogance. We forced the issue to become addressed in South Africa and we’ve stopped the shark cull in the La Reunion Marine Reserve. We’ll do the same in Western Australia. 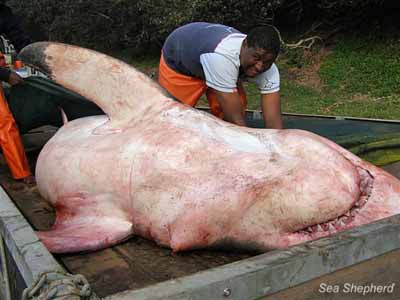 White shark killed in South Africa on drumline, like those being proposed.
Photo: Sea Shepherd