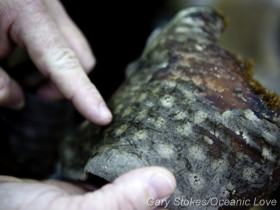 Ironically, this tragedy occurred within days of the city of Manila hosting representatives from some fifty countries for the third meeting of the International Cooperation on Migratory Sharks, during which a Memorandum of Understanding (MOU) was signed that would extend special protections to whale sharks. In addition, the Philippines are a party to the Convention on International Trade in Endangered Species of Wild Fauna and Flora (CITES), and whale sharks are one of only three protected species of large sharks under CITES.

This new MOU has clearly not had the desired impact, as just two months ago, again in the Philippines, an even more egregious slaughter took place. October news reports tell of an angry fisherman who shot a baby whale shark to death after it had become entangled in his fish pen. Police reports indicated that over thirty bullet wounds and multiple spear wounds were found in the baby shark’s body, which was allegedly cut up and divided among the villagers, and one may be certain that its fins were sold for a hefty sum.

Although investigations are underway in both of the above cases, and the murderers, if proven guilty, may face up to four years in prison plus a nominal fine, it is unlikely that justice will ever be served for these poor animals.

Setting aside the illegality of these appalling acts, what makes the senseless murder of a whale shark even more unforgivable is the whale sharks’ truly gentle nature. Whale sharks are filter feeders; they swim slowly at the surface filtering plankton through their enormous gill rakers. They are renowned worldwide for their non-aggressive demeanor; in fact, there is no known record of anyone ever having been deliberately harmed by a whale shark. Sadly, whale sharks are also the slowest swimmers of any shark, and due to their large size and close proximity to the surface while feeding, they are easy targets for opportunistic fishermen who wish to profit off of their beautiful fins.

Basking Sharks -- Another gentle filter feeding species, the basking shark, was nearly hunted to oblivion in an onslaught sanctioned by the Canadian government back in the 1940s and 50s. Although minding their own business, basking sharks gained a reputation as a “nuisance” when they repeatedly became entangled in fishermen’s gill nets, causing inadvertent damage to the equipment, not to mention that they were also being killed in these nets.

In 1955, to alleviate this “nuisance,” British Columbia (BC) fisheries patrol vessels started ramming basking sharks with boats and even attaching large blades to the bows of their ships that were designed to slice the sharks in half. This practice rapidly turned into a free-for-all, with people shooting basking sharks with guns, harpooning them, and basically massacring them in any way imaginable. As a result, basking sharks were nearly pushed to the brink of extinction, all in the name of protecting BC’s salmon fisheries—how absurd!

Greenland Sharks -- Yet another “nuisance” species, whose only crime is becoming entangled by the thousands in the lines and nets of halibut trawlers that are invading its natural habitat, is the Greenland shark. It was announced in the summer of 2009 that scientists had begun actively researching ways to use the flesh of this shark, whose meat is oily and toxic to humans, to create biofuel by mixing it with macro-algae and household wastewater. The intent behind this plan is no doubt an effort to legitimize the senseless slaughter of this species and the dumping of thousands of these large sharks’ bodies into the oceans, because they are not commercially valuable. 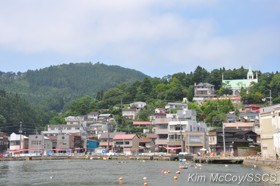 But perhaps the most mind numbing of all is the sheer magnitude of what is currently happening—and has been happening for years—to sharks in the picturesque Japanese coastal village of Kesennuma. Thousands of sharks a day are butchered in this tiny port.

Last year, while in Tokyo to speak at a shark conservation event, I took a side trip along with Sea Shepherd Associate Director, Alex S. Earl, to conduct an undercover investigation and assess the situation. What we found was truly abysmal and made my stomach turn.

Located on Kesennuma Bay in the northeastern corner of Miyagi Prefecture, the fishing village of Kesennuma is situated on an idyllic harbor with rolling mountains in the background. It is a bustling tourist destination for Japanese people, with warm and friendly locals. It is also home to the only shark museum in the country and bears a striking similarity to Taiji’s relationship with its dolphins, given that the entire town is built around and celebrates sharks, but the fishermen have blood on their hands, as they are responsible for the gruesome mass slaughter of these splendid animals at a rate which will see them extinguished from our oceans completely if allowed to continue.

On the morning of our investigation, Alex and I rose early and showed up at the port around 4:00 a.m. Already, there were ships pulling in one by one, lining up to unload their cargo, and we were greeted by steam rising from the bodies of countless dead sharks, piled neatly in row upon row on the concrete floor. As the sun grew higher in the sky, so grew our disbelief at the scene that was unfolding before our eyes.

Photos of Sharks being unloaded from boat
Click to view

While there, we made small talk with some of the fishermen and were told that there are more than eighty boats in the Kesennuma fleet. The smaller boats go out for about three days at a time, while the larger boats go as far as to Hawaii, spending approximately forty days at sea (ten days out, twenty days fishing, and ten days back). The boats are labeled with call numbers according to which prefecture is their home base. For example, MG = Miyagi, HK = Hokkaido, etc. It is rare for foreign ships to come to port in Kesennuma.

We were told that many of the fishing vessels go out targeting tuna, but if tuna are not biting, they adjust the depth of their hooks and fish for sharks instead. We saw boats importing huge boxes of frozen tuna from Fiji and Indonesia because, due to fishery collapse, Japanese vessels simply cannot catch enough tuna to meet demand. Japan is also importing sharks from Spain, Brazil, and Peru in order to meet demand for shark products.

Under Japanese law, it is illegal to bring back just the fins; whole sharks must be landed, and they are methodically finned at port. Despite this, we witnessed and photographed ships bringing in large bags containing only fins. Many of the fins are frozen until winter, because it is too humid during the summer months to dry them out in Kesennuma. Some are actually shipped to China to be dried, and then shipped back to Japan for processing.

By far the vast majority of the sharks brought in are blue sharks. Their tails are allegedly the best for soup, and their heads are cut off at sea to reduce weight (this is apparently permitted).

Photos of Blue Sharks being finned
Click to view

Another common shark to see at Kesennuma are salmon sharks. We were told that their heads are eaten in Yamagata and Akita—the mountain people like them, because they are oily. Their hearts ("shinzo") are cut out and used for sashimi. We watched in utter disbelief as one after another, the hearts were ripped out of each shark’s bleeding chest and tossed into a crate.

Video: Sorting and Cutting Hearts out of Salmon Sharks

We saw other species of sharks there as well, but none rivaled the blue or salmon sharks in number.

Interestingly, Kesenumma’s US-based "friendship port" is Seattle, Washington, which is a stone’s throw away from Sea Shepherd’s international headquarters in Friday Harbor. Another sister/friendship city is Puntarenas, Costa Rica, which was exposed for its shark finning corruption in the award-winning documentary, Sharkwater. A third is Zhoushan, China. One thing is for sure, these “friendship” cities are no friends to the sharks!

The photos and video above depict piles of dead sharks that were taken on one day, in one port, in one coastal city, and in one country. Now imagine this same scene unfolding in multiple cities in multiple countries around the world on a daily basis. How can this possibly be sustainable? It is not!

More photos from Kesennuma at end of article.

The Global Plight of Sharks 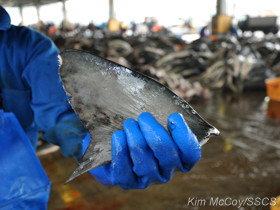 Global shark populations are in a state of dramatic and rapid decline, with an estimated 100 million sharks killed per year. Many of these sharks fall victim to a barbaric practice known as shark finning. Hooked sharks are hauled onto boats, and their fins (the most valuable parts of the shark) are sliced off while they are still alive. Then, in an effort to conserve space/weight, the helpless animals are tossed back into the ocean where, unable to swim without their fins, they sink towards the bottom and die an agonizing death.

As apex predators who have inhabited our oceans for over 400 million years, sharks are vital to the health of the global ecosystem. They are deserving of far greater respect than to be ripped from the oceans so that their fins may be added to a tasteless (in more ways than one) and expensive soup, a soup which may in fact even be poisoning those who consume it due to high mercury content.

Shark populations are being depleted at a rate that is shocking and completely unsustainable. Current death rates far exceed the reproductive capabilities of sharks, and in recent years, some 90% of the world’s large sharks have been decimated. The environmental ramifications of this impending extinction are quite serious—and a tragic legacy to pass on to our children and the offspring of other species with whom we share this planet.

Sea Shepherd will soon launch Operation Shark Friendly, a global awareness campaign, to help educate consumers and businesses about the desperate plight of sharks—not just those who have been officially listed as threatened or endangered, but all sharks. This campaign will provide the public with the materials needed to help consumers understand that sharks belong in the oceans, in which they play a fundamental role, and not in a bowl on someone’s banquet table.

Imagine a world where sharks continue to grace the oceans for countless years to come—and then do your part to help us achieve this goal! 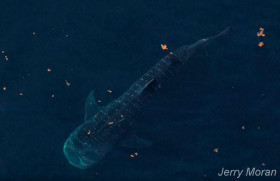