The depletion of the salmon run on the Columbia River can be traced to the construction of the behemoth Bonneville Lock and Dam.  Since 1938, the dam has provided electrical power while destroying the natural migration path of salmon. When you add in overfishing and the introduction of non-native species of fish that prey on salmon, it is easy enough to see that man is the real predator on the Columbia - NOT the sea lions. 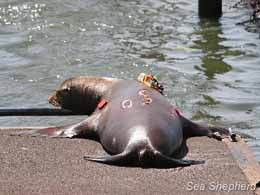 Sea Lions in Astoria, Oregon.
Photo: Kimber HamiltonRecognizing that the real problem on the Columbia River has nothing to do with sea lions, Sea Shepherd Conservation Society began its Dam Guardian program in April.  Volunteer Dam Guardians have been on the banks of the Columbia near the Bonneville Dam and also at the Port of Astoria.  We have witnessed acts of cruelty that would be considered criminal offenses anywhere in the United States but here. We have observed animals being kicked and poked with sticks.  We have repeatedly seen smoke wafting from a cage as a hot iron is pressed into the flesh of previously unblemished animals.  These sea lions are further violated with tracking devices and tags that pierce their flippers.  Tragically, we have seen sea lions trapped in cages and dragged to a boathouse where death awaits.

Recently Scott West, Sea Shepherd’s Dam Guardian campaign leader, accompanied San Francisco school teacher Angela Casey to the office of Oregon Governor John Kitzhaber to deliver hundreds of notes and drawings from elementary school children asking for an end to the cull.  The governor was not available to meet.  He has granted clemency to a convicted murderer, but ignores the pleas of concerned children and adults who simply want to save marine mammals from a senseless death.

The Humane Society of the United States is in court fighting to end this ridiculous seal cull.  Until then, Sea Shepherd will be on the shores of the Columbia watching and reporting to the world.  Will you join us?  Sea lions are not the problem on the Columbia.  The problem is the damn dam and those who think humans should have exclusive fishing rights to salmon.

Please contact the Oregon and Washington Governors and ask them to stop killing sea lions: