After public pressure resulting from the photos, the company admitted to stealing the gravel from the home of these endangered penguins and was fined by the Port Authority. Yes, just that, fined. 600 endangered penguins had to leave their home because of the irresponsibility and greed of a salmon farm; it is very unlikely the animals will return to this place. Their nests were built just a few meters from where the workers extracted the gravel. Becoming frightened and unsafe and having their homes destroyed, the penguins fled, and all the salmon farm received was a fine-no sanction that could give a strong message to criminals, or measures to amend and compensate the destruction they caused. 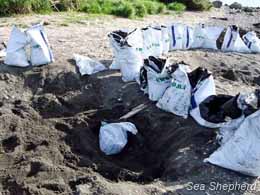 Salmonera Mainstream attempts to hide their illegal acts by burying the gravelWhat Salmonera Mainstream did is an environmental plunder. Salmon farmers in Chile know very well that they can do whatever they want and in the worst circumstances merely pay a fine; this is exactly what happened here. Companies like this will always use the “creates jobs, takes jobs” argument to justify their abuses, despite the ecosystems and animals affected or killed. The law is not enough to stop them and authorities such as Sernapesca (National Fisheries Service) who could actually do something are more interested in condemning sea lions to death and giving large fishing quotas to big fisheries. Thus, when there is no justice or morality, looters take what they want from nature with no consequences.

This is not out of character for Salmonera Mainstream. They have been in other involved in despicable and illegal activities. For instance, in 2006 they were fined a mere US$800 for contaminating with industrial liquid waste. Of course not a meaningful punishment, but it demonstrates the attitude of this company. Fines are always less than the profit they receive, so any respect or ethics are put behind the desire for money.

Today, Salmonera Mainstream is the face of evil against the Earth. Tomorrow, there will be another one and so on. Profit is still the motto of too many powerful environmental criminals. The concepts of respect, harmony, empathy, and even common sense do not factor into their thinking. Regulations and inspections are not enough. If an industry or commercial activity damages the earth, it simply should not be allowed to exist. If a company is eager to get involved in a practice as destructive as salmon farming, then taking things a few steps further and destroying the habitat of endangered animals is not that big of a leap-that is what Salmonera Mainstream has demonstrated. 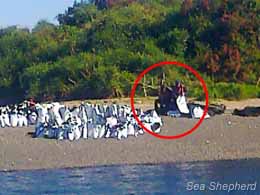