Rolling Down To the Coast of Antarctica

Rolling Down To the Coast of Antarctica 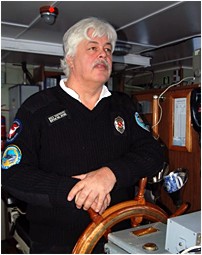 The Sea Shepherd Conservation Society ship Steve Irwin is making good time as we head towards the coast of Antarctica.

Since departing Melbourne on the 14th of February, the weather has been incredibly pleasant. Looking at the weather charts it appears as if divine providence was parting the storms to let us have safe and quick passage through the Roaring Forties and the Furious Fifties.

Calm seas with the constant company of albatross and petrels and the occasional visit by whales have the crew happy, motivated and inspired. Of our three voyages South this season, this crew is the most dedicated and courageous of the three, all eager to engage the pirate whalers and willing to take whatever risks that I ask of them.

The Australian Customs and Fisheries Patrol vessel Oceanic Viking has left the Japanese fleet to return to Fremantle. This leaves the Sea Shepherd crew all alone with the Japanese fleet outnumbered eight ships to one.  They have arms, explosive harpoons and a ruthlessness that only whale killing cowards can possess.

We have our love for the whales and the oceans and a courage born of that love.

Recently a columnist in the Sydney Morning Herald made fun of my reference to having a whale point the way to the whaling fleet. He dismissed it as nonsense. That was before we found the fleet after traveling in the direction the Humpback pointed.

Is there magic out here on the ocean? Of course there is. When we feel the sea we become intimate with the sea and that intimacy fires the imagination and stokes the flames of intuition and after more than three decades of sea-battles, pursuits, searches and dramatic confrontations I have learned that it is intuition that pulls us through where all else fails. This is something a landlubber journalist has no conception of and thus his opinion on our experiences have little merit.

We will have the Japanese whalers in our sights within a week. The crew and I can smell them and we are eager to have a go at them once again, to chase them from the Whale Sanctuary and to intercept, irritate, harass and trouble them, knowing that every hour we delay them buys time for whales to escape.

It worries me sick knowing that whales are dying as we desperately work to run the killers down. My heart breaks at the thought of those vicious explosive harpoons shredding internal delicate internal organs as the hot blood of the whales spurts obscenely into the cold waters.

Our critics can moan and complain about how we are insensitive to Japanese culture and that we are being irresponsible with the risks we are taking. None of these complaints concern me.

Our clients are the whales and we intend to fight for them. I don't believe that the Japanese people choose to embrace such savage killing as part of their culture. The whalers do not speak for the Japanese people and we have Japanese supporters who are appalled at the obscenity of whaling.

As for taking risks, we are fighting a war here to save the whales and risks are acceptable in any war and although we do not cause harm to our enemies, we are prepared to take the risks required to protect life.

We intend to throw ourselves upon the Japanese whaling fleet in the spirit of the Divine Wind for as the great Japanese writer and strategist Miamoto Musashi once wrote, "The Way of the Warrior is a resolute acceptance of death."

Onward and forward we go, getting closer to the Japanese whale killers everyday.