Reflections on Meeting with the Namibian Ombudsman

Prior to the meeting, delegates had an opportunity to mingle with each other and the press was granted photo opportunities for their respective publications. The ombudsman was open and inviting when informal discussions took place. He clearly articulated his expectations and the roles the various stakeholders had to play in the meeting. He pressed upon the importance of factual representation, as he cannot come to fair and objective conclusions when making his findings based on emotion and supposition alone. To that degree, all anti-lobby groups performed the task exceptionally well. There was a strong united front and all were in agreement that the harvest is not only inhumane, but it is without a shadow of a doubt, in violation and breach of constitutional and human rights based on local legislation pertaining to both the harvest and the protection of animals.

The South African Seal Saving Initiative (SA.SSI) presented evidence of human rights and constitutional violations in this particular marine mammal “conservation management” program, highlighted the documented link between animal abuse and domestic abuse; and with solid CITES trade data, questioned how tightly this trade is actually regulated. On average, just under 42,000 sealskins and skin pieces are exported under the CITES agreement over a period of 16 years. This excludes data submitted for 2010 that shows that only four skins and six leather products were exported for the entire year. If the annual total allowable catch for the harvest is 85,000 pups and 6,000 bulls, it stands to reasonably question the balance thereof when presented by export permits granted by CITES. Yet the Namibian government still maintains, and it was mentioned in the meeting, that no contravention of the agreement takes place, and that the agreement is taken seriously and conditions thereof are strictly adhered to. A statement issued by the Ministry of Fisheries and Marine Resources and published in newspapers on the morning of the meeting states that the Cape fur seal is not an endangered species as per Appendix II (CITES), but that this listing is a case of mistaken identity as the Cape fur seal looks like another seal species found elsewhere in the world.

This portion of the page-long statement reads: 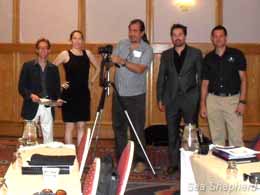 Representatives from various conservation groups. Photo: Nikki Botha As diligently as anti-lobby groups performed their required task at the meeting, as negligibly the pro-lobby performed theirs.

Unfortunately, the representative of Seal Products (Pty) Ltd., chose to spend his allotted 30 minutes offending the majority of the stakeholders by spewing nationalistic, bigoted, and xenophobic rhetoric and failed to give any data/information or present the ombudsman with any facts to corroborate the legalities of the harvest. He, on more than one occasion, made it known that he was insulted to have to share the platform and the room with “these foreigners” and “these people.” He claimed that our presentations and arguments are based on nothing more than sensationalism and emotion. His tangent was reminiscent of a Mugabe type of mindset.

The representatives for the Ministry of Fisheries and Marine Resources didn’t fare much better. The speaker for the group accused some stakeholders of being criminals by doctoring footage of the harvest (taken by award-winning cameraman Bart Smithers) to cause sensationalism, and saying that seals don’t eat fish. Again, references were made to “those people, these people, the foreigners, and the Europeans.” Poorly constructed and ill explained graphs were submitted as evidence to support sustainable utilization, and vague, unsubstantiated claims dominated his presentation. The content of his speech was offensive enough that two stakeholders got up and left.

As the ombudsman was not there to deliver judgment, but to collect substantiated information to come to an informed conclusion regarding the legalities of the harvest, he patiently continued to listen and ask questions if certain issues needed further clarification.

The stakeholders were deeply disappointed by the xenophobic attitude of the pro-harvest lobby representatives. Not only was this uncalled for, but it served no other purpose than to demonstrate a clear lack of understanding in their own processes (so much so that their arguments focused on insulting visitors to their country) and uncooperativeness in finding a peaceful, non-violent resolution to this issue. Although the ombudsman encouraged openness and honesty, the blatant xenophobic attack marred the meeting and alienated friends of Namibia who have great concern over the impact of the harvest on the good citizens of a truly breathtaking country.

The ombudsman repeatedly requested that facts be presented and the ill-prepared presentations delivered by the pro-harvest lobby groups are dismissive of the task of the ombudsman. All stakeholders were given an equal opportunity and these groups squandered a golden opportunity to prove anti-harvest lobbyists wrong. Their disdain prevented them from participating in a meaningful and constructive discussion. Many of the stakeholders went through great lengths and effort to present their arguments and listen to counter arguments. The majority took time away from their families to contribute to this meeting.

It is abundantly clear that we are not fighting a cause but a mindset based on a premise of nationalism and cultural pride. However, there is no excuse for exploitation, torture, maiming, and/or abuse of any kind. This kind of negative behavior has no place in civil society – culture should be a malleable, adaptable, and an evolving concept.

In a subsequent newspaper article, also published in the state-owned New Era, Hatem Yavuz, a central character in the harvest, described the meeting as a “waste of time and noise pollution.”

This statement is highly insulting and disrespectful to the Office of the Ombudsman. It makes a complete mockery of the task entrusted to his office. It also implies that calling for stakeholders to present their arguments is nothing more than bureaucratic whitewash and that the ombudsman has no intention of honoring his commitment. SA.SSI and Sea Shepherd trust that his office will take this in to consideration when making his findings.

Our sincere gratitude goes to Vanessa, Elize, and advocate John Walters (the ombudsman) for the superb organization and the warm and friendly reception. Thank you also to Steve and Laurens from Sea Shepherd for your support and friendship, Pat and Sheryl, Dr. Gibson, Andries, and Francois. May we grow from strength to strength in our quest to change this world in to a peaceful home for all living beings.

*Sea Shepherd and SA.SSI believe in the preservation of all sentient life, but have particular focus on marine mammals and the important roles these animals have to play in maintaining a healthy planet. It is on this basis that these two organizations have allocated resources to fight this senseless slaughter. The issue is not an exclusively Namibian issue. Actions such as the mass killing of apex predators have a domino effect on our oceans and this domino effect is almost always a negative one. Both organizations will continue to oppose and actively engage those who believe in the desecration of that which constitutes 70% of our planet.