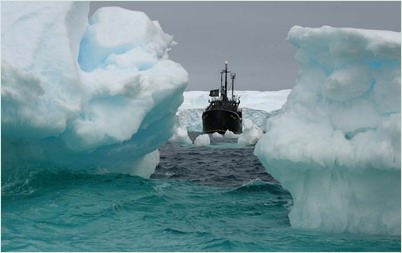 Today is the last day of the year and time for reflection on what we have achieved in 2005 and what we hope to achieve in 2006.

It has been many years since I first established the Sea Shepherd Conservation Society. Twenty-eight in fact.

Sometimes I think it has all gone by so fast and at other times I feel like it has been a century. So many voyages, so many campaigns, so many victories, and so many defeats.

It is like being a soldier in a war that never ends. Our victories are always temporary but unfortunately our defeats are almost always permanent.

But after all these years, we remain as much of an activist organization as we were back in the Seventies, the Eighties, and the Nineties. This is why on the eve of the first day of the New Year, I find myself on the bridge of our valiant ship Farley Mowat in one of the most remote, most beautiful, and most hostile regions of the planet.

Down here at the bottom of the world searching the frigid, iceberg-strewn Southern Oceans for the pirate whaling fleet of Japan.

The weather changes here by the hour - from ferocious stormy gales to seas as flat as a millpond, from blinding whiteouts of zero visibility to extraordinary clear panoramas of a white and blue world dominated by massive mountainous islands of ice and waters populated by penguins, seals, whales, and seabirds. One hour the summer sun is shining and the next the summer snow is falling.

All of this during days that have no end. We have not seen the moon or the stars for a month, and midnight is as bright as noon in a region where the sun does not set or rise.

What is most striking about Antarctica is that it is evident that this is not a continent dominated (as yet) by humanity. This is an environment unforgiving and coldly hostile to people, yet so warmly embracing of the creatures who choose to live here.

When I see the cute and comical Adelie penguins walking and sliding on the ice or rocketing through the icy waters, I find it unthinkable that people once threw them alive, by the tens of thousands, into vats to extract less than a litre of oil from each one.

These Japanese harpoons that rip the living flesh of intelligent leviathans will also be unthinkable years from now when the whales are gone forever, exterminated by our ecological foolishness unless, with your help, we can stop them now.

We covered great distances in 2005. From defending harp seals off the Labrador coast at the beginning of the year to defending whales off the coast of Antarctic at the end of the year. From the top of the world to the bottom, from the Western Hemisphere to the Eastern Hemisphere with campaigns in between at the equator in the enchanted islands of the Galapagos. 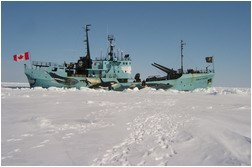 We confiscated illegal longlines, fought battles in Canadian courts, cleaned up an oil spill in the Galapagos, skirmished with sealers on the ice, and chased whaling ships.

We were almost cut in half by the Japanese factory ship Nisshin Maru on Christmas Day. Some of us survived being tossed onto the rocks by a pounding surf at Pitcairn Island and being marooned behind the reef at Henderson Island. We survived two hull breaches in icy cold waters off Eastern Canada.

During the same year, I met with the President of Senegal to advise on solutions to  illegal fishing problems. We exposed the practice of using puppies and kittens as shark bait in La Reunion Island and are still fighting to end this cruel practice. We consulted with the government of Mozambique on illegal fishing and signed an agreement to provide our patrol boat Sirenian to the Galapagos National Park on a permanent basis to patrol the marine reserve and to intercept poachers. Sea Shepherd members went to Taiji, Japan, to defend dolphins and opposed the efforts by San Diego to eradicate a colony of seals.

All in all, it was a year of activism and of achievement.

Sadly we mourned the loss of Robert Hunter who died in May. Bob had sailed on so many Sea Shepherd campaigns between 1990 and 2001. His daughter Justine sailed with us back in 1987 and his daughter Emily is with us presently in Antarctica.

We mourned the loss of Tim Carr who died in November. Tim was our representative for years in Maui and an incredible environmentalist.

This Antarctic campaign is dedicated to both Bob Hunter and Tim Carr. It is also dedicated to Canadian environmentalist Gary Gallon who died three few years ago and whose daughter Kalifi Ferretti-Gallon sails with us today as Bosun on the Farley Mowat in the Southern Oceans.

I spoke with our International Chair Farley Mowat on Christmas day and he asked me to convey to the crew just how proud he is of what they are doing. "These people who have volunteered their holidays and time away from their families to defend the whales give me hope for our species. I am proud of each of them and honoured that they sail on a ship that bears my name."

And as captain on the Farley Mowat, I am also proud of this crew of multi-talented volunteers who took time off from their jobs and away from their families to chase pirate whalers across the waves.

As I complete this message, our ship is moving through chunks of ice. Four large fin whales are swimming along beside us, their spouts blowing in unison, their backs rolling like giant mandalas on the surface of the sea.

What are they thinking? What is their future? Maybe one day we will communicate with them, but to do that they need a future, and that is why we are down here at the bottom of the world on this day in pursuit of their killers.

May we have whales forever.