Paving Paradise in the Enchanted Islands

Paving Paradise in the Enchanted Islands

A few years ago a Sea Shepherd crew cycled the 20 miles from Baltra to Puerto Ayora on Santa Cruz Island and documented over 135 dead birds in one day. Galapagos bird populations are being severely impacted by roadkill and the introduction of alien rats, cats, and dogs.

There are serious problems in the islands as fishing, eco-tourism, and population increases threaten to turn the paradise that Charles Darwin once studied into a wasteland.

The Sea Shepherd Conservation Society remains in the Galapagos as a permanent presence in the islands working with the Ecuadorian National Police and the Galapagos National Park to protect and conserve this unique eco-system.

Report on excessive transportation on Santa Cruz
by Alanna Jenkins

The Galapagos Islands are believed to be a place of simple tropical living. Most people learn about the Enchanted Islands from travel pamphlets displaying snapshots of blissful vacationers snorkeling with sea lions and photographs of breath taking landscapes. The natural beauty, warm weather, extraordinary wild life, and lack of modernism all contribute to the tourism. However, the 120,000 tourists a year may not be aware that the tourism is slowly deteriorating the natural island paradise they wish to encounter first hand. The majority of unsuspecting visitors are shocked to see the amount of innovation in Puerto Ayora on Santa Cruz. It is certainly not a sleepy little village, but a metropolis supporting a population of thousands.

Santa Cruz has the largest population in the archipelago of an estimated 25,000 people. Means of transportation vary from personal cars, mopeds, motorcycles and bicycles, to buses and abundant taxis. Numbers have increased dramatically since 1996 when the first taxi appeared. According to a local taxi driver, there are six different taxi companies, which equal a total of between 275 and 300 taxis on Santa Cruz alone. Each taxi averages about 34 gallons of petrol per week, thus approximately 500,000 gallons of petrol is burned per year- just for taxis.

In order to get an idea of exactly how many taxis drive through town in an hour, I sat in two different locations and counted passing vehicles. I counted everything that passed by on Baltra road heading into town on Thursday, July 17th and from the Sea Shepherd office heading out of town on Wednesday, July 16th. The counts include taxis, personal cars, buses, mopeds, motorcycles/dirt bikes, utility vehicles, and bicycles.

In one hour, on average 406 four wheeled vehicles drive south down Baltra road towards Charles Darwin Avenue in Puerto Ayora, 263 of which are taxis (61% unoccupied). Only 106 bicycles pass by in one hour, 74% of all passing means of transportation emits CO2. In a twelve-hour span, an estimated 4,884 motorized vehicles travel Baltra road into Puerto Ayora, obviously many of those are the same cars making multiple passes.

Also on the other end of town, outside the Sea Shepherd office, counts were taken. The majorities of vehicles that travel down Baltra continue through town and pass the office. In one hour, on average 333 four wheeled vehicles pass by, 227 of which are taxis (63% unoccupied). Only 92 bicycles pass by in one hour, 73% of all passing means of transportation emits CO2.  In a twelve-hour span, an estimated 3,996 motorized vehicles pass by the Sea Shepherd office.

The amount of transportation on the islands appears to outweigh the need, unnecessarily burning large amounts of petrol and emitting significant quantities of CO2. Other islands have different (better) systems where taxis only come when called (Isabela) or where taxis wait at certain designated taxi-stands (San Cristobal) or a complete lack of taxis (Floreana). 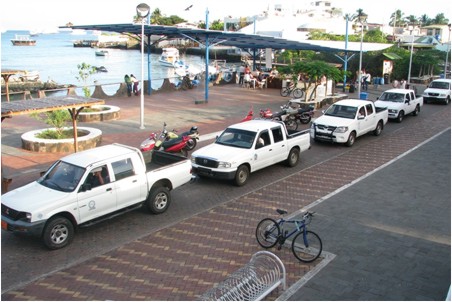 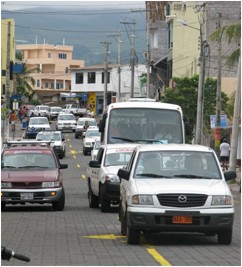 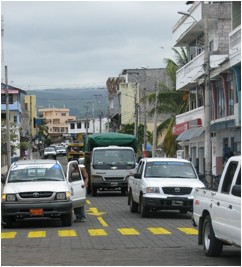 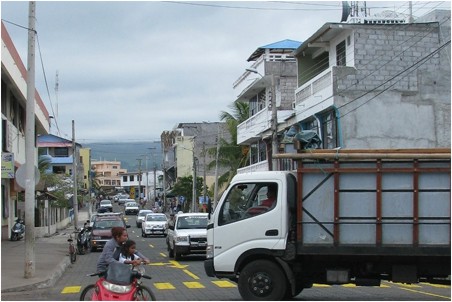