Our Efforts to Assist at the Tasmanian Whale Stranding

While we are not fully trained in dealing with whale strandings, we have a pretty good understanding of the basic needs of these animals. More importantly we have passion and a commitment to do everything in our power to help. Having sailed as crew onboard Sea Shepherd's ships, we have braved the stormy waters of the Southern Ocean and the icy conditions near Canada's North Eastern Coast. We've also witnessed first hand the deliberate killing of the marine mammals we seek to protect. The shallow sandbanks near Perkins Island should pose less of a challenge to us.

But with no way of heading out to the site of the stranding and with darkness creeping in, we had to wait until the next morning. Steve, a local boat owner, agreed to take us out at high tide. It was an awful sight. The whales, possibly having attempted to help each other free of the sandbank, were wedged close together. We saw some whales still alive, weakly waving their flippers. After a brief survey of the situation, our boat had to return so we documented what we could and made our way back to shore. A few hours later we managed to go back to the site, this time at low tide, we stepped onto the sandbank and got close to the whales.

There was some attempt to waving us away from the whales - the suggestion seemed to be that, despite the many official visitors around, it was dangerous for us to approach due to tissue sampling taking place with sharp equipment. However we were eventually able to get close to the whales. As eyes were removed for research and jaws cut off to stop poachers stealing teeth, we saw the last remaining whale struggle to survive. As we approached, a member of the Parks team threw buckets of water over sheets laid across its skin. Between the sheets, blistering burns were clearly visible. Having just returned from a campaign to save whales in the Antarctic, it was a strange feeling to stand in tepid water mixed with whale blood and be surrounded by so many whale carcasses.

Once again we had to head back to shore with the boat and left the whales with a feeling of sadness and helplessness. One of us was able to return later: at this time she sat with the dying whale and tried to provide a moment of comfort after the team had packed up for the day. When forced to leave, she would be alone again to struggle into the night through high and low tides.

There is no doubt that the geography of the stranding made rescue difficult. The sandbank was surrounded by a stretch of very shallow water in the direction of the sea.  As with all strandings, the chances of survival are heightened by an expeditious return to the sea. In this case, the rescue team would have to move the dead whales to make way for the living.

In the future we hope that Tasmanian authorities place more value on the role volunteers can play in assisting at whale strandings. This involves finding innovative solutions to problems like risk and public sensitivity, which were cited as cause to exclude volunteers at this stranding. For example, in this case the public could have remained distant at high tide but been safely invited to dig trenches around the whales at low tide, while maintaining safe exclusion zone around the bodies themselves. It would have then been easier to refloat bodies or the surviving whales at high tide. In our efforts to volunteer we were never asked about our level of expertise or training. We had time and dedication and could have gathered more people and resources to help.

Retrospectively, comparing the media reports of the official response to the event to the reality on the ground, the picture painted in the media was overly optimistic about the chances of assisting the whales. Informing the public accurately of the situation is an important role of the media which helps ensure transparency of actions of governmental and publicly funded bodies. Unfortunately few journalists have time to travel to a remote site to gather first hand evidence: we met none during our time in Smithton.

The importance of volunteer assistance is recognized by other authorities around the world. If we are passionate about saving the animals who face death in these unfortunate events, we should work together. With all hands on deck we can and will make that difference. 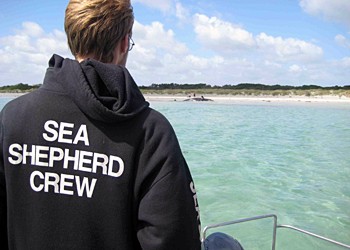 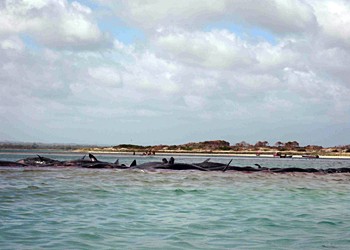 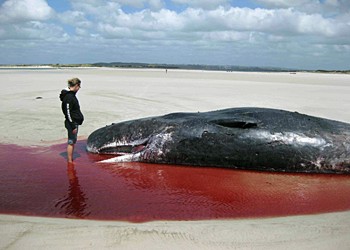 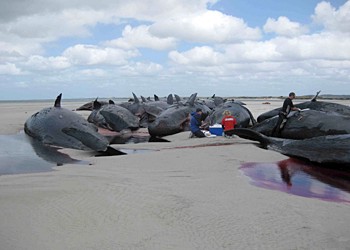