Can a small handful of volunteers bring down the largest whaling fleet in the world?

The answer is yes.

We have the powerful Japanese whaling fleet on the ropes and all we need to do is deliver the knock-out punch.

The Japanese pirate whalers are hurting bad. They are over fifty million dollars in debt and we have stopped them from getting their full kill quota for three years in a row. 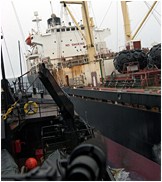 Our first campaign in 2005/2006 saw us chase the fleet for 3,500 miles westward along the Antarctic coast. Although handicapped by a slower vessel we confronted them three times and we kept them on the run. We sideswiped their supply ship and forced them to return to Japan and by the end of the season, the whalers were 83 whales short of their quota. We had cut their kill numbers by 10%.

We knew that we would need a faster ship if we were to return in 2006/2007. We also had the problem that our ship the Farley Mowat was placed under arrest in South Africa because of pressure from the Japanese and Canadian governments.

Thus began the impossible mission of Operation Leviathan. As I searched the globe for a faster ship, Captain Alex Cornelissen deftly managed to cut the Farley Mowat out of Cape Town harbour by departing covertly at 0300 Hours in the morning, following a freighter out in the dark with all lights shut off. They then successfully eluded the South African navy escaping into the Indian Ocean.

Following that daring escape the Farley Mowat weathered extremely severe weather until reaching the friendly port of Fremantle in Western Australia where the ship and crew were welcomed as heroes and Mayor Peter Tagliaferri presented us with the honour of having Fremantle declared our honourary home port.

Meanwhile I had inspected a ship in Malta but it was too expensive to purchase. By June I had located a 2nd ship in Trinidad and after spending two months working to purchase the vessel we were forced to drop the acquisition due to illegalities with the ship's owner.

With the next whaling season rapidly approaching, we finally found the perfect ship in Edinburgh, Scotland in October. It was the Westra, the retired Scottish fisheries patrol vessel. We bought it during the first week of November thanks to a bank loan from a very loyal and generous supporter. By mid-November the ship was in drydock and by December 5th, the Westra now renamed the Robert Hunter was heading south down the length of the entire Atlantic Ocean through the Straits of Magellan reaching the Ross Sea by January 19th, 2007.

It was not easy. The Japanese government has pressured the Canadian government to pull our flag. We re-registered with Belize but within 9 days, the Belizean flag was pulled but not before we were able to depart from Tasmania southward towards the coast of Antarctica. We entered the Antarctic Whale Sanctuary as an unregistered pirate ship.

Together the two ships hunted down and engaged the Japanese fleet twice.

Then an accident occurred on the Japanese factory ship Nisshin Maru - a fire that killed one of their crew and crippled the ship.

The Japanese whaling fleet was forced to retreat back to Japan with less than half their kill quota. More than 500 whales were spared.

The Japanese government was furious and forced the British registrar to pull our registration from the Robert Hunter leaving us flagless.

We quickly re-registered our two ships under the Dutch flag, a nation not vulnerable to being dictated to by Japan or any other pirate whaling nation.

In June 2007, I entrusted Captain Cornelissen to take the Farley Mowat to the Galapagos and then onto Iceland for Operation Ragnarok, the campaign to intervene against illegal Icelandic whaling operations.

The Robert Hunter remained in Melbourne to prepare for a return to the Whale Sanctuary in December.

Once again we had the Herculean task of raising the funds for the next campaign.

By the time the Farley Mowat reached the Galapagos, Iceland decided to cancel its whaling operations and the Farley Mowat turned its attention to confiscating illegal long lines, intervening against shark poachers and stopping plans by a company called Planktos to dump iron dust into the ocean off the Galapagos.

That summer we investigated and seized 45,000 shark fins and over 100,000 sea cucumbers from poachers and smugglers in Ecuador.

I was awarded the Amazon Peace Prize by the President of Ecuador and a contract was placed on the heads of Sea Shepherd Galapagos Director Sean O'Hearn and me by the sharkfin mafia of Manta, Ecuador. O'Hearn was forced to resign and one of our police officer supporters sent me a bullet proof vest.

By the end of the year, Planktos had been stopped. Captain Alex Cornelissen took up the position of Sea Shepherd director for the Galapagos and I was ready to take the helm of the Robert Hunter for the return voyage to Antarctica in a campaign we named Operation Migaloo.

In a move that the late Robert Hunter would have approved of, I renamed the ship the Steve Irwin to reflect the passion of Australians in opposing illegal whaling and to focus on the symbol of the whales of Australia - Migaloo, the beloved white Humpback whale who the Japanese said they would harpoon if they got the chance.

We headed southward on December 5th after Teri Irwin officially launched the ship under Steve's name. Onboard was a film crew from Animal Planet to begin work on a series to be called Whale Wars.

It was a long, dangerous, and successful pursuit as the Steve Irwin covered over 22,000 miles in three legs chasing the Japanese whaling fleet across the vast expanse of the remote and unpredictable Southern Ocean. We boarded a harpoon vessel creating an international incident that captured headlines around the world. Most importantly we shut down whaling operations to the point that once again the whalers failed to take their kill quota.

It was an economic and public relations disaster for the Japanese whaling fleet and their frustration was demonstrated when they threw concussion grenades and shot at our crew, one of the bullets striking me in the chest and a concussion grenade throwing cameraman Ashley Dunn to the deck.

Fortunately my bullet proof vest stopped the bullet and there were no serious injuries from the confrontation.

If we could secure another ship we could shut them down 100%.

And that is our impossible mission for the present. We can and we will return to the Southern Ocean Whale Sanctuary in December with the Steve Irwin. The task now is to find and secure a 2nd fast ship to relieve the Steve Irwin when it is forced to return to port to refuel.

Towards that end we are working to raise more funds to purchase a 2nd ship. We also need to raise funds to fuel, outfit and provision two ships.

We won't have any problem crewing the ships. We are being overwhelmed by applications. This is a relief because now we will be able to crew the ship from a pool of many individuals of many skills and abilities. Our last campaign was slightly handicapped by a few quitters and a few faint hearted types who did not seem to understand that to be a Sea Shepherd crewmember requires a rare type of passion and courage. If someone is not willing to risk their life for the defense of a whale they don't belong on our crew. And if they don't understand why we would ask that question they don't belong on our crew.

I personally believe that taking risks to protect endangered species is far more noble and worthwhile than risking one's life to protect real estate, money and oil wells and they pin medals on people who do that.

We fight for life, for diversity and for the future of humanity and all living things and in my opinion that is the ultimate justification for sailing into harm's way.

This brings us to Operation Musashi.

Miyamoto Musashi is a legend in Japan and I chose the name because Musashi wrote of the strategy of the twofold way of pen and sword. In other words Musashi knew that in addition to aggressive intervention, it was necessary to communicate and educate.

Last year for the first time ever in Japan, the issue of illegal Japanese whaling made the headlines. The reason is that our dramatic and aggressive tactics were news and this enabled us to tag messages to the news stories about the slaughter of the whales.

This has brought us support in Japan from Japanese people who oppose the whale killing policies of their government.

Our interventions are the sword of direct action and the media is the pen and thus our approach is exactly what Musashi had in mind.

A few years ago, everyone told us that fighting the Japanese whaling fleet was a losing cause - the ruthless crimes in the Southern Ocean were being committed by a Yakusa controlled union crewing large ruthless killing machines. The Nisshin Maru was the formidable Cetacean Death Star. The murdering crimes of the whalers were taking place over vast stretches of iceberg studded, frigid, storm tossed hostile seas. We didn't have the money. We didn't have the ships. In other words only a fool would think of venturing into those hostile waters without adequate resources on a Quixotean exercise in futility.

But I remember what my friend Martin Sheen once said to me, "Losing causes are the only causes worth fighting for."

And enough people have called me a fool to the point that I have no problem believing them and thus striking out on the path of the fool like Don Quixote on a hopeless mission to protect innocence and life was, well to be frank, it was very appealing.

And now our hopeless, impossible mission has made such an impact that I now believe we can win this war to drive the criminal whalers out of the Southern Ocean Whale Sanctuary.

There is no question that we have the moral high ground. The Japanese whalers are targeting endangered and defenseless whales in a whale sanctuary in violation of international law and the moratorium in commercial whaling. They are sadistic killers involved with the Japanese Yakusa in an industry that has no honour and of no necessity to the welfare of the Japanese people.

The Japanese government can call us eco-terrorists and pirates until Mount Fuji erodes away but the fact remains that we fight for life and they kill for profit.

In this case the good pirates wear black and our Jolly Roger is a symbol of hope for the whales and for the protection of our oceans. We are pirates of compassion and life in a battle to subdue and defeat the pirates of greed and death.

Woody Allen once said that 90% of success was just showing up. In this case he is absolutely right. We just need to continue showing up on the tail of the Japanese fleet, harassing them and intervening against their killing. We need to wear them down by forcing them to endure financial losses every year until they are so far in debt they will have to submit.

We can and we will destroy the Cetacean Death Star. We intend to sink the Japanese whaling fleet - economically. Without hurting a single person we can drive their operation into bankruptcy and we can end the killing.

Your investment in our operations have and will continue to show results.

What is the life of a whale worth to you?

Your trust and support for my crew and I will be repaid with the gift of life for the whales and a gift of promise to the future survival of our oceans. 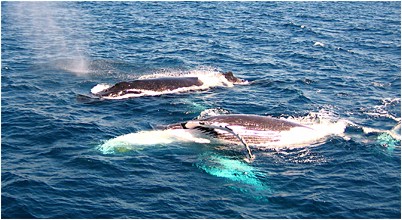