Operation Desert Seal: From the Frontlines of Seal Wars

On the first day when I arrived in Namibia, I had just a few minutes to prepare myself to go out on a night reconnaissance, while Laurens and the rest of the team had already been on the ground for a few days and he was keen to get on with things, as well as the media crew who would be filming the mission for a spinoff television project titled Seal Wars. Both teams were eager to test equipment – especially the night vision gear.

On our way out of the town and away from our supposed secret location, we were passed by police cars patrolling the foggy coastal areas (the police would end up being our constant companions over the coming weeks). We were just a couple of hours into our testing when we received a telephone call from our home base – we had been robbed. 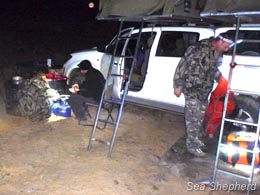 Preparing for a beach stakeout under the
cover of night Upon returning to base, we immediately saw how serious it all was. The house had been broken into by armed burglars, chasing one of our female crewmembers into the street, while our computers, cameras, some passports, expensive night vision and radio gear, money, and oddly, almost all our hard drives were gone.

Our security detail and local Namibian specialist immediately went off to search for our missing equipment. Then things became extremely odd – the police turned up with some of our missing gear, but none of the hard drives and only some of the camera gear, to this day we don’t know if the police staged the burglary or just got lucky – claiming they ‘tracked the footprints’ of the burglars down a tarmac road to our discarded bags, with some of our gear left inside.

This was the first night of what was to become the strangest, and possibly the most dangerous mission Sea Shepherd had so far ever undertaken. Over the coming month, we had to change our location at least half a dozen times because we were clearly under surveillance wherever we went. Our mission was multi layered and that meant a lot of risk around the tasks for which we could be uncovered.

We wanted to film the seal slaughter itself with remote cameras, we wanted to follow the process of slaughter to seal processing at the infamous seal processing factory in Henties Bay, we wanted to expose the corruption and the illegal sale of seal products that are protected by the CITES agreement, and we wanted to learn who the key players are in this despicable business. We had no idea at that time that the corruption went to the halls of government and that the Namibian Navy, military, police, sealers, and unknown private security would be brought to bear on our small group of activists doing whatever they could to keep us from uncovering the truth.

What was to follow would included shakedowns by angry sealers in Henties Bay, dramatic foot chases through the desert at night, secret filming, car chases, and the navy deploying warships to protect the seal slaughter. I arrived back home today, and as I write this account, I still can scarcely believe this all happened. 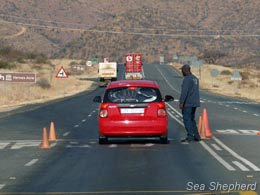