No Protection – No Hope 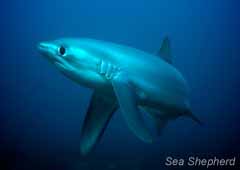 thresher shark - photo: Gary StokesThe report itself could be made into an international best seller, with the key character being an evil doctor, intent on the slaughter and annihilation of the world’s sharks. Other characters lurk within it’s pages as well, from the kingpins of the shark industry meeting in closed offices, international authors, a former CITES chairman and even a special guest appearance by a certain Mr Glenn Inwood just to add extra flavour and to spice up the story further. Glenn is most famous for his role as the PR puppet for the Japanese Whalers, but also has been busy helping out the shark fin industry and the doctor in their anti-anti-shark fin campaigns!

Without the removal of Dr Giam and the introduction of ‘Conflict of Interest’ provisos to CITES, NOTHING will ever be protected and the bio-diversity of life on OUR planet will lie in the hands of those whose only wish is to exploit for their own personal greed.