The permits to cull the Cape Fur seal are issued by the Ministry of Fisheries and Marine Resources, headed by Bernard Esau. The Ministry claims that the killing is done for conservation purposes (i.e. a cull) whereas those fighting against this know it is a harvest due to the financial gain of the killing. Unfortunately the Namibian government fails to realize that increased fishing quotas might have something to do with their dwindling fish stocks, as opposed to the seals being used as convenient scapegoats by claiming that they’re eating all the fish.

The killing of these animals is a barbaric practice satisfying man’s greed and vanity. Bones are made into jewelry and skins are made into boots and other leather luxury goods. However, though the Namibian government claims that no part of the seal goes to waste, Namibia’s income from the seal industry is approximately $120,000(USD), while a single furrier named Hatem Yavuz laughs all the way to the bank with a derived income of $3.25 million (USD) from the sale of pelts. In 2008, the aforementioned furrier signed an exclusive contract with the Namibian Government for all the seal pelts. This contract is apparently valid until 2019. Yavuz resides in Australia and his processing plant is located in Turkey. According to Channel 7 in Australia, Yavuz controls 60% of the world’s seal pelt market. Since Turkey isn’t part of the EU (whose members imposed a ban on the import and export of seal products), pelts are shipped from Namibia to Turkey where they are processed and sold to countries such as China and Russia. 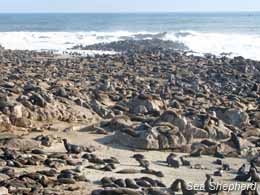 Cape Fur seals gathered at the Cape
Cross ReserveOther than Hatem Yavuz, there are predominantly three white rights holders who benefitted financially from the seal slaughter, while less than 100 disenfranchised, indigenous Namibians are paid a pittance to do the traumatizing, dirty work of bludgeoning baby seals to death. This year it has been reported that the Ministry increased the killing rights from three to six  - much to the chagrin of the original three rights holders, who say there won't be enough product to satisfy the business needs of all the rights holders.

Over and above the increase in rights holders, this year’s slaughter might also see a larger quota. Esau has publicly proclaimed that the killing will commence this year, despite the fact that the Namibian Ombudsman, after meeting with stakeholders (including Sea Shepherd) last year, promised to investigate the legality of the slaughter and release his findings prior to the start of this season’s cull.

Namibia’s beaches are rotten with blood, sour with spilt milk and haunted by the ghosts of butchered animals. But they do their utmost to hide this from the millions of tourists that visit this African country annually. The killing is done in the early hours of the morning before the area is opened to tourists. Independent reports have illustrated that compassionate eco-tourism is 300-500 times more lucrative than the cruel business of seal killing.

Sea Shepherd dared to venture into the killing fields of Namibia in 2011, and the results of Operation Desert Seal exposed, to a much larger global audience, the ugly business that Namibia so badly wanted to hide. Namibia’s laws dictate that the filming of the seal clubbing is illegal. These ridiculous laws are seen as a desperate attempt to hide this heinous crime against nature.

Sea Shepherd will continue to fight and will not give up until the Cape Fur seals of Namibia can live unhindered in a country which is otherwise breath-taking. 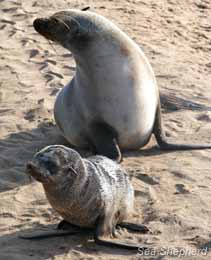 Cape Fur seal with pup at the Cape
Cross Reserve