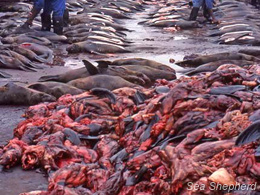 Workers skin thousands of seal pups and dispose of their remainsThe ‘cull’ is driven by only one man, Hatem Yavuz, who has the contract to buy every skin resulting from the Namibian seal slaughter until 2019. He pays $7 per pelt while foreign tourists pay $12 to view the colony. While Yavuz will eventually sell his fur coats for as much as $30,000, local Namibian workers are paid less than minimum wage. There is no profit sharing scheme in place, and less than 150 locals are employed for their participation in this ‘cull.’ "In order for them [the seals] to feel less pain, they need to be killed with a club that has a nail in it,” Yavuz, who describes himself as a so-called animal lover, has said.

The Namibian SPCA, that has the legal powers and mandate to prevent cruelty and end the ‘cull,’ have actually condoned the violent fatal beating of 85,000 baby seal pups.

The Animal Protection Act of 1962 (Namibia) gives the Namibian SPCA the power to arrest and detain anyone caught beating an animal to death.

Sea Shepherd South Africa and the South African Seal Saving Initiative (SASSI) are considering a variety of action-oriented options for later on in the year.

A big thanks you to everyone involved in protecting our wildlife from the exploits of man.

Please click on the "Donate" button below and help Sea Shepherd raise funds to protect and defend seals and ocean wildlife worldwide!