Canada has held our ship the Farley Mowat for four months now. That means they owe us around $120,000 dollars. That's on top of the $3,000 to $4,000 a day they are spending to guard the ship in the harbour at Sydney, Nova Scotia.

The government desperately wants to give the ship back in return for a $50,000 ransom but our answer is that we will only take the ship back under the condition that the charges are dropped against our two officers, the ship is returned in the same condition it was taken, that they pay $1,000 for every day they have held it and that Loyola Hearn apologizes for his blatant act of piracy for attacking and boarding our ship in international waters. And we have no intention of paying a ransom.

A trial date for Alex Cornelissen of the Netherlands and Peter Hammarstedt of Sweden has been set for April 2009. The Farley Mowat will be creating quite the bill by next year, close to a half a million dollars we will sue for, and well over a million and a half in security costs.

All to defend Canadian Minister Loyola Hearn's wounded pride because we humiliated him this year by taunting him into attacking our European registered ship in international waters on the eve of passing a proposal to ban seal products into Europe.

And the reason he attacked and board the Farley Mowat?  To confiscate photos and videos of seals being inhumanely slaughtered so that they could not reach the European Parliamentarians that Canada is trying to convince that the seal slaughter is "humane".

In other words according to Canada the slaughter is humane just so long as they can keep evidence of cruelty from leaving the scene of the crime.

And thus we have the ridiculously Orwellian set of laws called the Seal Protection Regulations.

These regulations make it a crime to approach within a half a nautical mile of a seal being killed. It is a crime to film or photograph or even witness the killing of a seal without the permission of the government. A crime punishable by up to a year in prison and/or a $100,000 fine.

What an incredibly strange nation Canada is. And I say this as a Canadian whose family roots extend back to 1648 in Acadia.

I now live in the United States because I confess I am embarrassed to live in a nation that does not have an Endangered Species Act yet has the Seal Protection Regulations designed to protect slaughter and cruelty on the ice.

I saw my first baby seal killed when I was a boy of 10. I was raised in Atlantic Canada in a fishing village and I remember vividly the helpless look in that seal pup's eye just before a fisherman kicked him and then slit him open from crotch to throat spilling his steaming guts onto the snow as he screamed piteously for mercy.

It is an image that keeps me fighting to protect the seals against the incredible power of the government of Canada to stop us.

This year alone, they spent hundreds of thousands of dollars chasing us through the ice with Coast Guard icebreakers. They twice rammed us in a display of nautical irresponsibility that I have never witnessed in a government agency before. They sent a heavily armed military assault squad to board our ship in international waters and then they seized and continue to hold the ship hostage. They charged European nationals with breaking the regulations despite the fact that they never entered Canadian territory and we have just found out that they also dispatched the destroyer HMCS Toronto from the Canadian Navy to back-up the Coast Guard and the Mounted Police. All of this against an unarmed vessel simply engaged in documenting the slaughter of seals.

On top of this was the use of Airforce surveillance aircraft, and hundreds of personnel from the Department of Fisheries, the Canadian Coast Guard, the Mounted Police, the military and countless bureaucrats. In other words, millions of dollars of tax-payer's money in order to stop us from taking pictures.

Of course it was also to distract from the fact that Canadian government incompetence led to the death of four sealers when their boat overturned while being towed through the ice by a Coast Guard icebreaker.

But Loyola Hearn is a man possessed by a demonic hatred towards the seals and anyone who protects or defends them. We are evil incarnate in his eyes, in it for the vast amounts of money we make from the campaign according to him. (I wish).

He calls us outsiders although Rebecca Aldworth of HSUS is from Newfoundland and I'm from a fishing village in New Brunswick. He calls us money grabbing opportunists although our income is small and he rakes in six figures annually from the tax trough to champion cruelty and to preside over the destruction of the fisheries.

Hearn spews a litany of fabrications to defame any of us who oppose the killing. He is desperately trying to cast people opposed to killing and cruelty as evil and people who skin seals alive and slaughter hundreds of thousands of seal pups as "innocent victims." With Hearn, we have definitely stepped through the looking glass into a world that is bizarre and irrational - the world of politics and special interests where politicians represent the interests of destroyers by persecuting those who champion life and kindness.

The fact is that the Canadian Department of Fisheries and Oceans is the single most incompetent bureaucratic department of the Canadian government. Over the last three decades the DFO has laid waste to the cod fishery and presided over the steady diminishment of fish species and numbers on all three coasts.

Their incompetence is mind-blowing, staggeringly inept and yet this monumental incompetence is tolerated because the industries that have raped the oceans for decades have the DFO bureaucrats in their back pocket.

This cesspool of government corruption continues to raise a stench as they now move to increase the slaughter of Grey seals in an act of petty revenge against the decision by the European Parliament to propose a ban on all seal products into Europe.

But we will never back down to their arrogance. We may lose ships, we may be imprisoned, we may continue to be beaten and threatened by sealers and harassed at the borders but we will never surrender the seals to the perverse evil that Loyola Hearn represents.

An illustration of the harassment that I have received lately is my recent crossing of the border into Canada to attend the memorial for Dr. Lyle Thurston, a friend and former crewmember.

It was in June and I was traveling by car from Blaine, Washington at the Peace Arch crossing. I pulled up and presented my passport to the female border guard in attendance.

Behind her in the booth, a male border guard peered over her shoulder and read my name. He then closed the window and the two talked together.

The woman then opened the window and told me to report inside. No problem. I parked and went inside.

The male border guard than questioned me.

Guard: How long do you intend to stay in Canada?

Captain Paul Watson: Does it matter?

Guard: We need to know how long you will be staying in Canada?

Captain Watson: I have no idea.

Guard: What is your business in Canada?

Captain Watson: None of your business.

Guard: You need to answer my questions Sir.

Captain Watson: And if I don't what are you going to do? Deny me entry?

Guard: I have the power to deny you entry if you don't answer my questions.

Captain Watson: Really? You can deny a Canadian citizen entry to Canada?

Guard: Yes we can.

Captain Watson: Then do it?

Captain Watson: Do it. I can't wait to inform the media how a Canadian citizen is being denied entry into Canada for refusing to say how long he intends to stay in Canada. I can stay in Canada for how long I choose.

Guard: Sir, let me have your car keys. We're going to search your car. Is there anything I'm going to find in there that should not be there?

Captain Watson: "Well unless you plant something, I don't think so."

Guard: "Sir, are there any outstanding warrants for your arrest?

Captain Watson: "Well, you never know. Maybe you should check."

As the Guard turned to check my car, I said to him, "look, I've got a good book here so I'm going to go sit on that bench over there. When you're finished harassing me, let me know, okay?"

Ten minutes later, the guard was back.

He handed me my keys and told me I was free to go.

I thanked him and drove on up into Canada.

As I drove I swore I could smell the scent of bananas in the air. 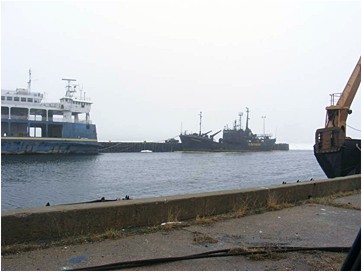 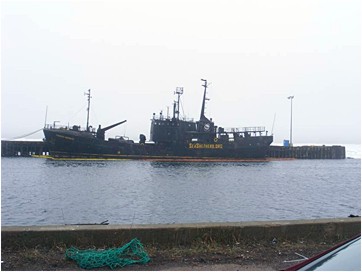 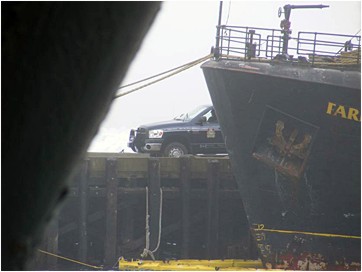 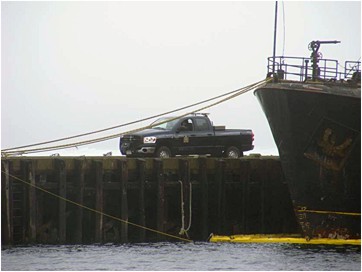