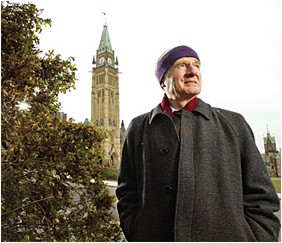 The former Liberal Party Minister of the Environment was a committed environmentalist and he had the courage to take stands on unpopular issues. He was outspoken in supporting me in opposing the aerial killing of wolves in Northern British Columbia in 1984 and he was opposed to whaling and sealing.
He is the only Canadian Federal Minister to ever set foot on a Sea Shepherd ship when he visited our ship the Sirenian in the early Nineties when we were docked in Vancouver.

He actually told me that I should get the Order of Canada but I was too much ahead of my time to get that recognition. Hearing that from him was worth more than actually getting the actual honour.

He was described in the Toronto Star today as:

The Former Liberal MP Charles Caccia was a gentleman, a supporter of social justice and, above all, an environmentalist.

Long before it was mainstream, he argued for fewer cars, cleaner air and more parks. He wasn't frightened of the big oil companies and even suggested the federal government cut back on what he thought were enormous subsidies.

Caccia, who represented the Toronto riding of Davenport between 1968 and 2004, suffered a stroke a week ago and had appeared to be recovering, but took a turn for the worse on the weekend. He died Saturday at age 78.

Born in Milan in 1930, Caccia was a professor of forestry at the University of Toronto and was well known for his strong pro-environment views.

During his 36 years in Parliament, Caccia served as minister of labour and of the environment, and Liberal critic on environmental issues.

Caccia was as far left as a Liberal could be - he supported Sheila Copps over Paul Martin in the 2003 leadership convention and opposed the invasion of Iraq - and wanted to ban cars from downtown while expanding public transit.

"Mr. Caccia was a great Liberal who dedicated his life to building a better Canada," said Liberal Leader Stéphane Dion.

Caccia remained active on environmental issues, serving as a senior fellow at the University of Ottawa Institute of the Environment and as president of the group Green Cross-Canada.

On behalf of the Sea Shepherd Conservation Society I would like to extend our sympathies to his family and to express our sadness at the loss of this great and distinguished public service of Canada.

In that Parliament of whores and charlatans, Caccia was a rare jewel, a man of integrity, courage and honour. The best they had or may ever have in those otherwise hypocritical chambers.