Medieval Justice for Dolphin Defender at the Cove

In Taiji this week, Dutch citizen Erwin Vermeulen was taken into custody by the Wakayama Prefecture police in Taiji. They have accused him of assault because an employee of the Dolphin Resort Hotel alleged that Erwin pushed him. Erwin denies this accusation and there are no witnesses to back up his accuser’s story.

In contrast to this, Cove Guardian Rosie Kunneke of South Africa was recently assaulted in front of witnesses by a Taiji fisherman. The man was merely questioned and released. Apparently in Japan there are double standards under the law depending on your race and citizenship.

Under Japanese law, Erwin can be held for up to 23 days. He is not allowed visitors and has not been given an opportunity yet to speak with the Dutch Embassy.

However, the police have said that they will release him within two days if he simply pleads guilty. 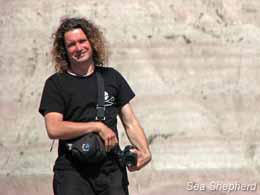 In Japan a person is guilty until proven innocent and conviction in Japanese courts runs around 98% success for the prosecution because most of these convictions are based on confessions secured during the 23 days the person is held for questioning. So the choice is really between being held for 23 days before given access to a lawyer and then formally charged to await a trial where there is a 98% chance of conviction, or pleading guilty. Therefore the logic is that it is better to plead guilty and display remorse for the “crime” rather than to defend your innocence.

It also appears that they singled out Erwin as a Dutch citizen because two of the Sea Shepherd ships are registered in the Netherlands and this is a signal to the Dutch to comply with Japanese demands to stop Sea Shepherd activities against Japanese illegal whaling operations in the Southern Ocean.

Erwin’s situation is not quite as drastic as having to drown to demonstrate innocence but the same type of authoritarian logic prevails. In other words regardless of the evidence or lack of evidence and based on the accusation of one person, Erwin can expect ”justice” only if he pleads guilty.

This of course will give the Japanese the proof they have been desperately trying to get that the Cove Guardians are a violent and criminal group.

Erwin has refused to speak with the police because he has been denied due process. As such he will be held for the “legal” duration that he can be held under Japanese law without formal charges.

In return for his compassion for the dolphins and his non-violent, legal opposition to the horrific slaughter of dolphins at Taiji, the Japanese police have decided it’s time to “get medieval” on the Cove Guardians.

Considering the cruel barbarity of the slaughter of the defenseless dolphins at Taiji, this is not surprising.