Maldives: The Next Atlantis?

In a meeting with Sea Shepherd Captain Lockhart MacLean and crew member/marine scientist Zoe Beckett, members of the Maldivian dive community voiced their concerns about the future of the Maldives environment and the need for the world to know about the issues facing this delicate and fragile eco-system.

For centuries the Maldivians have maintained a sustainable tuna fishery based on the traditional, dolphin safe pole and line method, UNTIL NOW.

Sea Shepherd has been informed that while maintaining the DOLPHIN SAFE logo on their tuna products, Maldives has allowed for longlining to start replacing pole and line, without rebranding the packaging to inform customers of this change in fishing methods.

Maldivian longliners are already searching for foreign companies to cooperate with them in this destructive venture.

In October, Maldives President Mohammed Nasheed approved a lease to Maldives star tennis player and developer Amir Mansoor. This lease, backed by the Ministry of Finance and the Department of National Planning, would allow for the building of a captive dolphinarium inside a lagoon, which would be sealed off from the surrounding waters. To appease local activists, Mr. Mansoor claimed the dolphins would not be local Maldivian species. They would instead be imported from overseas, opening the door to speculation on whether these would be Taiji dolphins. 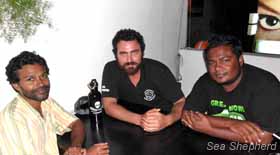 In an overtly corrupt fashion, Maldives National Planning Council has been awarding lucrative lagoon reclamation projects and leases, which replace marine habitat and reef systems with hotels and resorts, to well placed politicians such as the Chairman of the Ruling Party, Reeko Moosa Manik, and Sim Ibrahim Mohamed, the husband of Tourism Minister Mariyam Zulfa.

Furthermore, in a bid to increase profits, mangroves in northern Maldivian atolls are being destroyed to make way for sea cucumber farming planned for Chinese export.

A sensitive, shallow lagoon, currently a critical Manta Ray breeding ground, has been leased to sea cucumber farmers. Although approved, construction has not yet commenced. There is time to stop this!

These sea cucumber varieties are non-native, and apart from the obvious destruction of mangrove habitat (which is essential to maintaining healthy fish populations), there is lack of research on the impact of this intensive monoculture upon local biodiversity.

Another issue facing the Maldivian nation is coral mining for construction. This has been listed as one of the major contributing factors to reef destruction and in all likelihood is responsible for the island of Male, the capital of Maldives, slowly sinking under its own weight.

Could it be that the Maldives is the next Atlantis? An island paradise with bountiful resources, whose human population has been sustained for hundreds of years by the delicate balance it maintains with the marine life surrounding its 1900 atolls and islands, all destroyed in a few short decades due to greed and short-sightedness.

The two top contributors to the Maldives economy are Tourism (over 30%) and Fishing (around 10%).

The introduction of longlining last year in Maldives has made way for by-catch in the Tuna Fishery. Dive tourism in Maldives depends on sharks, rays and turtles, which are all vulnerable to by-catch. This industrial fishing method has outcompeted the traditional and more sustainable pole and line fishermen, who will have to convert to longlining to survive.

In a dangerous downward spiral of destruction, it looks as though the Maldives government is signing away their environmental legacy in the name of short-term economic gain and corrupt pocket-lining.

It is time for the international community and lovers of the sea to take action before the bounty and uniqueness of this island nation is lost.  In the words of Captain Paul Watson “extinction is forever.”

Please find below some information on the various environmental issues in the Maldives.

Some of the current petitions:

2. Reclamation of lagoons that would destroy several dive sites in the Maldives and cause the loss of the habitat of a number of mantas and other species

4. Aquaculture projects that threatens mangroves and habitats of species