In 1977, I founded the Sea Shepherd Conservation Society. I had an idea but not a penny to my name.

From 1974 until 1977, I had been working as a full-time volunteer for the Greenpeace Foundation, an organization that I co-founded in 1972. I had led the two Greenpeace seal campaigns to Labrador in 1976 and 1977, and had served as first officer on the Pacific whale campaigns against the Soviet whalers in 1976 and 1977. I lived on the boat or crashed at the Greenpeace office, so when I left Greenpeace in June 1977, I had no funds and no place to stay - just a passion to defend marine wildlife and my nautical skills and the experience that I earned as a Greenpeace director and activist.

I needed a ship and there was only one person who I could turn to for help. That was Cleveland Amory, the founder of the Fund for Animals. I approached Cleveland with an idea and he said, "Go and get your ship" and handed me $120,000 in cash. 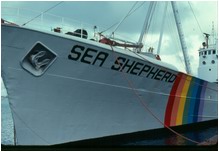 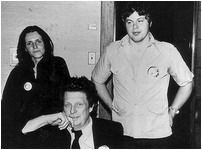 With that money, I located an old British trawler in October 1978 named the Westella and renamed her "Sea Shepherd." 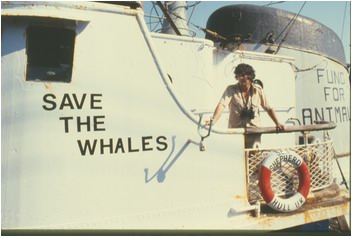 Captain Watson (pictured here) and Sea Shepherd pay homage to the Fund for Animals by painting the organization's name on the side of the vessel. 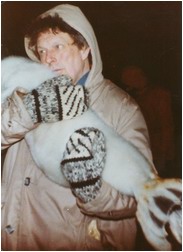 The first voyage of the Sea Shepherd was a team effort with the Fund for Animals and the Royal Society for the Prevention of Cruelty to Animals. It was the first ship to go to the seal hunt to defend seals and not to kill them. Cleveland joined me on the ship for the campaign. Me and eight of my crew were arrested after dying the pelts of over 1,000 whitecoat seal pups with an organic dye to destroy the economic value of their pelts. Cleveland followed our progress, supported us, and came to the courtroom the day of our hearing. 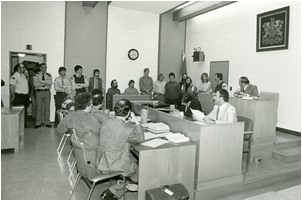 1979: Courtroom scene: Cleveland is sitting at the table (chair pushed slightly back, second from right) and Paul Watson is standing along the wall (5th person to the right of the Judge)


The Sea Shepherd was also the ship with which I hunted down, rammed and ended the career of the pirate whaler Sierra. It was the ship that established the Sea Shepherd Conservation Society. 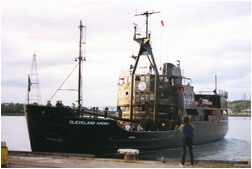 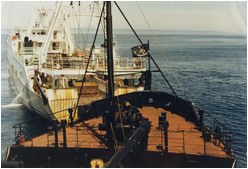 In 1993, Sea Shepherd named a ship in Cleveland Amory's honor, and it can be seen on the right chasing an illegal Spanish trawler off the Grand Banks (off the East Coast of Canada).

Without Cleveland, I could not have done it. He was my friend and mentor until his death in 1998.

That is why I am both thrilled and excited about the release of the book Making Burros Fly, a book about Cleveland Amory by Julie Hoffman Marshall.

Here is what the Publisher Johnson says about Making Burros Fly:People who knew Cleveland Amory say it would be impossible to forget him and his compassion for animals. He's remembered under many different banners and by many different people. He is the lovable old curmudgeon, the author of The Cat Who Came for Christmas, a man who evolved from writer to animal crusader.

It is under the animal crusader that Amory made his strongest impact-he created the Fund for Animals, an aggressive animal rights organization. And he was the first to use field agents to combat cruelty. In this exciting new book, Julie Marshall chronicles the rapid growth of the Fund. When it got started, the organization was crammed into a tiny New York office; it couldn't afford salaries for its full-time people, and people's garages were used as offices. As the Fund grew, Amory hired field agents in many states.

This books chronicles Amory's amazing "Army of the Kind"-airlifting 500 burros set to be slaughtered from the depths of the Grand Canyon, saving pigeons and rabbits, stalking hunters, "shooing" buffalo. Along the way, he created sanctuaries for animals to save them from abuse and neglect, establishing a network of foot soldiers for his "Army."

The Fund never grew to the size of an organization like PETA, but it was an extremely loud and irritating presence to anyone who tried to hurt animals.  From spray-painting baby seals in Canada to keep them from being slaughtered, to his plan to "hunt the hunters," Amory pushed every conceivable button he could to help every single animal he could.

Today, the Fund has been merged with the Humane Society of America to create a much larger organization.  But with the return of the baby seal hunt and the reemergence of fur as fashion, animal activists have just as much of a fight ahead of them as they did when Amory was making waves.  The story of the Fund for Animals relates how far we've come, and explores how far we need to go, and the type of personality, or personalities, that will be needed to accomplish our goals.

Julie Hoffman Marshall is an award-winning journalist and longtime advocate for wildlife, pets, and the environment in her native state of Colorado. She has worked as an associate editor of the editorial pages, a features writer, and as an animal columnist for The Daily Camera in Boulder, Colorado. She reported on community news for The Orange County Register in Southern California, and was a public information officer for the Colorado Division of Wildlife. Ms. Marshall holds a master's degree in journalism from the University of Colorado at Boulder. She lives in Lafayette, Colorado, with her husband Tim and daughter Sarah. The Marshall home is run by two Malamutes-Moqui and Nakuma-and four cats-Simba, Kato, Inspector Clouseau, and Yogi.