Stalemate and inaction are the rules of the day.

The amazing thing for me is that they actually let me into the hotel this year. Of course, I booked the room almost a year ago.

The Chilean Immigration authorities at Santiago airport had been alerted by the IWC to watch for me. Apparently my picture had been posted at the airport and the alert was out to intercept me upon arrival. Dr. Paul Spong by virtue of being a Canadian with the first name of Paul was singled out and questioned.

But as luck would have it I strolled up to the immigration officer just as they had a computer breakdown and they were not able to get any alerts on me and thus with a "thank-you, welcome to Chile," I was on my way to the Sheraton Hotel on the opening day of the IWC meeting.

I was fully expecting to be barred from entry at the hotel door as I was the year before in Anchorage when the Captain Cook hotel refused to let me in the door at the request of the Japanese government who declared me a terrorist for opposing their illegal whaling activities.

Instead the management of the Sheraton were more than friendly and upgraded me to a $500 a night suite although I was paying the lowest advanced rate possible. There is a possibility that they confused me with Paul Watson the internationally renowned war correspondent.

But I was getting the looks, especially from the Japanese delegates although my presence was tolerated.

Bill Hogarth, the Chairman of the IWC himself came up to me in the lobby, shook my hand and said he was happy to see me attending.

Meanwhile little 15 year old Skye Bortoli of Australian Teens Against Whaling was being shadowed by plain clothes security guards because someone had tipped them off that she was somewhat of a budding eco-terrorist.

Skye had an opportunity to address the IWC delegates as the representative of the NGO's attending the meeting and as a teenager she would have been perfect to speak of the concerns of her generation. Unfortunately politics interfered and the chosen speaker was from Greenpeace to speak on the distracting issue of whalers stealing whale meat from the factory ship Nisshin Maru. What this has to do with Japan illegally slaughtering whales in the Southern Ocean Whale Sanctuary is a mystery.

I went outside the hotel to do an interview with a Japanese media crew as Chilean anti-whaling protestors were being hauled away by the police for attempting to storm the police lines to enter the hotel.

"It's like a living dead gathering," said Dave Rastovich of Surfers for Cetaceans commenting on the boring monotonous ramblings of Japanese bought and paid for puppet nations.

Skye Bortoli of Teens Against Whaling described the meeting this year as "pathetic, saying "this body will be known in the future as a small group of ecologically arrogant people who are condemning the world's whales to agony and oblivion for petty politics and a few lousy bucks."

Hannah Fraser a professional mermaid from Australia described the meeting as having to endure, "disappointingly banal rhetoric."

There were many things that could come out of this meeting. Japan could withdraw from the IWC and become a renegade whaling nation along with their partners in conservation crime Norway and Iceland. Or a compromise may be brokered that will allow the Japanese to withdraw from the Southern Ocean without losing face or thirdly and most likely nothing will come out of this meeting at all.

Australian Environment Minister Peter Garrett was deaf to the screaming of the whales and somewhat vague about Australia's position but he was exemplary as a politician. He apparently has mastered how to use the maximum number of words to say the least about anything.

Smoke and mirrors were the order of the day for so called pro-whale nations. Hasn't anyone from any of the so called pro-whale, pro-conservation nations any guts? Why are they all kow-towing to Japan like a bunch of sycophantic vassal states?

From the way things are going so far it looks like Sea Shepherd will be returning to the Southern Ocean to once again enforce the regulations that the IWC and the nations of the world refuse to uphold.

Most likely the one thing the IWC will agree on again is to condemn the Sea Shepherd Conservation Society's direct action campaigns against illegal whaling.

Oh well, I come to these meetings with no expectations hoping to be pleasantly surprised.  After more than three decades I am still waiting. 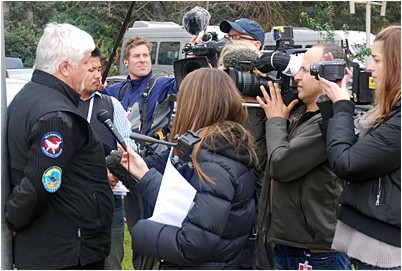 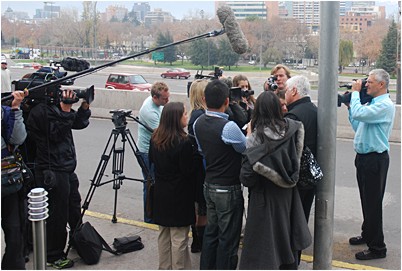 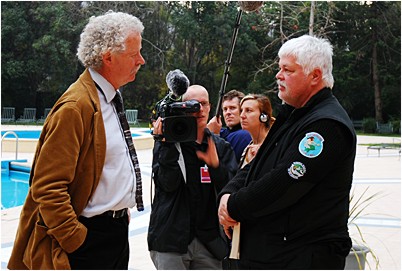 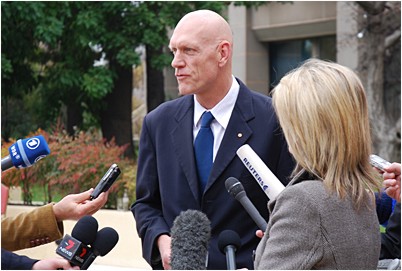 Peter Garrett, Australia's Minister of the Environment,
Heritage and the Arts, talks to the press.