Japanese Whalers are Crooks? Who would have thought?

Japanese Whalers are Crooks? Who would have thought?

The Greenpeace Foundation held a media conference in Japan today to expose the fact that workers on the Japanese factory ship Nisshin Maru were smuggling whale meat home and selling it on the side.

The headline was: Harpooned: Greenpeace exposes scandal at heart of whaling

Greenpeace intercepted a box of whale meat weighing 23.5 kilos that was labeled as containing cardboard and said that more than a ton of the best cuts of whale meat had been stolen by workers on the ship right under the noses of the whaling company.

Not that it really matters. We don't consider it a scandal because some whalers are making money on the side. The whales are dead, killed illegally and that is the real scandal. Where the money goes, into the hands of the company or into the pockets of the killers is irrelevant.

But why would Greenpeace be so surprised. The Japanese whaling industry has been controlled by the Yakusa (The Japanese mafia) for years. The union that supplies the crew is a Yakusa Union. Now what kind of tattooed self-respecting gangsters would they be if they were not pilfering from the company and ripping off the government?

Greenpeace was asking how could this theft take place without anyone noticing? Of course they noticed, but obviously the Japanese Yakusa made the company an offer they could not refuse, like the Japanese equivalent of "forget about it."

Greenpeace describes this as a "major conspiracy of corruption at the heart of Japan's government-backed, sham scientific whaling operation."

I guess we can add it to the long list of major conspiracies at the heart of Japan's government like the rape of Nanking that apparently did not happen and "dolphins, what dolphins are being killed in Taiji?"
I think it's a major conspiracy in the heart of Greenpeace Japan that they ignore the slaughter of 22,000 dolphins every year on Japanese beaches.

According to Greenpeace they have exposed widespread embezzlement of whale meat and it has been occurring for decades under the noses of public officials. Duh, you think?

Of course it has. The Japanese whaling industry is, and always has been a criminal operation run by criminals in a country where politicians are routinely bought. The Japanese Diet is a Parliament of whore and that should not surprise anyone.

Not that they are any different than the Canadian or Norwegian Parliaments where whalers and sealers call the shots like elected officials.

Greenpeace has called for the government of Japan to withdraw the license of Kyodo Senpaku to kill whales. We won't be holding our breath on that one.

Greenpeace also exposed the following scandals at their media conference;

The Sea Shepherd Conservation Society could not care less about the harsh working conditions of the Japanese whalers. The harsher the better, as far as we are concerned. Any person who makes a living from the criminal slaughter of whales is undeserving of sympathy. They choose to work in those conditions.
The other charges were already known so nothing new here.

However it is a good thing that Greenpeace held this media conference. Anything that keeps the issue alive in the Japanese and world media is okay by us.

But we should not be so naïve as to be shocked by charges of criminality by the whalers. We know they are criminals and they are doing what criminals do.

The real crime is that they are targeting endangered and protected whales in an international whale sanctuary in violation of a global moratorium on whaling. Everything else is minor in comparison.

Sidenotes: Earlier this year, the Asahi Shimbun newspaper reported that the whalers were struggling to pay back $1 billion Yen in borrowed public funds. With a massive 4,000 tonne stockpile of unconsumed whalemeat and Asahi Shimbun reports of consumer disinterest in "bloody drippings", the whalers seem to be onto a sure loser. To make matters worse, the annual increase in targeted Southern Ocean whales means that supply is already outstripping demand, a situation "unthinkable for an ordinary business entity" according to the accountant of a major audit corporation quoted by the Asahi Shimbun. 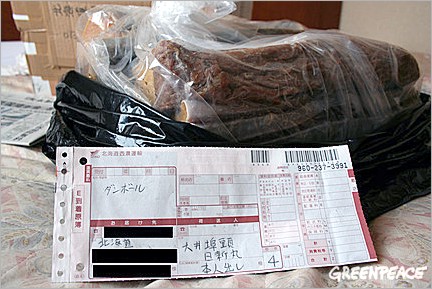 Consignment sheet detailing, in Japanese, the contents of a crewmembers' personal box
offloaded from the whaling factory ship Nisshin Maru, containing 23.5 kilograms of stolen whale meat.
The sheet lists the contents of the box as "cardboard."  Photo: Greenpeace 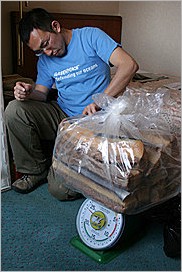