IWC Wipes Out In Chile

IWC Wipes Out In Chile

Report on the 60th Annual Meeting of the International Whaling Commission

It has been a very strange week at the Sheraton Hotel in Santiago where 72 of the 81 nation members of the International Whaling Commission have been meeting all week to essentially not resolve anything at all.

The amount of carbon expended on airfares alone without any results to show for it is a crime in itself.

Japan has had the IWC in a stranglehold for two decades as this criminal whaling nation continues to violate IWC regulations, continues to bribe nations to support their positions and continues to pontificate on their eco-imperialist campaign to slaughter the world's whales in complete disregard for the concerns of the civilized world.

Outside the hotel young Chileans demonstrate, lock themselves to the hotel door and are routinely arrested while most of the delegates are completely oblivious to their actions. The IWC delegates seem to exist in a fantasy world of their own creation where they are bending over backwards to be polite to each other as Japan manipulates the agenda so that nothing can, or is being done at all to end their high seas serial killing spree against the Cetacean Nations. They talk using the maximum number of words to essentially say nothing at all.

The IWC is not even voting on anything this year. Japan reasons that if there are no votes than they won't have to return to Japan having lost any of the resolutions. So the delegates decided to an informal agreement to not vote on any controversial issues and to avoid any confrontations. It's a strange way to resolve conflicts and an even stranger way to enforce the regulations of the IWC. Not one of these losers wants to appear to be a loser. They would rather that the whales lose their lives to the outlaw harpoons. So for the first time the annual verbal slug fest became a love fest with everyone pretending to respect each other's positions or as Australian Prime Minister Kevin Rudd recently said to Japan's Prime Minister Fukuda, "we have agreed to disagree."

Denmark however decided to force a vote on their proposal to slaughter more endangered Humpbacks in Greenland in addition to the whales they already kill, despite the European Community's adamant (and except for Denmark,) unanimous decision to stand strong for the whales. Denmark's proposal was quickly shot down with evidence that their so-called indigenous slaughter of whales is in fact a commercial operation. The Danes with less political savvy than the Japanese were defeated 36 to 29 although the USA voted for the deaths of the Humpbacks probably in deference to the desires of the Makah Indians of Washington State to resume the murder of the whales.

What sums up the hypocrisy and the ineffectiveness of the IWC for me is that the Sea Shepherd Conservation Society is the only organization that upholds the regulations of the IWC and we are the only organization that is banned from attending the IWC yet Japan, Norway and Iceland blatantly violate the rulings with contempt yet are never admonished for doing so and are allowed to perpetuate their whaling crimes year after year in the name of their bogus research. The real research that Japan is undertaking is to determine the limits of Japanese bullshit that the other member nations can swallow.

The only real voice for the whales is coming, as usual, from individuals and small organizations. Skye Bortoli with Teens Against Whaling although only 15 years old has had security agents stalking her every move. Hannah a professional mermaid baffled the security when she attended a media conference wearing her tail. They detailed extra men to surround the swimming pool to ensure she did not get close enough to dive in. Apparently the image of a mermaid protesting the killing of whales from the middle of the pool had spooked the Japanese. It was probably for the best for Hannah, she may have been harpooned. The Japanese seem to be possessed with killing any intelligent aquatic citizen with a tail fluke.

At high noon on the last day of the conference, four Chilean protestors jumped out of a cab and stormed the door of the hotel bringing their very vocal protests directly to the lobby of the Sheraton for the first time. The Chilean police quickly removed them and hauled them off in handcuffs. What a difference it would make if even a small fraction of the passion that we see on the outside of the hotel could be brought inside the doors to challenge the Japanese killers on the floor.

The Chileans have displayed a strong show of support for the whales ranging from in the street protests to the declaration by President Michelle Bachelet of the establishment of the Chilean Whale Sanctuary to protect all whales in the Chilean Economic Exclusion Zone (EEZ).

Dave Rastovich had come from Australia to rally the Chilean surfing community and has taken the leading rope in recruiting surfers to the defense of the dolphins and the whales.

Japan once again called for the condemnation of the Sea Shepherd Conservation Society for our interventions against their illegal whaling operations. Brazil, the USA, the Netherlands, India, Mexico, New Zealand, Australia responded with statements that did not say much at all except that they were opposed to "violence and unlawful acts" at sea.

The Institute of Cetacean Research (ICR) said today that the IWC member states must actually take demonstratable action in maintaining the safety of lives at sea.

"The IWC resolution on safety at sea must be followed up with decisive action - especially by the country providing the flag that allows Sea Shepherd vessels to commit illegal and life-endangering actions in the Antarctic," said Dr. Minoru Morimoto, the Director General of the ICR.

"All flag and port states must take responsibility for enforcing international safety regulations and demonstrate tangible results to ensure the safety of workers at sea.

"Flag states should decline to register any Sea Shepherd vessels and, in addition, port states must deny access to ports when they are used by this group to launch violent attacks in the Antarctic.

"Furthermore, countries in which these organizations are headquartered, and from where their members conspire to carry out criminal acts, must bring these perpetrators to justice," Mr. Morimoto said.

"The ICR supports the rights of people to peaceful protest. However, it has been clearly demonstrated over years that the actions of Sea Shepherd are far beyond peaceful. Over the 2007/2008 research season in the Antarctic, the ICR was required to defend its research vessels against increasingly violent attacks.

"In the absence of these flag and protest states taking responsibility, the ICR supports initiatives by the Government of Japan to protect its vessels by all means possible," Mr. Morimoto said.

The Sea Shepherd Conservation Society is also opposed to violence and unlawful acts at sea, especially the violence of the whalers against our crews and especially against the whales so we agreed that violent actions at sea should be stopped - by the Japanese who fire guns, hurl concussion grenades and ram our ships.

The Sea Shepherd Conservation Society by contrast has not used firearms, has not injured any person and has never rammed a Japanese whaling ship. The most "violent" thing we've done is to save the lives of over a thousand whales by aggressively but non-violently intervening against the violent and illegal killing of whales by the Japanese whalers.

None of the nations defending the whales have indicated that they take Japan's "call to action" seriously.

"We take it as a somewhat amusing joke," said one official delegate. "You can't quote me on this using my name but quite frankly, the Japanese are full of crap and they are not fooling anyone."

The Netherlands has already sent a letter of protest to Japan for their actions last season in the Southern Ocean and Japanese fishing activities have been curtailed in U.S. waters since 1988 in retaliation for Japan's on-going violations of IWC regulations protecting the whales.

This annual whaling commission charade has been going on for 60 years and has become a regular vacation opportunity for many of the delegates, especially the nations that have sold their vote to Japan. They get to travel to a different location each year, stay at five star hotels, eat expensive meals and all they have to do is to pretend they are making a difference. Japan pays all the expenses - it's a great gig if you're a politicians from some puny nation that has never even see a whale and wouldn't recognize one if they did. But hey, Chilean wine is superb and the Chilean farm raised salmon is something to literally die for. A little mercury never hurt anyone, just ask the brain damaged citizens of Taiji where mercury has made swiss cheese of their grey matter.

The only serious suggestion with any merit to emerge from this year's meeting came from former Australian Environment Minister Ian Campbell who said that it is ridiculous for the "Japanese to be calling for the "normalization" of what has become a very abnormal organization. All we need to do is to drop the "ing" from the International Whal(ing) Commission and convert it into what it should naturally evolve to be - a whale conservation organization."

Ian Campbell who previously came to the IWC meeting to represent Australia had been the most passionate and out-spoken defender of whales and is the reason today that Australia holds the leading position of whale defending nation.

"I was once an activist Environmental Minister," said the Honourable Mr. Campbell. "Now I am just an activist."

So with nothing much worthwhile accomplished the delegates are already thinking of the sunny beaches and excellent wine of the Portuguese island of Madeira where the 61st meeting of the IWC is scheduled for 2009.

The Sea Shepherd Conservation Society intends to return to the IWC again with even more victories at sea and lives saved from the ruthless killers of the most gentle, intelligent  and socially complex sentient beings in the sea.

Between now and then we intend to rock the boat and battle it out like samurai in the most remote and harsh waters on the planet with an international crew of volunteers ready and willing to risk their lives in Operation Musashi to defend endangered whales in the Southern Ocean Whale Sanctuary.
We intend to sink the Japanese whaling fleet - economically and we intend to save as many whales from their horrifically cruel harpoons that we can.

We intend to stop them!

Looney Highlights of the 60th Anniversary of the IWC

Russian Commissioner Fails History in Defense of Bogus Science
After congratulating Japan for its "stellar service" to Science Russian Commissioner Ilyashenko's recalled the fate of Copernicus. In Russia's account, the great scientist was put to death by Jesuits for refusing to withdraw his outrageous claim that the Earth revolves around the Sun. The death scene was a traditional burning at the stake, with a mob surrounding the fire, cheering and jeering. In a marvelous conclusion, which brought down the house, the crowd in Commissioner Ilyashenko's story was the forerunner to today's NGOs!
It turns out that Copernicus actually died of a stroke in 1543, and was never persecuted by the Church. His science was not published until after his death.

St. Kitts responded to the European Union's opposition for Greenland to kill endangered Humpbacks by charging that this was an attempt by a small group of nations, trying to be world leaders, who were denying marginal people the right to eat though a "blatant act of aggression".

Of course the European nations are already world leaders whereas St. Kitt's certainly is not although they act like they are, and Greenland being part of Denmark a socialist state, means that no one will be starving because they can't harpoon a Humpback for the Japanese market. 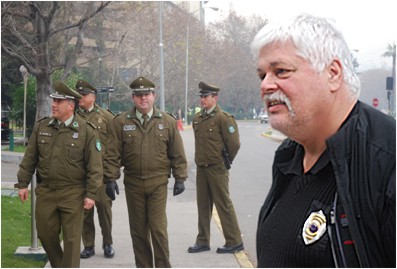