Impressions on the Bonneville Dam

"At least 76 fish wheels were operating along the Columbia River by the turn of the century. The fish apparatus would run from dawn until dusk every day from spring through the fall salmon runs.

"Canneries would pack 1000 one-pound cans of salmon daily and by the 1880’s, with the advent of refrigerated rail cars, fresh iced salmon could be shipped east along the newly completed Northern Pacific Railroad transcontinental line.” 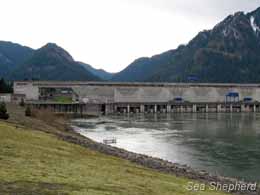 According to the information at the visitor centre, 200 years ago 12 million salmon (each year) would pass through the area, which is now the Bonneville dam; today less than a million pass.

The US Fish & Wildlife Service sums it up this way:

“America’s pristine waters once supported plentiful and robust fisheries. Our Nation’s national treasures appeared to be abundant without end. The United States fueled the industrial revolution with resources of water, timber, minerals, and wildlife. Then the fish began to disappear…”

It is not only the fisheries that decimated the salmon population. Habitat alterations, irrigation, silt, pesticides, fertilizer, chemicals, sewage, livestock, non-native species, and fish farming all had their impact; an all-human impact.

The sea lions are not responsible for the decline of the salmon. In 1805 Lewis and Clark encountered harbor seals and possibly sea lions near Celilo Falls on the Columbia River. Where the predators used the bottleneck of the falls to catch their share of salmon then, they use the bottleneck of the fish ladders at the dam now to do the same. A balance that we humans have destroyed.

Killing sea lions to protect salmon is an injustice towards the sea lions. The figures provided by scientists show that the impact of sea lions on the returning salmon is small compared to that of the fisheries and the dam itself. 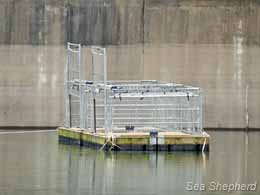 At the dam there were only a few Steelhead trout in the fish ladder when we visited. The spring Chinook salmon run is expected to start in the next few weeks. We saw a California sea lion and a Steller sea lion at the dam.  An employee of the US Department of Agriculture was carrying out hazing with rubber bullets and firecrackers. According to the USDA employee there were only three to four Californian sea lions at the dam at this moment and a few Steller sea lion, which being legally protected, are not included in the intended cull. He expects the sea lion numbers to increase when the salmon run starts. A troubling sight was that the traps are in place. With these traps the sea lions will be caught and this capture might lead to euthanasia.

As Sea Shepherd’s Director of Investigations and Intelligence Scott West said last week: “We have experience with documenting senseless slaughter.  Perhaps we will need to institute a “Dam Guardian” campaign at the Bonneville Dam.  How many volunteers would be willing to come to the dam and help?  Stay tuned.”