I’m Not Ready to Make Nice

I'm Not Ready to Make Nice

As the Dixie Chicks said, "I'm not ready to make nice."

I have no apologies for defending the seals from their killers. Bullies are notorious for whining like victims when the tables are turned.

Apparently, the sealers and the Canadian government are upset with me for making the following statement:

"One of the sealers was quoted as saying that he felt absolutely helpless as he watched the boat sink with sealers onboard," said Captain Paul Watson. "I can't think of anything that defines helplessness and fear more than a seal pup on the ice that can't swim or escape as it is approached by some cigarette smoking ape with a club. This is a seal nursery and these men are sadistic baby killers and that might offend some people but it is the unvarnished truth - they are vicious killers who are now pleading for sympathy because some of their own died while engaged in a viciously brutal activity."

I've been asked to apologize, and I've been accused of being insensitive. A reporter from Halifax who I spoke with today was very angry and kept asking me how I dared to equate the lives of humans with the lives of seals. "These are animals," he said. "Yes, and from what I remember from my biology classes, we are animals also," I replied.

By attacking and trivializing the memory of these men who tragically lost their lives, Mr. Watson has proven to the world that he is gutless, shameless, and has not one shred of human decency. His lust for media coverage knows no bounds.

On behalf of the Government of Canada, I want to once again express our condolences to the family and loved ones of these sealers.

Our government has said that it will stand up for the safety and security of sealers, and I want to confirm that the militant actions of the Sea Shepherd Society have not gone unnoticed are currently under investigation.

It is difficult to seriously accept criticisms of insensitivity from men who bash in the skulls of baby seals, and I have to say that the opinion of Canada's Minister of Fisheries means very little to me. After all I did not kill those men - the Canadian government did.

It was Hearn who authorized the use of unsafe vessels to kill seals. It was his government's direct incompetence that resulted in the deaths of the four sealers. So Hearn's statement about standing up for the safety and security of the sealers is hollow to say the least.

When did documenting the slaughter of seals become a militant action?

I do not trivialize the death of these men by saying that the slaughter of hundreds of thousands of sentient beings is a greater tragedy. I deplore the fact that government incompetence resulted in the death of four sealers, but it is the same incompetence that has resulted in the collapse of the fisheries, and it is Hearn's political ambitions that continue to support and subsidize an industry that has no place in the 21st Century.

If expressing condolences to the families of the sealers helps Hearn to sleep at night, then so be it. The fact is that these men died because of the government of Canada, and I expect and anticipate that it will attempt to make Sea Shepherd the scapegoat for its incompetence.

The oldest political trick in the book is to deflect criticism by focusing hatred onto another party. Hitler did it with the Jews, and Hearn is trying to do the same with us.

This is not anything new. The Canadian government has been using seal defenders as a distraction for years. By getting east coast fishermen to hate environmentalists and animal defenders, it can reduce criticism of the notorious management problems that caused the total collapse of the cod fishery.

I find it amusing that the sealers expect me to be "sensitive" to their feelings. This bunch of men on the Magdalen Islands beat the crap out of me in 1995. Thirty of them jumped me in my hotel room, but then that is to be expected from bullies. I did manage to take two of them down with a stun gun before falling before their fists and boots, but that day I was very "sensitive" to their feelings--I felt every blow.

In 2005, the sealers attacked and assaulted my crew on the ice, striking them with sealing clubs, destroying cameras and spilling our blood onto the ice. Not one of them was charged, despite the entire assault being documented on camera, because the Royal Canadian Mounted Police said that we had "provoked" them by opposing their killing of seals.

Today I received the following message from a man who described himself as a Newfoundland sealer:

I was appalled by your lack of sympathy for the loss of the human lives last week as those sealers lost everything when they drowned in those frigid waters!!

Environmentalists like you make me sick!! Your total lack of respect for human life and your overly protective attitude towards animals is indicative of how extremists like you want to control things. I am a well educated man from Newfoundland currently living in Atlantic Canada and I support the seal hunt, I support the seal fur trade!! There is no greater pleasure than clubbing a baby seal and feeling that skull collapsing and watching them trying to crawl away and then smacking the little shits again. It ideally should be accomplished in one blow but sometimes it takes two or even three!! Hey all the little bastards do is eat fish and defecate so we are getting rid of animals that do more to destroy ecosystems of fish than are actually contributing to more stable ecosystems. Besides seal meat tastes great and the fur is warm. Baby seal meat is exceptionally good!!

You're no better than the animals you protect and I for one will never support any organization which you are affiliated with.

Good day to you "Mr." Watson

I especially like the compliment that he gave me with the last line. That is the entire point. We are no better than the animals, and their lives do count, and I have no apologies for saying that the slaughter of 325,000 seals is a greater tragedy than the deaths of four seal killers.

I did not say that their death was not a tragedy. Of course it is, and the government of Canada should answer for it, but it must be remembered that the 325,000 seal pups are innocent sentient beings minding their own business, helpless on the ice, new to the world, viciously assaulted, clubbed, shot, skinned alive in some cases, kicked, and slashed.

The men who died chose to be out on the ice in inferior vessels. They made the choice to be sadistic killers. Was I being insensitive to the families of the men with that statement? Possibly so, but then I have seen a mother seal grieving for days over the skinned frozen carcass of her pup. I have seen mother seals attempt to nurse their dead baby, and none of these images have caused the sealers to feel any pity or remorse.

I have been accused of not being sensitive to the way of life of fishing families, yet I was raised in an east coast Canadian fishing village myself, and as a child, I bore witness to the brutality of fishermen killing seals, shooting at dolphins and whales, torturing sea birds, and tossing garbage and oil into the sea. I don't respect commercial fishermen in general, because I have seen first hand what they have done, and I have witnessed their incredible arrogance in believing they have the right to do whatever they wish, whenever they wish, to any creature they wish.

Yes, I am sure there are a few exceptions, but generally, commercial fishermen are an ecological menace. The oceans of the world have been systematically devastated over the last few generations, and both life and diversity have been greatly diminished. We are now fighting last stands against poachers in marine reserves, national parks, international sanctuaries, and World Heritage sites. And we are losing. The onslaught of humanity--with such vast numbers, such voracious appetites, such efficient technology, and such vicious ruthlessness--coupled with overall human apathy is destroying the very planet upon which we live. So it is hard for me to be "sensitive" to the feelings of fishermen just because four of them died while raping the sea.

We at Sea Shepherd merely report on what we see, and during the last week we have seen and video-taped a seal pup being skinned alive. We have seen seal pups thrashing about in agony on the ice as their blood is splattered across the floes with every convulsion of their young bodies. We have seen a seal pup trying to escape its killer with an eyeball dangling from its socket, trailing a stream of blood, searching desperately for protection or a place to run to. Unable to swim, unable to escape, unable to defend itself--this is the very definition of helplessness.

During the years that I have traveled to the ice floes, I have noticed that all of these baby seals have different personalities. They display curiosity, they express fear, some are docile, and others very animated. They are individual sentient beings, and their lives are as sacred--as meaningful and as important as ours.

Humans forget that without diversity we could not survive. We ignore the fact that our voracious appetites have cut a swath of death and destruction throughout the oceans, from which they will never recover. Every commercial fishery is in a state of collapse. More marine mammals are going extinct and will go extinct in our generation than we have lost since the Jurassic period some sixty-five million years ago.

A report said today that I should issue an apology to the sealers for equating their lives with those of the seals.

I have acknowledged that the loss of the four sealers from the Magdalen Islands is a tragedy. But I insist that the cruel and remorseless on-going slaughter of 325,000 seals is a greater tragedy.

This is not a seal "hunt." There is no stalking, no outwitting of the prey, no danger from the animal, and no challenge in shooting and clubbing seal pups that can't escape or swim. This is a cold and merciless slaughter that has no place in the civilized world. 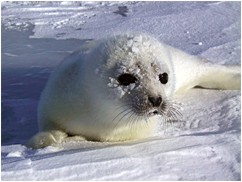