I walked into the lobby of the Hotel Captain Cook in Anchorage and was greeted with hugs by the Australian Teens Against Whaling. I spent about twenty minutes talking with Skye Bortoli, who with her sister and friends, had come all the way from Australia to appeal to Japan to not slaughter the humpback whale. 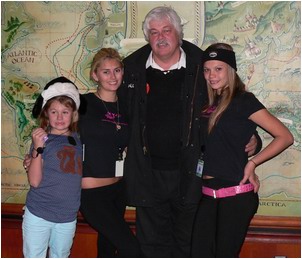 As we were talking, a serious-looking man in a suit approached me. He was accompanied by a number of Anchorage police officers. They asked me to step outside and then informed me that the Captain Cook Hotel would charge me with criminal trespass if I step foot in the hotel again. I was informed that the Captain Cook Hotel did not welcome certain opponents of Japanese whaling operations.

As I left the hotel, a man suddenly aimed a camera at me and began taking pictures then disappeared quickly around the corner and jumped into a red unmarked police car and sped away. 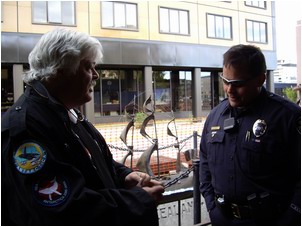 Then two uniformed Anchorage police officers approached me on the sidewalk and asked  what my intentions were. I said that my and Sea Shepherd's intentions were to enforce international conservation law against illegal whaling activities.

I also assured them that Sea Shepherd was not a protest organization and had no intention of disrupting the IWC meeting or breaking any laws. "We fight the Japanese criminal whaling activities on the high seas," I said. "Not here."

Sea Shepherd's primary purpose in being in Anchorage is to respond to Japanese propaganda and the proposed Japanese resolution to have Sea Shepherd Conservation Society condemned by the International Whaling Commission (IWC).

Sea Shepherd is not concerned about any IWC resolution condemning Sea Shepherd as the organization has already been barred from attending the IWC meetings since 1987 after enforcing the IWC global moratorium on commercial whaling by sinking half the Icelandic whaling fleet in 1986. After being banned for two decades, a resolution proposed by Japan to condemn Sea Shepherd will not make any difference.

"We are quite frankly proud to be the mavericks, the renegades, and the outsiders," I commented. "Sea Shepherd activists are the ‘ladies of the night' of this movement. Many of the delegates inside agree with us and support us quietly and behind closed doors, but are afraid to be seen with us in public during the light of day."

At yesterday's meeting Japan attempted to blackmail the Commission by saying that they would take the 50 humpback whales off the kill list if the IWC allows the resumption of commercial whaling by Japan.

Australian Green Party leader Bob Brown said Japan's demand that Australia accept the killing of whales in the North Pacific in exchange for saving the humpbacks was Mafia-style blackmail. He said Australian Environment Minister Malcolm Turnbull "should reject it out of hand and raise the threat of global ostracism of Japan."

Glenn Inwood, a spokesman for Japan's Institute of Cetacean Research, said that if New Zealand and Australia wanted to save the 50 humpbacks they must support Japan's coastal whaling plan. "This comes down to a very simple question: how much do Australia and New Zealand want to protect those humpbacks?" Mr. Inwood asked. "Japan is prepared to compromise."

Mr. Turnbull said Australia had an excellent relationship with Japan, but would not support its slaughtering of humpback whales. "If Japan values the strong friendship and goodwill of the people of Australia, it should drop the humpbacks from its proposed scientific whaling program," Mr. Turnbull said.

The Hotel Captain Cook advertises itself as the "the recipient of Preferred Hotel's 2004 Hotel of the Year/Best Service award. And they state that people can expect exceptional, genuine Alaskan, and service-minded hospitality."

When I asked if the management of the Hotel Captain Cook were concerned about how they would be viewed for barring people who defend whales from their establishment, the head of security stated that he was unconcerned and that his orders were to use force if required to prevent any Sea Shepherd members from entering the hotel - this means any people who identify themselves or are identified as Sea Shepherd supporters. According to the security officer, that means that any of our thousands of supporters could be arrested or thrown out of their hotel for wearing a Sea Shepherd shirt, baseball cap, or for identifying themselves as Sea Shepherd members or supporters.

If you are a Sea Shepherd supporter and/or a defender of whales, please consider taking a moment to send a polite comment/request to the hotel at the website address below:

Japan has certainly flexed its muscles to insure that no dissenting opinions will be heard. However, Sea Shepherd will not let a powerful country stop us from our duty to speak out for the voiceless and defenseless whales.