Ocean Defenders Alliance (ODA) concluded this year's Earth Day weekend with an unusual catch.  We have been removing abandoned traps and nets from Southern California for 5 years, but one net in particular was our biggest test to date.  We received a report from some local divers back in December, 2007, that there was a large net on a wreck site, six miles off the coast of San Pedro.

The site is called the Fog Wreck.  It is a small wreck, maybe 50 feet long.  It is in very deep water, at 100 feet.  When our divers first investigated it, they discovered there was a huge net smothering it.  The net was a purse seine net, made of rope and steel cable.  These nets can cause incredible damage by killing and maiming any animal that is unfortunate enough to come in contact with it.  When storms visit our area, the surge moves the net back and forth over the wreck in a scouring effect that wipes out all the life forms that come in contact with it.  In addition, seals, fish and diving birds can get entangled in the net and die while struggling to break free.  Our divers freed several fish over the course of our dives, and we were getting reports of other divers freeing fish as well.

At 100 feet deep, divers only have about 18 minutes to descend, locate the site and start working.  In addition the water has been very cold this winter, hovering in the 52-54 degree range for months.  Most of the divers have dry suits, but the cold still numbs the body and brain.  With this in mind, we took every precaution to assure all dives were done with safety as the number one goal.  We never asked anyone to do anything they were not comfortable with.

For four months we encountered an array of weather and visibility.  Since we are an all volunteer organization, we were only able to dive on the weekends.  January's dives were spent trying to pull the net off the wreck, no small feat due to all the debris from the wreck that the net was caught on.  Several local divers helped us by cutting one section of the net and ODA hauled it out.  It was only 1/5th of the net, but we got it!

February brought us storms and visibility so bad we had to call off one day of diving after the divers ran into the wreck with their masks.  Another day of diving gave us an encounter with a huge pod of dolphins, with several of them diving to 100 feet to check out what those strange creatures with tanks on their backs were up to.

In March we made real progress when we got the net completely off the wreck, rolled it into a bundle, but had to leave it for another day due to the divers being maxed out on their dive tables.  The next time we returned, the storms had pushed the net back onto the wreck....so it was back to square one. 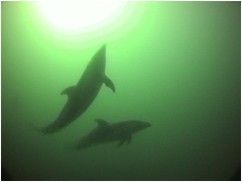 Then in early April we got it back off the wreck, tied into a bundle and started to haul it out.  We were using our boat anchor winch to pull it up.  Next thing you know, I heard a loud snap.  The haul line broke from all the weight!  With the divers again maxed out on their bottom time, back to port we went.

Finally on Earth Day weekend, we went out one more time to remove the net that didn't want to cooperate.  On Sunday the 27th, as the divers entered the water, the current was so strong that when they jumped in from the deck of the boat, by the time they had surfaced they were 10 feet down stream from where they entered.  We had to have someone on deck with a rope pull them alongside the boat up to the anchor line where they could descend.  Down they went, but when they surfaced they were 200 feet away and could not make it back to the boat.  We pulled up anchor and retrieved them.

The second dive turned out to be the lucky charm.  They hooked up the haul line to the bundled net, surfaced and then we started hauling it in.  This time the larger haul line did the trick.  Soon we had the entire mess on the deck, with nothing but a stinking net and smiles all around!   The net was so large we had to cut it into several pieces to be able to move it off the boat.  I estimate it weighed between 300 to 400 pounds.

I'd like to bring home two points: one, think global (Sea Shepherd) and act local (ODA).  Two, once you start something, see it through.  The rewards far outweigh the setbacks.  The animals of the underwater world need all the help we can give them.

Happy Earth Day to all my friends: the fish, sea lions, dolphins and gorgonians.  They are not only vital to a healthy ecosystem, they nourish the soul.  Get out there and dive, don't miss out on one of life's treasures. 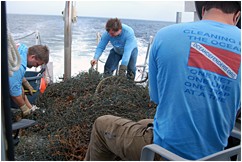 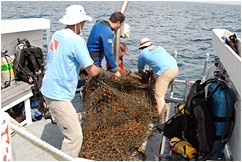 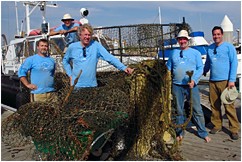