The EU has all the rules and regulations that protect our oceans, however, what they do not have is enforcement. We have a lack of will on the part of governments to enforce international conservation law. They need to get out there and arrest the bastards. But, they are doing this because too much money is passing hands under the table going to many politicians in Europe, just like in Malta; there is no question that Maltese politicians are on the take.

This is the story in the March 6th Edition of the Malta:

Gonzi was replying to a parliamentary question forwarded by Nationalist backbencher Jesmond Mugliett in regards to an interview that was published in the magazine about Malta's tuna fishing industry.

In an interview published last month, Sea Shepherd founder Paul Watson was quoted as saying "what is happening in Malta is that there is a whole illegal enterprise going on there with the full support of the politicians who are being bribed by these tuna fishermen."

Mugliett asked whether libel proceeding will be undertaken by the government and the Prime Minister replied in the affirmative. "Following legal advice, it has been decided to initiate libel proceedings abroad," Gonzi said.

Watson - who has led expeditions in the Mediterranean to scupper Maltese tuna ranches - referred to the Maltese tuna industry as a "whole illegal enterprise" that has the full support of the politicians "who are being bribed by these tuna fishermen."

Watson said overfishing of Bluefin tuna was making the industry richer by driving prices up as the species is driven closer to extinction, but that the EU, and Malta, were doing little to enforce conservation laws.

"The EU has all the rules and regulations that protect our oceans, however, what they do not have is enforcement. We have a lack of will on the part of governments to enforce international conservation law. They need to get out there and arrest the bastards.

"But, they are doing this because too much money is passing hands under the table going to many politicians in Europe, just like in Malta; there is no question that Maltese politicians are on the take."

My response to the Government of Malta:

We are not concerned with this threat by the Maltese government at all. First, because libel is applicable only for accusations made in writing so the proper course of action would be slander because it was a spoken allegation. Secondly, you can't libel or slander a government. I did not mention a specific individual. Third the best defense against libel or slander is the truth. In my opinion based on what I have learned from our investigations into the tuna industry in Malta, I am convinced that there is sufficient evidence to back up my allegations that politicians in Malta receive monies from the tuna industry and I am convinced that there is large scale corruption within the Bluefin tuna industry itself. Thus I make no apologies for my statement and if the Maltese government wants to open up this affair to international inquiry, I say by all means, let's go to court, as long as it's a court outside of Malta for obvious reasons. I think this threat was made by the Maltese government to save face and to deflect from what I said. They know full well they do not have a case. If citizens were to be sued every time someone called out a government for corruption, the courts would be packed solid with cases. I've never heard of a government suing a citizen for making accusations of corruption, at least not in a democratic society. Overall this sounds like a guilty response to me. Honest politicians with nothing to hide would have simply shrugged it off. This government is suspiciously defensive.

So we shall see where this leads us. The chances of this actually going to court are ridiculously small; it is after all just a threat by the Prime Minister of Malta to save face in Parliament. Governments can’t sue citizens and certainly not foreigners for accusing them of corruption. It may be different but still highly unlikely that Prime Minister Lawrence Gonzi could sue me if I had stated that he specifically was accepting bribes or that he was corrupt. In my opinion he is a corrupt politician but he is also a public figure and he can’t sue me for having an opinion.

But it would be an interesting case if he tries. Could he sue me in a U.S. Court for accusing the government of Malta of corruption? That would make for an interesting precedent.

These two comments to Malta Today further illustrate the absurdity of the Prime Minister’s threat:

Posted by: not amused — 06/03/2012 23:54:28: "What's next? Gonzi taking legal action against the huge percentage of Maltese, who believe that corruption is rampant in Malta? We know what kind of enforcement is going on in Malta while the unabated construction chaos and the constant raping of Malta's countryside are proof enough of how easy our politicians favors can be swayed and bought."

The bottom line is this:

The Bluefin tuna, a highly endangered species is on the brink of extinction and the hub of illegal poaching operations is the Island of Malta. The Bluefin ranchers on Malta sue practically everyone who opposes them including Maltese journalists. They are suing us for obstructing them and releasing their unlawful catch of Bluefin off the coast of Libya. 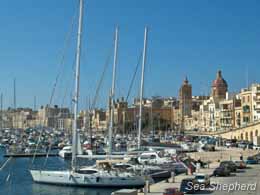 Malta landscape. Photo: Simon AgerSea Shepherd says what has to be said and we do what we must to defend this endangered species. We are not afraid of their threats both physical and legal. They are thugs and the entire Bluefin tuna industry is a criminal operation and it survives by bribing officials at CITES and by bribing politicians. That is my position and I have no intention of backing down from it.

So bring it on Gonzi, let’s go to court so we can unleash our detectives on your island to collect the evidence that we know is there to back up my statements in New Europe. But you and I know that you’re just posturing on this because you know there is no court available with the jurisdiction to hear your case and knowing this you can easily boast about suing for libel to make yourself appear the victim.

So let’s get to court if you can so we can subpoena the documents for the defense – things like bank records, financial transactions, offshore accounts, relationships, alleged favors received by politicians from the tuna industry, trips by politicians on yachts owned by tuna industry executives and other relevant connections.

Stay tuned for further developments as a the Prime Minster of Malta attempts to do what Japan, Norway and Canada have failed to do – Bring down Sea Shepherd and I, in the courts.

But of course Canada, Norway and Japan never had to deal with someone calling them corrupt - oh wait, I think we did that. They just realized how silly it was to go to court over it.