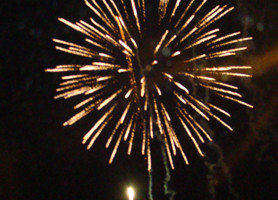 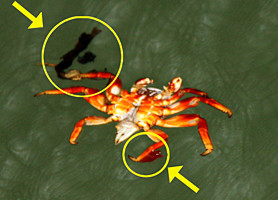 An endemic crab killed by fireworks

One of three reasons the Galapagos Islands were added to the UNESCO World Heritage Site in Danger list is the uncontrolled increase in tourism.  Last year, 174,000 tourists visited the islands. The local government constructed a new dock to accommodate the ever-increasing number of tourists.  The floating docks have no trash guards or trash receptacles, and an abundance of plastic trash and litter ended up tossed into the marine habitat below it during the celebration.

The fireworks display that was detonated over marine iguanas, endemic crabs, and local bird nesting habitats was only one part of the festivities.  After the fireworks, the event released several unmanned, untethered, open-flame hot air balloons that will become trash wherever the wind deposits them.  As well, the event's celebratory speeches revealed the government's plans for the future of Galapagos.

Toyota, Porta, and Pilsner were more visible than pelicans, iguanas, and sea lions. Toyota, an honored guest at the ceremony, is the fortunate financial recipient of the Ministry of the Environment's new solution to vehicle pollution.  The government will pay Galapaganean residents’ $3,600 to swap their old trucks for new trucks. 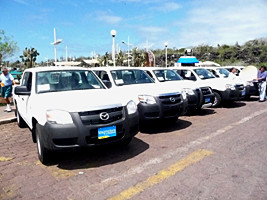 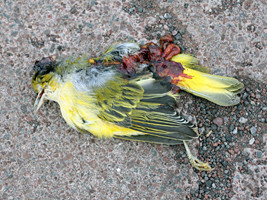 The question the government should be asking is not, “how many people can the Galapagos accommodate and entertain?” but rather, “how can we have an ecologically perfect Galapagos?”  A Galapagos where pelicans are not dodging fireworks, and crabs are not the casualties of a night of celebration. The Ecuadorian government can choose to manage the Galapagos as a moneymaking Disneyland Toyota town or as the ecologically priceless archipelago it is, at least for now.