Fit for the Emperor’s Banquet?

So with this is mind I am left completely baffled by the fact that the most talked about, controversial, and prestigious dish- Shark Fin Soup (which sells for over US$100 a bowl)-has the prime ingredient being a piece of half rotting flesh, that has been dried out in the sun in some god forsaken place, before being shipped here to Hong Kong. Upon arrival this expensive ingredient is then strewn across sidewalks, kicked about, and even walked upon. Some restaurant then buys it from a dealer in Sheung Wan for a handsome price and then rehydrates it by leaving it to soak overnight. The fin then has the crap steamed out of it and cartilage removed before being steamed again with a broth of ham, chicken, and beef to add flavor. The limp and stringy substance is then placed in a bowl and more stock is added, combined with corn starch, MSG, oyster sauce, soy sauce, and a myriad of other flavorings are also added before it is served in some fancy bowl and delivered to the table like the crown jewels and is greeted by a chorus from the diners of “whaaaa!” 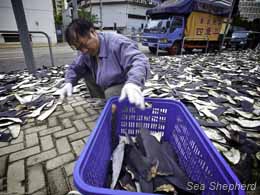 Photo: Gary StokesEnvironmental issues aside, this has got to be the greatest marketing campaign in the world. Take the most unappetizing object possible and add the ‘Emperor Banquet’ story, throw in some urban myths that it will keep cancer at bay and will increase sexual prowess and BINGO, an instant seller. Now add to that the fact that shark populations worldwide are being wiped out, and you’ve now created a market to sell an undesirable product. Very smart! With 5 star hotels promoting this to weddings as the “must have dish”, playing on the Asian face culture, the dish is sold en mass. Now with such a prestigiously branded image attached, the booming middle-income population of Mainland China all want some of the action.  This massive increase in consumption then creates an even greater demand of an ever-decreasing stock.

Environmentally, the impact of removing the apex predators from any ecosystem is devastating. Sharks have been around since before the dinosaurs, constantly evolving over time to become the most efficient and effective predator. Sharks have been responsible for shaping the development of all other species in the ocean that had to evolve just to survive. By removing the sharks from ecosystem, fish will overpopulate, as they have no natural predator. They will then wipe out their natural food source before dying out. The fish that were prey for the other species (now wiped out) then have no natural predator; hence the same pattern will occur again and again down through the ecosystem until we reach the bottom. Here we find plankton, and when plankton goes, so does 70% of the oxygen we breathe. This is why conservationists and NGO’s globally have been campaigning to stop Shark Fin Soup. Sharks are essential to the health of the oceans and the health of the world ecosystem.

The clock is ticking, will the diners of Shark Fin Soup wake up and realize that they are eating street food - literally - or will we wipe out a key species that may in fact result in wiping out ourselves?