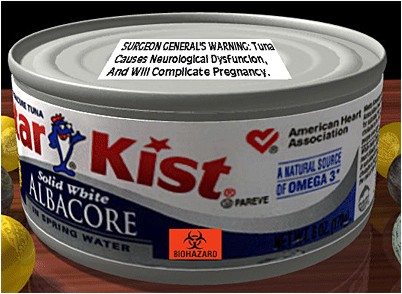 It seems that nowadays there are more than a few "scientists" willing to become corporate whores and biostitutes. Eco-Judas Dr. Patrick Moore (former president of Greenpeace Canada), is of course the king of the corporate whores, having sold out the environmental movement for a salmon-colored Porsche and a comfortable life style. His lobbying for the salmon farming industry was the foot in the door for "scientists" wishing to sell their endorsements to the seafood industry. And apparently, more and more men and women are cashing in their degrees for the benefits provided to those willing to sell scientific credibility to the highest corporate bidder.

This week brought evidence of another betrayal of knowledge, this time by 14 obstetricians and nutritionists who released a report that pregnant and breast-feeding women should eat at least 340 grams of fish and other seafood a week, because the benefits for infant brain development outweigh any worries about mercury contamination. These recommendations contradict U.S. government alerts warning women to limit seafood consumption due to concerns that mercury-which can harm the nervous system of fetuses-is present in most seafoods. This same group of obstetricians and nutritionists claim that the threat of mercury poisoning remains only theoretical, while the warnings have scared many pregnant women into not eating fish at all, robbing them and their babies of vital nutrients like omega-3 fatty acids, known to help brain development. This group is akin to the intelligent design people who claim that evolution is only theoretical. In fact, the health claims of omega-3 fatty acids are largely theoretical, and the evidence of mercury levels in seafood is an observable fact.

To make matters worse, the recommendations were released in partnership with the National Healthy Mothers and Healthy Babies Coalition, whose members include the Center for Disease Control and Prevention, the U.S. Department of Agriculture, the March of Dimes, the American College of Obstetricians and Gynecologists, and others. According to these "experts," the nutrients in fish and seafood are important for brain and motor skill development in children and can help prevent postnatal depression in mothers. The group urged that women who want to become pregnant, are pregnant, or are breast-feeding should eat at least two to three servings of seafood a week. It did not state a recommended upper limit for consumption.

According to Dr. Ashley Roman, a professor of obstetrics and gynecology at New York University Medical Centre, "There are some fish that have been shown to be higher in mercury and other important trace elements such as shark and swordfish. Those might be sources of fish women might want to stay away from. But the vast majority of fish out there present in the U.S. diet, those are generally very healthy fishes." It appears that the most convincing piece of evidence to back up the findings in this report come from the fact that the coalition received $60,000 from a seafood industry trade group. Despite this contribution, the group of scientists-for-hire defend the "independence" of their work.

A little trip over to the Got Mercury website offers a different perspective.

This website reports what would happen if, for example, a 105 lb woman and a 200 lb man were to go to a sushi bar just once during the week and have the following meal: 2 pieces of tuna, 2 pieces of mackerel and 2 pieces of halibut. The woman would be consuming 260% percent of the Environmental Protection Agency (EPA) recommended limit, while the man would consume 130%.  Say the next week, they go to a fancy restaurant and the man orders Chilean Sea Bass and the woman orders swordfish. Each has an 8 oz piece of fish. The man would consume 140% and the woman would consume 660% of the EPA recommended limit. You can go to the Got Mercury website yourself and enter your own weight, the type of fish, and the amount consumed to get an estimate of the amount of mercury consumed. What this means is that these so called experts are not only selling out science for money, but they are also irresponsibly placing human lives at risk.

Click here for information from the U.S. government on mercury in fish and its effect on pregnant women.

There are many healthy alternatives to fish for omega-3, including tofu and other forms of soybeans, pumpkin seeds, canola, walnuts, flax seeds, and their oils. These contain alpha-linolenic acid (LNA), which becomes omega-3 fatty acid in the body. In addition to methyl mercury, fish contains high amounts of PCB's (polychlorinated biphenyls), dioxins and other heavy metals. You don't have to be much of a scientist to understand that eating a substance containing methyl mercury, PCB's, dioxins and other heavy metals is simply not beneficial, especially when there are healthy alternatives like organic flax oil.

Why is mercury a problem?

Some people argue that since we have been eating fish for thousands of years, it must be healthy. After all, mercury occurs naturally in the environment. So what's the problem?  Click here to read more about the effects of mercury.

Even the FDA and the EPA were under pressure from the fishing industry to not recommend complete abstinence from seafood. It stands to reason however that if a food contains any levels of toxic materials, it should not be consumed. Why would we eat fish to obtain omega-3 for brain development in unborn children and risk genetic brain damage at the same time, when we can obtain omega-3 from organic plant sources?

Yes, some fish contain smaller quantities of toxic substances than others, but should human beings really be indulging in this kind of toxic roulette?