Feeding fish to Chickens and Pigs

Feeding fish to Chickens and Pigs

Guest Commentary by Jennifer Jacquet of the Sea Around Us Project
http://www.seaaroundus.org/project.htm and the
UBC Fisheries Centre http://www.fisheries.ubc.ca/ in Vancouver, B.C.

It is one thing to grind up wild fish to feed to farmed fish, but it is quite another to grind up these perfectly edible fish to feed factory-farmed pigs and poultry. After all, when is the last time you saw a chicken catch a fish?

In the not-so-distant past, pigs and chickens ate grass, some grains, and food scraps. Today, in the throes of a perverse industrial food system that favors cheap protein and quick growth (with often astonishing results such as Mad Cow disease), we now feed farm animals lots of small, tasty fish.

Each year we feed 14 million tons of wild-caught fish (including anchovies, sardines, mackerel, and herring) to pigs and chickens around the globe. That amounts to 17 percent of all the wild fish we catch. Pigs and chickens eat double the amount of fish that Japan consumes annually and six times more seafood than the entire U.S. population eats each year.

Is it efficient to feed these fish to pigs and chickens? Moreover, with rampant overfishing a global problem, is it ethical? This is not the same question of whether we should feed grains to cattle, which leads to an overall loss in energy but also a conversion of carbohydrates to protein. In the case of fishmeal fed to pigs and poultry, a perfectly edible (and rather scarce) protein source is being consumed and converted (with an energy loss of ~90 percent) by simply another protein source.

What to do? In Peru, home to a large fishmeal industry, scientists and chefs came together to initiate a program to "discover the anchovy" and turn fishmeal into a meal of fish. But much of this program's success hinges on government action.

"We have the best oceanographer in the country at the Marine Research Institute and he insists we have to leave 5 million tonnes of anchovies in the water," explains Patricia Majluf, the architect of the Peruvian anchovy initiative. "The government also now insists on establishing the anchovy quota at the beginning of the season rather than the old way telling the fishermen when to stop, which led to lots of overfishing."

In places where government action is unlikely due to the mantra of free markets, it is more likely we would see some sort of awareness program, such as a seafood wallet card for pigs and chickens (who don't read).

"Better yet, we will tell pigs and chickens they can eat only what they catch," says Daniel Pauly, Director of the University of British Columbia Fisheries Centre.

Maybe we should feed pigs and poultry (literally) Michael Pollan's advice: Eat food. Not too much. Mostly plants.

And we should do the same. 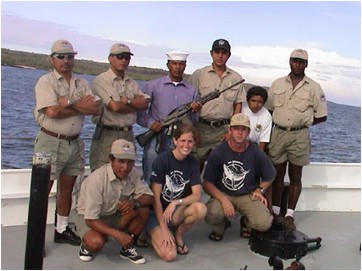