Fear and Loathing of Sharks in Western Australia

This was simply an opportunistic knee-jerk reaction to media histrionics over the deaths of five surfers this year.

Yes it is a tragedy that these five surfers died, and it is sadly true that shark attacks have increased, although relatively by very little, but instead of responding with a hysterical nonsensical pogrom on sharks, maybe the Premier should have taken a serious look at why there has been a slight increase in shark attacks and taken measures to solve the problem without causing blanket damage to bio-diversity in our oceans.

Barnett holds a degree in economics and majored in statistics so he should certainly understand that statistically shark attacks and fatalities are not that frequent and make these animals less dangerous to the public than ostriches, dogs, chimpanzees, elephants, mosquitoes, bees, ants, wasps, deer, horses, cows, and jellyfish.

Statistically the chances of dying in an automobile accident are astronomically greater than being killed by a shark, and there is a far greater possibility of being struck by lightning while playing golf than of being attacked by a shark at the beach.

Statistically, sharks are simply not a serious factor affecting human mortality compared to almost every other human activity including the fact that on average twenty Australians die each year falling out of bed and another five died while getting into their bathtubs.

On the other hand, we humans slaughter some 70 million sharks annually primarily to supply a few affluent Chinese with a bowl of tasteless soup. 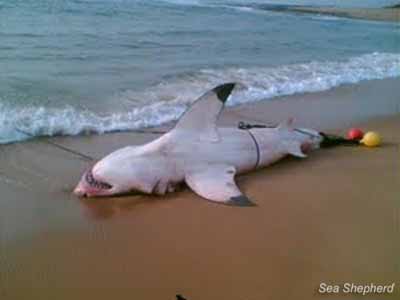 The truth is that hatred of sharks is a manufactured hysteria thanks primarily, although I’m sure without malice, to Steven Spielberg, who resurrected a long-extinct Megalodon shark as a vicious killing machine in Jaws. The notion of such a shark living today is as fictitious as being attacked in modern times by a Tyrannosaurus Rex.

Targeting Great White sharks means targeting an endangered species and is no different than calling for the extermination of tigers, rhinos, and whales. This is the same kind of shallow-thinking, ecologically ignorant mentality that was responsible for the extinction of the Tasmanian tiger.

If the Premier really wishes to reduce shark attacks he should address the human factors that contribute to shark attacks.

There are three primary reasons for increased shark attacks in the sea off the coast of Western Australia.

The most obvious reason is that blood and dead bodies in the water attract sharks and the ships that transport livestock are a primary source for this attraction. Dead animals are irresponsibly tossed overboard. The daily flow of urine and feces contains the smell of blood. Common sense dictates that if you pour blood into the sea, sharks will respond.

Being an economist, the Premier most likely has decided that the demands of agri-business and Muslims wanting live animals so they can slit their throats while pointing the eyes of their sacrifices towards Mecca, is more important than Australian sharks or Australian surfers.

The second reason is that into these same waters where the sharks are attracted there are surfers, and from below, a surfer on a board looks very much like a seal and not just any seal, but a relatively motionless seal, and to a shark that form flashes like a neon sign saying, “EAT.”

Even so, most shark attacks on surfers are aborted once the shark realizes that the surfer is not a seal. Still it can be bad news for the surfer.

Solution: Instead of spending excessive tax dollars to exterminate sharks, funds can be invested in creating shark deterrent devices for surfboards and for shark-spotting programs like in South Africa where people are hired to watch the surf and to sound an alarm if sharks are in the area. Research should also be carried out on shark behavior and region-specific environmental factors like the effect of discharged effluent from livestock vessels.

The third reason is overfishing, as the sharks in our oceans have their food resources diminished more and more each year. Those who argue that seals should be culled to lower shark populations are in fact encouraging more attacks because fewer seals will mean fewer meals, and thus more hungry and desperate sharks.  If you deprive humans of food, they also are inclined to desperation and, as history clearly demonstrates, starving humans have a tendency to attack and eat other humans. 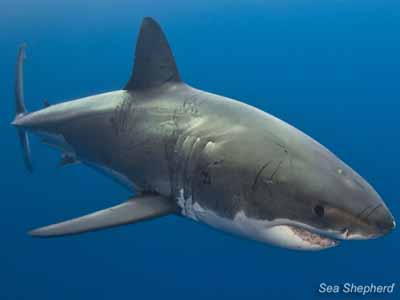 Great White Shark
Photo: Emma CasagrandePremier Barnett has unfortunately already demonstrated in other areas that he prefers extremist solutions. When granting authority recently to police to search and seize property without any suspicion or evidence that a crime was committed, a member of the Barnett government voiced support of this policy by comparing it to the “effective” security measures taken by Adolf Hitler.  Premier Barnett defended the statement by Liberal Party member Peter Abetz by saying that Abetz had made a valid point.

And now the policy that Premier Barnett wishes to make is to implement a “final solution” to exterminate sharks in the interest of security.

I have surfed, swum and dove for forty some years with sharks including Great Whites and Tigers and I have never met a shark that threatened my security as a human being.

I have however met many politicians who have.

The seven most dangerous sports in the United States:

Annual Average Cause of Deaths in the World: